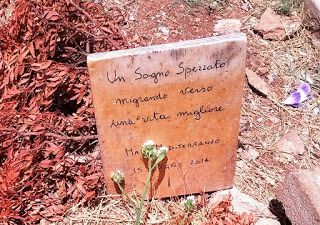 Ali does not exist for the many that prefer to put news of an AS Roma player’s great game or the book on Trump on the front page. Ali deserved more space instead. Or rather, Ali deserved to pass unobserved because he lived.

It is only thanks to a small group of people who still have a sense of justice that we have succeeded in knowing Ali and that we know he – a 29 years old Tunisian man – was driven to suicide because he was not accepted and welcomed. For months thousands of Tunisians who have disembarked at Lampedusa have been repatriated or taken to Sicily, and rejected in a systematic way. Many, therefore, have started to escape the hotspots out of fear of being returned to the hell that has been their life before, searching for any way to escape the island.

Ali found himself at Lampedusa at the end of October, and the newspapers should have written – in capital letters – that to be deprived of one’s personal liberty for days and days, without any judicial intervention, is a grave violation of the law. Ali was not mad. Those that knew him on the island reported that he had felt scared, he did not want to be taken back, did not want to disappoint his family, he wanted to live. Together with others, he decided to escape the hotspot and live invisibly. But he could not sustain this condition and gradually crumbled under the pressure. His vulnerability and his need for care and attention were obvious. But this system does not account for the vulnerable, and does not account for their need for care. Ali, like many others, killed himself because he was invisible, unwell and tired. He was another victim of the hotspot system, another victim of institutional indifference, another victim of this Europe.

Unfortunately, Ali is not the only victim of this beginning of the new year: alongside him at least another 64 people have died in the first boat wreck of 2018 off the shore of Libya. The bodies of six women and two men were brought to Catania by the boat Diciotti on the 8th of January, together with 86 survivors. And yesterday another 27 survivors who were rescued by the boat Aquarius of Sos Mediterranee disembarked in Pozzallo.
As always, the deaths receive the farewell and commiserations from the same political exponents responsible for the massacres, those who issue heart felt statements, always the same and always banal. But Italian journalists fill the pages of newspapers with stories of migrants protesting in the centres, underlining the frivolous motivations of these ungrateful people. At this time, there were news of protests in Naro, Agrigento, Castelvetrano and Mazara and again in Isnello and Borgetto. No journalist asks about the real motive of these protests, no one questions the involvement of the managing entities in the same zones, and the voice of migrants is never heard.

Every day we collect testimonies of situations of abandonment, neglect and poor reception that lead to protests. The numerous cooperatives that manage the CAS* signal us the difficulty of managing vulnerable subjects who need to be accommodated in a SPRAR** centre. But the waiting time is extremely long and many complain about the scarce attention from the central service.

The other night some Lampedusa citizens prayed together with young Tunisians for Ali and his family, remembering him for who he was: a 29 years old young man that wanted freedom, a future and above all wanted to continue to dream, even though it is forbidden for many.

Farewell Ali, continue your journey, where you will not meet neither jailers nor barriers.

**SPRAR – System for the Protection of Asylum Seekers and Refugees – Second-Line Reception Centres.

Lampedusa: „I prayed for the whole journey“, says the doctor aboard of the speedboat