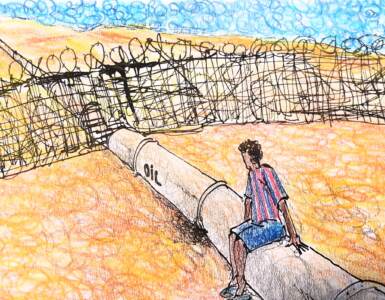 Badu arrived in Italy three years ago – as a minor – and thanks to his resilience and the support of various associations and volunteers, he quickly became independent. Last year, he managed to find some jobs without a contract as a kitchen hand and house painter.

With the arrival of the pandemic, Badu – a foreigner without a contract – was one of the first to enter the vortex of anonymity and invisibility. No provision was made for him or any other person in his situation. Today, in order not to beg, Badu is forced to go and harvest vegetables in Puglia, and he feels betrayed by the friends who had supported him and helped him to become independent.

He says with regret: “It is true that I did not have a contract, but at least I could walk with my head held high, despite the hard and underpaid work, and as I had no other alternative, I got used to it. I could pay for an illegal shack, which at least was a roof over my head. When Covid came everyone turned away, and I was one of the first people to end up on the streets. And then even others ended up on the streets, even white guys. The crisis is affecting everyone, but we were the first to pay its high price, so I decided to leave Agrigento and follow some friends to Puglia to do harvesting; they told me that it is strenuous work, and that we’ll be treated like slaves, but I hoped at least I’d never have to beg and sleep on the streets.”

The pandemic and the economic crisis

With the outbreak of the health emergency, a lot of migrants, many of whom were unaccompanied minors who have now come of age, have found themselves completely disregarded by government. This is aggravated by the impossibility of renewing their residence permits due to the 2018 security decree, which has rendered thousands of migrants illegal. Many very young workers without contracts, like Badu, have been turned away by employers for fear of contagion or because of a smaller job market. But the primary causes of these problems are migration policies that only increase discrimination and hardship.

Caritas and other aid agencies are hardly able to meet the needs of all the people in difficult situations who turn to them. Young foreigners are the last in line, receiving only the crumbs left by the many Sicilian families who have also sunk into poverty.

Access to ordinary medical care is a problem for everyone at the moment, but even more so for those who are undocumented. There are cases like Larry’s, who despite needing an operation, which has been continually postponed, lives on the street, getting worse with every passing day. Psychological problems and alcohol or drug abuse are also real dangers, which would plunge even their last hopes into the abyss.

But all this is no longer news; we are too caught up in the criminal crisis set up by politicians whose only interest is to increase their own slice of power at the expense of millions of people.

The deaths at Europe’s borders

There is no indignation either for the people who continue to die on their journeys across inaccessible borders, be it the Mediterranean Sea or the snowy countries of Eastern Europe. On the Balkan route, the harshness of the climate is compounded by the ferocity of the border police – Italian and European – who are the armed manifestation of the inhuman policies of rejection.

In the Sicilian channel, only some of the people sent across the sea by traffickers are rescued and brought to Europe, while others either die or are sent back to the hell of the camps in Libya. Last week many people landed in Lampedusa, and 422 were rescued by the Ocean Viking and disembarked at the port of Augusta.

For those who landed, another odyssey begins, consisting of quarantine ships, Covid centers and, for many, rejection and repatriation. The people who arrive from the sea – especially men – are moved onto the ships Allegra (moored in Lampedusa) and Rhapsody (moored in Augusta) to spend the quarantine period with this discriminatory practice, which is also extremely wasteful of public money. The prefectures are increasingly confused, because there is no common line of intervention and everything is left to the discretion of the managers.

That’s why we see Covid centers being closed and then reopened, where unaccompanied minors, families and people with vulnerabilities often find themselves in dangerous conditions, without specific safeguards and without legal information. We received reports of people who – in some centers – could not change their travel clothes for days.

These practices are repeated over the years and leave their mark on people.

The Prefecture of Agrigento issued a call for tenders for the management of new Covid centers, but some cooperatives which were managing facilities previously closed down by the Prefecture were also invited to participate. The pandemic has also further extended the time it takes for police to issue and renew residence permits, not to mention the postponement of hearings on appeals for protection, which can take years.

Humanity died a long time ago, and it was not Covid that killed it, but our indifference. The pandemic is the irrefutable evidence of the inequalities and social injustices of our times.