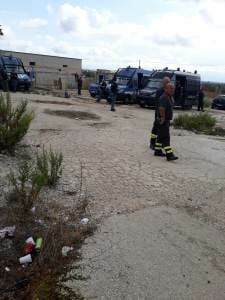 We are at war, a dirty war with Goliath on the one side – with economic, financial and military power – and David on the other – the poor, the exploited, those relegated to the margins. We stand between these two sides, divided by the desire for the power and privileges propagandised by Goliath’s party on the one side, and the desire for the freedom to live a dignified life on the other.
But this is an uneven war in which Goliath uses violence, money, military methods, propaganda while David does not even know he is at war.

But we can make a difference, and it’s time to wake up from this slumber, to leave our fear behind and choose on which part we stand, because Goliath is bulldozing human rights in all his power, arrogance and stupidity; he’s taking aim at the democratic basis of a Europe born from the accumulated butchering of Fascisms and Nazisms.
This world war takes its victims everyday, many more than we find out about every now and again: in the sea, the desert, in the Libyan prisons.

This is a war that kills within our own country, in our countryside, in our workplaces. You can die of work in Italy. All previous governments have crushed workers and their rights, creating the basis for a deep social conflict, fanning the waves of xenophobia and racism.
The economic system needs bodies to utilise in order to keep going, and this is why they do not want that human rights are defended or that we speak about real people.

Goliath has perfected his weapons in the Sicilian countryside. The migrant workers have had their own humanity and dignity removed. The grape harvest is currently underway in Alcamo, and it will continue till the beginning of October. The local council, like every year, tendered a contract for the hosting of 70 workers in the gym. They must have their documents in order and pay €2/day to take a hot shower and have a meal offered by Caritas.

Again this year the bid was one by ‘Badia Grande’, a cooperative the runs centres across Italy. Whoever does not meet the criteria to access the gym sleeps in the streets next to the piazza or in abandoned buildings in order to remain invisible. And people die from this invisibility, such as the young Tunisian man who accidentally fell down the stairs in an abandoned building in Alcamo. A building that was used as a night-time refugee for the invisibles, the people have to disappear by night and be exploited by day.

At nearby Camppobello, where the olive harvest will begin within 15 days, the situation is still critical because this year yet again, with everyone’s blessing, there will be an ’emergency’. The usual emergency structure is being created ad hoc. The police have begun to evict the farmhouses abandoned for years which the workers have occupied in order to not remain under the stars at night, after they have been exploited at €3/hour during the day. Evictions ordered from above that continue the security propaganda rather than respect for the law. It’s a shame however that no law has been passed for 15 years relating o the employers who “abuse” people harvesting olives without contracts, rights, and on famine wages. After years of attention by civil society, putting a band-aid on the shameful lack of institutions, this year will be even more complicated for the workers, inasmuch as the “Fontane d’Oro” ex-oil plant will be available only for up to 4 days by around 100 people, hosted by the Red Cross, who have provided four large tents with around 30 places.

The workers will need to pay €3 per day, but there is no tender and thus the dynamics of the management are not known. The council has not fixed the toilets which are in a shameful condition, like the showers which currently only have cold water because the money wasted by the council of Campobello di Mazara last year did not have any outcome. Furthermore, there isn’t even Caritas to offer a meal, like in Alcamo.

And yet again, the Bilateral Agricultural Body of Trapani (EBAT) has established a payment of €4 for each worker per day for the businesses’ security needs: yet again, a hand extended to those who exploit. But it seems the trade unions haven’t seen any exploitation in 15 years, given that they have never raised their voices and have nothing to say. The prefecture, on the other hand, has adopted a hard line: no one should be in the street, because the orders from above are very precise. But the olives need to be harvested all the same and so you have to be strong with the weak. The workers will need to be hosted by the businesses and will need to go and set up their tents on their land. Who will control the conditions of these settlements? Aside from the total chaos, no one knows which businesses – aside from one for now – are ready to host the workers.

In the meantime, the situation is increasingly worse in the hostels. SPRAR* projects that should have begun in July are still blocked due to a missing signature from the Minister of the Interior; those which have already begun expect funds from god known when, and the managing entities are in difficulty, creating confusion among the residents. Two days ago in Palermo there was a small rebellion due to the missing payment of ‘pocket money’, calmed down with the words of a manager telling the young men: “we’re starved just like you, we’re all in the same boat, they don’t pay us either.”

As far the CAS are concerned, the prefecture is creating new directives to close the excess centres, even if they are also trying to function to some extent. The residents are thus transferred like postal packages, ending up in centres far from inhabited centres, almost immediately turning invisible.
Some of the managing bodies, despite closing due to the difficulties of this kind of work, are recycling themselves, for example by becoming the managers of the Hotspot at Lampedusa, the Hotspot that should have closed and instead is continuing under new management. The cooperative is Facility Service, which had serious problems at Ciminna as we have reported. The new management of the Lampedusa Hotspot has been characterised by a lack of medicines and bed sheets, as we learn from the island itself. But fortunately there are not the high numbers of people and therefore no emergency. The new managing body is operating even while the restructuring of the Hotpot is still underway, and the Tunisians who arrive are detained for a few days before being transferred to the Milo Hotspot where they are then subdivided up between those to be deported, those to be notified with expulsion papers, and the few fortunate asylum seekers.

The remaining functioning parts of the system are about to be hit by the decree voted through yesterday by the council of ministers which – if it enters into the law books despite the extremely serious and evident aspects of constitutional illegitimacy – will only serve to increase the chaos and insecurity through erasing people’s rights and dignity. This insecurity is already taking its toll on asylum seekers because the news is arriving in the centres that many of them will have neither a permit to stay nor a future here. In some of the centres the residents have even been called into meetings by the managing bodies to learn that there is no hope and they need to figure things out on their own, creating panic and desperation.

Goliath is strong and unscrupulous, while David is drowning. Only we who stand in the middle can decide whether we will support those who are weaker than us and build a common front against those who starve and exploit us. It is down to us to defend democracy, the constitution and life itself, taking strength from the desire for freedom held by so many young people who we meet on the streets.

New migrant tragedies in front of the Lybian coast. The patrol boats given to Gaddafi have turned their motors off.

Lampedusa, 3 October 2013: The Shipwreck of Truth