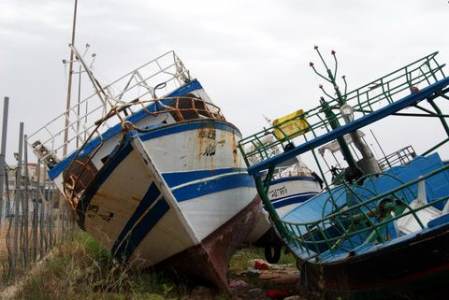 Since the establishment of the League-Five Star government, a belief is making headway in public opinon that, with the ports being closed to ships that have rescued migrants, the arrivals – the famous landings – have ended.

Chapter closed. It was enough to simply pick off the rescue ships and avoid them landing until the entire problem of irregular migration is resolved. The numbers seem to prove them right: 80% less arrivals compared to 2017. Thus we find ourselves with Salvini, the Minister of the Interior who brags about himself as the founding father responsible for the (quasi) total stop to the arrival of these undesired subjects. But is it really like this?

The Mayor of Lampedusa – the site most easily reached from the Libyan and Tunisian coastline, seems to be in disagreement. In an interview with Vanity Fair, he explains that despite the establishment of the new government, the landings have never stopped. He tells of the arrival of around 250 small vessels, containing around 14 migrants each. And this isn’t the only case. Along the Agrigento coast as well, the so-called “phantom landings” have continued for around a year and a half, details of which are unknown. Along the coast of Syracuse there have also been landings of boats with around 30-50 migrants each. Arrivals have also been noted in Calabria and south Sardinia.

Some of these migrants are intercepted once they reach dry land, and then identified. Last week a group of 23 people, including 12 unaccompanied minors, arrived in Lampedusa and were then transferred to Porto Empedocle, where all of them (except for the minors) received a 7-day-paper despite manifesting their desire for international protection. The latest result of the government propaganda has thus been to make people believe that no one is arriving thanks to the elimination of the NGOs from the Mediterranean and to the closure of the ports, when in reality the number of spontaneous landings has increased, opening up new dynamics and chance arrivals.

The reality is thus the increasing efficiency of the so-called factory of irregularity, contrary to what one might deduce from the League’s slogan of “no more illegal immigrants” – a chorus now joined by the Five Star Movement. If our government thinks that threats and their actions might diminish the desire to arrive in Europe, they are making a grave error. I remember when I was in Palestine, the great expert on borders, Doaa Elnakhala, explained to us about his days crossing the wall that divides Israel from the Occupied Territories, even if only to get an ice-cream or take a walk along the cost by the same sea that anyone can see from the hills of Palestine, even if technically and legally prohibited from young Palestinians.

The young researcher concluded by reminding us that wherever there is a wall, a ladder will be leaned against it. Without doubt, one isn’t talking about ladders here, but the wall is instead a desert and a sea, crossed only by luck, without even any hope of being saved if the worst happens – and stubborn European governments that have made immigration into nothing other than an issue for propaganda.

Staino’s cartoon (pictured) is rightly famous – in which a young woman asks a migrant with concern why he has crossed the sea if it is so dangerous. The migrants replies that the reason lies in the “maybe”, in the possibility that the worst might not happen. And this should make us all reflect on how intolerable it is that anyone should be forced to make this kind of choice, given that there are no safe and legal ways to make the journey to enter Europe.

All of this forces us to ask why the ports should be closed, given the impossibility of stopping the arrivals. Obviously the clearest response is: money. And it would not be a thoughtless response, even if we need to then clarify what money we’re talking about. Certainly these aren’t the famous millions saved by the state (even if in reality much of the money comes from the EU) that continues to increase its own deficit, hoping to boost the economy, forgetting how many workplaces have been created through the reception system. Workplaces that have managed to help young people stay in southern Italy, people who otherwise would have emigrated north or outside of Europe.

So what money are we talking about? The reality is, unfortunately, another one entirely: these policies are only there to hide their own failure. But providing the illusion of efficiency helps to win votes in this permanent electoral campaign. Above all, the mechanism beneath it all for more than twenty years, beneath the regulation of migratory flows, has been the creation of an economic system that provides bodies to work in any condition and at any pay, allowing the price of labour to be lowered.

In the farms of southern Italy, these mechanisms have created phenomena such as work-gang organisation (“caporalato”), assisting those who have made exploitation their trade. In some cases these are invisible people, who live in distant shanty towns, pushed out from inhabited centres. It is increasingly complicated to bring attention to these issues. In this sense the reason for the new immigration and security decree seems clear enough, eliminating as it does the permit to stay for humanitarian reasons, de facto increasing the number of irregular persons, and expanding the Extraordinary Reception Centres (CAS), and attacking the SPRAR centres. The emergency centres (as is already the case for some, as at the CARA of Mineo) will become large sites for the collecting of manpower to be exploited within the agricultural and building sectors.

And this is not to even talk about a whole other side of the hidden economy, a more shadowy and frightening one, of prostitution, of the sale of organs and of other activities connected to organised crime. Those policies that propagandise the end of immigration are simply criminal policies.

Arson attacks on Lampedusa and attempts to increase tensions.

Solidarity Is Not A Crime: Six Tunisian Fishermen Return To Freedom

”Dear Salvini, I — An Eritrean In Exile — Today Feel Hatred And Fear In Italy”

Immigration:152 migrants in the Province of Syracuse