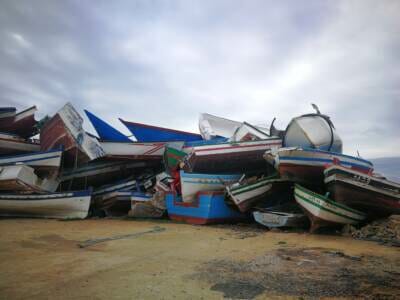 In the face of the systematic violence against migrants – victims of refoulement, killed at the borders or disappearing along migration routes – the commitment of women – migrants, activists, mothers and sisters – represents a fundamental contribution of testimony and denouncement of border locations through the practice of active remembrance and solidarity.

Missing migrants in the Mediterranean and the search action for women

Two hundred and fifty is the number of migrant deaths recorded by the IOM since the beginning of 2021. This number also includes many female migrants: indeed, in these very days, for the occasion of Women’s Day on 8th March, the IOM remembered the thousands of girls and women who died or were lost along the migration routes. These figures show that since 2014 at least 1,074 female migrants have lost their lives or gone missing in the Mediterranean.

And not only at sea, but also once they have landed in Sicily, where they are victims of the violent and ghettoising reception system. In the last few days Souad, a Tunisian woman with mental problems who was held on the quarantine ship Adriatica, died on the island, when, once she got ashore, she threw herself out of the window of the center that was supposed to receive her.

As an observatory on Sicily and the central Mediterranean route, we monitor the constant and continuous shipwrecking of both small and large boats that leave Libya or Tunisia and do not reach the Sicilian coast and, more and more often, are not rescued in time. The criminalisation of NGOs, the blocking of humanitarian ships and the suspending of valuable “search and rescue” operations in the Mediterranean, which would make it possible to counter the EU’s death policies and save the lives of many people, play a fundamental role in this.

In these very days, the NGO Mediterranea has ended up in the inquiry involving four people accused by the public prosecutor’s office of Ragusa of favouring illegal immigration and violating the rules of the navigation code.

The last known shipwreck in the Mediterranean dates back to the night of 8th March in Tunisian waters. The boat had left Sfax loaded with migrants, mostly of sub-Saharan origin, who were bound for Lampedusa. On the 9th of March, newspapers publicly reported that 193 people were rescued by the Tunisian Coast Guard but at least 39 people lost their lives – including at least 9 women and 4 children.

These tragic stories also concern the families who have been left behind. Indeed, migration is almost always a family or group endeavour, in which people undertake risky journeys with the dream of supporting the lives of those who stayed at home, who have to live with the economic, social and, of course, painfully emotional effects of the loss. There is a complete lack of institutional support for these families, including information on how to search for their loved ones or how to proceed with making official reports to the relevant institutions.

Amongst the family members who have lost a loved one in recent years is Daoudi, a Tunisian mother who has not stopped searching for her son, Hamdi Besbes, since July 2020. He was a 26-year-old mechanic on a fishing boat which arrived in Lampedusa this summer and has been missing ever since. For the last 7 months we have been trying to support her in her painful search, which has led her to take part in demonstrations at Tunisian institutions and to launch an appeal to demand truth and justice for her missing son and for all the people who have gone missing in the Mediterranean.

Jalila is also a mother of two Tunisian migrants, a woman who asked to come to Palermo to witness the exhumation and repatriation of the bodies of her two children, Mohamed Hedi and Mardi Hedi, who died in a shipwreck in Sicily in 2019. Jalila is not alone – her daughter Nourhene and the girlfriend of one of her deceased sons are with her – to remember the stories of the two young people.

Besides them, there are countless other mothers and sisters – like Anissa, Fatma and Amal – searching for missing people, held in detention centers, guests in reception centers or stranded on quarantine ships. In Tunisia, a nucleus of women has been formed, who for years now have continued to demand truth and justice regarding the disappearances and violence that occur in the Mediterranean. They are supported by Italian associations too.

Women – Tunisian and Italian, European or African, who with their actions and with their voice, denounce the European politics of death.

“A bridge of bodies” and the women of the borders

The tireless struggle of these women is linked to the Manifesto of “A bridge of bodies”, written by Lorena Fornasir, from which the initiative of the 6th of March was born at various borders of Italy and Europe.

On this day – from Trieste to Ventimiglia, from Claviere to Sicily, to Berlin, in Ireland and in the Netherlands – the bodies of women and men gave a symbolical shape to a bridge to cross the borders, in a day of denouncement of the violence suffered by migrants and the reclaiming of freedom of movement.

The protagonists were the women in solidarity to whom Lorena’s appeal was addressed, with the intent of uniting activists at borders with women related to the migrants, the sisters and mothers who remain waiting in their countries of origin.

In Trieste Lorena is involved in treating the wounds of those crossing the Balkan route. She and her husband Gian Andrea Franchi are founders of the association Linea D’Ombra, which supports migrants by medicating them, treating the signs of their tortures, and offering food and assistance. This commitment to care – political and not just humanitarian – is aimed at migrants who manage to arrive in Trieste, despite the numerous refoulements from Slovenia and the violence of the Croatian police, financed by the EU and Frontex. For their denouncements and work of solidarity at the border, Gian Andrea and Lorena were recently charged with aiding illegal immigration: solidarity in Trieste has also been turned into a crime.

Right in the wake of these events, initiatives were organised in Sicily too, in so much as it is the southern border of “Fortress Europe”, on the “A bridge of bodies” day on the 6th of March. In Catania, Palermo and Syracuse, women and men held garrisons and press conferences in solidarity to remember the violence of the policies implemented here, the deaths at sea, the blocking of rescues and the segregation imposed on migrants in times of pandemic and otherwise, claiming care, presence at the borders and the works of storytelling and remembrance as practices of resistance and struggle.

The work of remembrance regarding what happens on both shores of the Mediterranean is increasingly necessary. In Sicily we receive reports of people who have disappeared after taking the sea route every day: relatives, especially mothers and sisters, looking for a loved one. Every day we are active, we weave networks, try to provide answers, listen to stories and testimonies, contact institutions and organisations, and personally search for answers to these unburied pains.

We are not always able to provide solutions, to propose effective ways forward, to say with certainty whether a person is dead, whether they are in hospital, whether they are safe or whether they have ended up in the limbo at the sea border. No matter how much we resist the curtain of indifference, people continue to disappear, and the institutions do not make any effort to trace the disparus at the borders.

This is why it is essential to carry out active work of remembrance. A few days ago we were with other activists at the Muslim cemetery in Messina, where we laid flowers on the grave of Abdallah Said, a Somali minor who died of encephalitis in Catania after being held on a quarantine ship, an inadequate environment where his health conditions worsened.

On the same day at the cemetery we attended, alongside some Gambian boys, the burial of the body of Illah Dansoko, a Gambian boy who died in the San Berillo district of Catania due to ill health and state racism.

We laid down flowers and a sheet of paper with their names and dates of birth and death, remembering their stories. Out of respect for their dignity and their rights we collect these emblematic testimonies of European responsibilities. And in these acts, in front of dormant consciences and complicit institutions, we claim that the real crimes are not the practices of solidarity of NGOs and workers but the European migration policies perpetrated along borders, in quarantine ships or in European cities.

Active remembrance as a transformative practice

The multiplication of migration-hostile zones has created policies of rejection and denial that kill in an increasingly active way. So, from the Mediterranean border to the Balkan route, the valuable commitment of women like Lorena and Daoudi continues to represent a form of opposition to the indifference that revolves around the systemic crushing of migrant humanity. Without a struggle for recognition, these people and these bodies would be left to oblivion and become anonymous, as well as taken away from their families.

In the collectivization of individual pain and the amplification of the brave voices of women, the denouncement of abuses and violations takes place: crimes that have generated spaces of conflict and political action as a response, in which the recognition of migrant subjectivity, of their lives and their rights are gambled.

So, in collecting the stories of migrant women and men, let us make remembrance an active and transformative practice of these conditions of violence in the Mediterranean: an exercise in counter-narration and solidarity, a constant monitoring of the border. In the place where we have a duty to stay with our bodies and our voices. 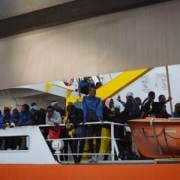 Messina: The Tent-City at PalaNebiolo Finally Taken Down. For Three And A Half Years It Housed Asylum Seekers In Shameful Conditions

A War on Migrants: The Palermo Landing

From Pozzallo to Mineo via Ventimiglia. Migrants detained, deported and isolated.

Miss, I’m Sorry, But I Have To Inform You That Your Son Has Been Killed

Letter From a Mother