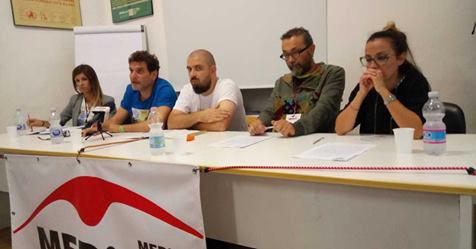 In Catania on October 3rd the team from MEDU (Doctors for Human Rights) presented the results and data relating to years of the project On.To, organised for the specialised assistance of migrant survivors of torture and inhumane and degrading detention. The chosen day is not incidental: October 3rd marks the fifth anniversary of the Lampedusa shipwreck that claimed 368 lives, and MEDU decided to remember the event by launching an appeal to not consider Libya a port of saferty or a state with which to make deals.

The MEDU group, that works in centres in the province of Ragusa (with a presence in the Pozzallo Hotspot) as well as the CARA* at Mineo, has treated more than 450 people over the past four years, providing psychological and psychiatric support. More than 80% of those treated have reported serious physical and mental condition, caused by their permanence within the Libyan camps. The witness accounts of the horrors perpetrated on the other side of the sea, taken from clinical casework, help to make the public understand the reality of that which is taking place in Libya, through recounting stories from personal lives.

Giuseppe Cannella, psychiatrist for the On.To project, tells of the inhumane conditions in the Libyan prisons, where migrants are detained as long as three years before being abandoned to their fate at sea. Forced to defecate in boxes, just like litter trays for cats; forced to be violent against other detainees and themselves submitted to torture, even killed; daily beatings with iron bars, rope, electric wires; psychologically and sexually abused, and this is not only the fate of women (all of whom are systematically violated) but also men.

Nine out of ten people presented symptoms of post-traumatic stress and needed to be treated for long periods of time, which do not, however, coincide with the timings of Italian bureaucracy, which displaces and expels people without considering whether treatment has been concluded. Expulsions and rejections also return people to the conditions of their torturing from which they had miraculously escaped, as Anna Dessi recalls, psychologist and psychotherapist for the association, who underlines the call launched in the press release: “Libya is not a port of safety”.

Valentina Gulino recounted her experience as a psychotherapist in the Pozzallo Hotspot where, in a state of total uncertainty, 73 migrants who disembarked on July 15th still live. The Hotspot, she claims, is not an appropriate place for these people to be kept for a prolonged period of time. Their presence at Pozzallo simply continues that spent in the Libyan prisons, not only due to episodes of violence but also due to the militarisation of the centre and their forced confinement there. The uniforms cause fear and return people to their memories, as Samuele Cavallone recounts, the association’s coordinator. He spoke of how not unsimilar scenes takes place at the CARA in Mineo, where migrants in clear need of help do not approach them because they are surrounded by men in uniforms.

One representative story is that of one of the migrants detained in the Pozzallo Hotspot, 13 years old at the moment of departure, who arrived in Italy having turned 18, after having seen the death of his entire family. After his period in the Libyan prisons and having seen at least another 30 people die, experience added to by torture and sexual and psychological violence, he has now spent almost three months in reclusion, isolated and surrounded by soldiers. This is an experience that expands outwards, confusing itself with previous ones, the memories of years of degrading treatment, triggering a process of secondary re-traumatisation that increases the patient’s psychological vulnerability. This is why one of the demands made by MEDU is for the immediate transferal of these migrants to host countries or at least to structures more appropriate for their situation.

And yet institutional bodies and the territorial commission seem to be deaf faced with the medical needs of many migrants (above all women migrants). And this is even true when there are very clear signs of vulnerability, as with the Diciotti – the Italian Coast Guard vessel blocked at the port of Catania – when the MEDU team was blocked from accessing the vessel. Furthermore, until a few months ago the Territorial Commissions accepted medical certificates deposited by associations in order to establish the necessity for permanence in Italy due to medical reasons connected to psychological vulnerability. Now however certification is requested of public bodies which do not only lack a holistic clinical vision of the patients treated by MEDU and other associations up till now, but also lack cultural mediators necessary for a patient-doctor relation.

Furthermore, MEDU emphasis that, since the new government came to power, rejections have exponentially increased, including for those who have provided public or private medical certificates, in the light of the Summer circulars from the Interior Ministry and in view of the changes in the “Immigration and Security” law (signed the other day by the President of the Republic, ed.). This decree not only extends detention times in detention centres* and weakens the hostel system, but also foresees the elimination of humanitarian protection, substituted with a kind of special permit that comprises medical reasons or, as the text of the law reads, “health conditions of exceptional severity.”

Without doubt the cases collected by MEDU contain the criteria for these extraordinary conditions. Unfortunately the Territorial Commissions do not share the same conception of “severity” in relation to migrants who have passed through the Libyan concentration camps. In this way not only will the illegality of migration be increased, but psychological violence and lack of assistance will continue to be meted out on subjects of high vulnerability.

Solidarity Is Not A Crime: Six Tunisian Fishermen Return To Freedom