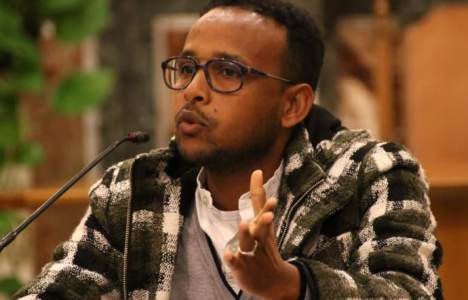 Taken from lasicilia.it – An open letter penned by the writer Mogamed Abdelfetah to the Vice-Prime Minister and Minister of the Interior: ”I no longer feel safe in this country, a country I love and had thought to now be my second homeland.”

Dear Minister Salvini, I have lived in exile for seventeen years. I have seen many strong and charismatic speeches. These are given by men who only have one thing in common> they were all corrupt and cruel leaders, each of them for at least 30 years. One of the most famous speeches I heard was by Gheddafi. When I heard it, I was about 200m away from him and I listened with my mouth open as this extravagant dictator threatened the rebels: ”We will clean the streets house by house, road by road, neighbourhood by neighbourhood.”

Dear Minister, you were elected by stoking fears of the weakest. Today even I am scared. I know longer feel safe walking down the street or talking with people. I feel heatred at the bus stop and in the council officers, even in the police stations where we go every day.

The newspapers tell us — and history reminds us — that the most famous decrees in this country have been the kind that stoke hatred towards the Other: from Mussolini’s decree of October 15th, to the Bossi-Fini decree that criminalises people’s presence simply for setting foot on Italian soil, to the Minniti decree that finally led to a deal with Libya. And now we have the Insecurity decree, that removes Security from us. This kind of law has always left a great wound on humanity.

Dear Minister, I do not believe that you have been objective in your actions towards us, that is, in how you have dealt with the issue of immigration. We feel instrumentalised by your politics, one designed to enter into office democratically. What scares me is that you are trying to tell us, to teach us that democracy can lead to this result. I do not agree.

I have always thought that democracy leads rather down a road that takes us to peace and security, to co-existence and the common good.

Dear Minister, thanks to a politics of rejection and push-back, I have lost two closed friends in libya in recent months, and many women have given birth and died, leaving their children on the beach. Today I no longer feel safe. I want to leave an Italy that I had thought to have been my second homeland,. I do not want to remain in a country that does not believe in its own values and institutions. I am here precisely because the very same does not exist in my own country either.

On the day that you go to Brussels to ask a change to the Dublin Regulation, you know very well that thousands of people — perhaps including myself — will leave Italy and go and join the thousands of our countryfolk and immigrants (inc;uding many Italians) who live in Germany, Holland, Sweden and Belgium, as so many of the people who arrive in your country want to. So, Dear Minister, instread of raising your voice against the meek, against immigrants, against refugees, against women and children, try and solve our proble, our histories, our destiny, bound as we are to a rotten law to which this country’s politics have simply agreed. And you will see, Dear Minister Salvini, that in this way you will do a great favour to the thousands of farmhands, refugees, young women — often little more than girls — who are being exploited, abused and humiliated. People used by someone for political propaganda, a politics that seem truly intolerable in a country such as this one. A country I love.

Not Only At Sea

1100 migrants arrive in Catania, but where will they stay?