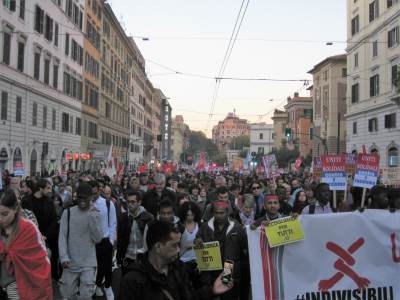 On November 7th the Senate approved the “immigration and security” decree, voted through as a fundamental part of the government’s mandate – the usual parliamentary instrument of blackmail, used by every government to remove any form of internal opposition. Furthermore, the text voted on is different from the one which had already passed the first stage, inasmuch as the government itself added a swathe of amendments that worsen the decree in terms of the right to international protection.

The demonstration called for November 10th in Rome thus has the bitter taste of the final saloon before the law passes through the final vote next week, a moment to demonstrate that an important part of the population is against the transformation of the decree into a law that will rip apart the little good that had been constructed within the reception system over recent years, and will fundamentally bear down on the rights guaranteed by our Constitution. Perhaps it is precisely this final moment in the Senate that brought so many people onto the streets, numbers not imagined by the organisers themselves, who told us that when they arrived at the front of the demonstration at Piazza San Giovanni, the end was still at Termini station, around 2km away, meaning that the demo might have contained as many as 100,000 people.

More than 450 organisations adhered to the demonstration. Trade unions, associations, political movements, NGOs, social centres, parties, individuals and above all hundreds of migrants poured through the streets of Rome,, with the slogan that the organisations had chosen for the demo – “different but inseparable” – demonstrating that solidarity and the spirit of welcoming still exist in Italy.

The numbers scare the government, which is doing everything it can do avoid any sign of retreat and in fact deployed an entirely exaggerated number of police, putting up road blocks at every motorway check point in order to slow down the arrival of the coaches full of protesters, even ordering thorough checks, the video-recording of passengers and stop-and-searches. Attempts to stop or reduce the number of demonstrators miserably failed, obtaining simply a delay in the departure of the demo.

One of the protesters was the Mayor of Riace, Mimmo Lucano, who remains banned from the town. He stood at the front of the demo behind the opening banner, the same that led the demonstration in Riace on October 6th, when he was under house arrest. There were many chants and slogans in his honour, who emotionally thanks the many people present and above all those Italians who have shown themselves not indifferent to the destiny of foreign citizens.

In his closing speech, Lucano reminded as that we cannot have justice without equality and an ideology of welcoming is how to struggle against the mafia and support the grassroots. Unfortunately, ‘welcoming’ has too often become a business for criminal organisations, when it could instead be a cultural and economic stimulus for areas suffering depression and depopulation, as Riace was before opening the SPRAR centres and a decentralised reception system. The new law goes in the opposite direction however: the limitation of humanitarian protection, the reduction of the SPRAR system, the expansion of emergency hostels, the elimination of the guarantee of language course in such centres [according to a separate Ministerial document] and the lengthening of times spent in detention centres. All of this will simply lead to the creation of insecurity, for migrants and everyone else, with an exponential increase in the number of irregular persons and the elimination of every possibility of cultural integration or secure work. This is a law that seems to have been designed in order to increase the speculative business of reception centres and to force thousands of people to accept inhumane working conditions in the labour market, simply in order to survive. But Salvini continues all the same, commenting on the demonstration with the usual tweet that “the golden days are over”, even if it isn’t quite clear for whom the good times have ended.

One small depressing note from the demonstration: the near total absence of the Italian TV press. Hundred of journalists – from the international media – recorded the event, even surrounding Mimmo Lucano, who found himself needing to be escorted away to protect his privacy. Yet the majority of national stations were silent about the day, giving far more attention to the demonstration in Turin in support of the high-speed rail link (“Si TAV”) despite the fact that only a tenth of the people were present there, in comparison with the demo in Rome. Clearly the official opposition to the government represented in the Italian press only turns to a minority – the Italian industrial bourgeoisie – and not to ordinary, precious and exploited citizens (migrants or otherwise) who represent the vast majority of this country.

From Pozzallo to Mineo via Ventimiglia. Migrants detained, deported and isolated.

For A Different World: No More Deaths in the Mediterranean Sea!