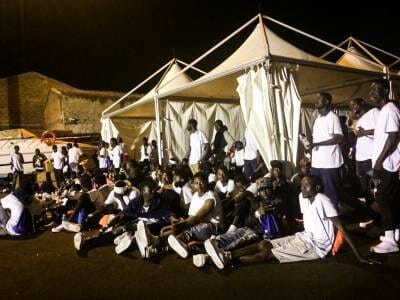 Last week was characterised by a small upturn in landings, with numbers that we haven’t seen for some time. The political situation in Libya and the instability of the regions in the global South – aside from the countless wars we are waging – are simply some of the causes that have seen more than 2,500 people land on our coasts between Friday and Sunday. People who we continue who we fail to recognise as people, who we treat as numbers, so that we can keep murdering, mutilating, violating, rejecting and not accepting them. A recognised right, according to the law, which we have completely sold off.

Italy has sold off hundreds of thousands of human beings to the Libyan militias in order for them to not arrive in Europe. This task is entrusted to them, and any means is given the go ahead. These security policies have allowed the European right-wing – xenophobic to varying degrees – to win a host of elections, who continue to consider people as counting beans.

All of the Ngos in Libya – from the more “institutional” to the more critical – share an idea that is fundamental for our analysis: that there is no government in Libya, that we cannot trust the Libyan Coast Guard, and that human traffickers are collaborating with the world of politics.

All of this is consistently re-enforced by those landing in Italy, those who have had the strength to survive despite the cruelties, violence and violations they had suffered.

These are the bodies of exiles, increasingly akin to the bodies of the interns of Auschwitz, as an operator from one of the recent landings claims: “I have never seen anything like it. The further it goes on, the worse it gets – the torture in Libya is always criueler and people arrive with a range of mutilations. Many suffer from acute malnutrition, some nationalities in particular, and even in this state people are left on the quay of the port or onboard the ships because we are simply unable to welcome people, may God help us.”

Anger simply increases with the awareness that in everyone’s imagination immigration is now simply a story for politicians to tell with arrogance in their continuous search for a scapegoat for all seasons. And even more tragic is the fact that we are unable to oppose even this.

The deaths returned to the newspapers this weekend: someone spoke about them in a small column, but no one wrote about the stories of those who disappear every day, of the lives lost at sea without name, those who have passed over in silence, in pain, unheard. The dead sold for a few votes, the dead children of nobody.

For those who arrive, the reception system continues to be organised as an emergency. At the landing at Trapani, the Tunisans who were brought to the quay immediately had their hand tied together (the police find it important to emphasise that they were not handcuffed, and that this practice is to guarantee their cooperation); once they had been immobilised, they were escorted to the Hotspot by two police officers. If you’re Tunisian, you’re treated as a criminal, and there are no humanitarian organisations present to critically report such practices.

The landing at Augusta lasted three days. Women, children and others were left under the sun without any possibility to take a shower before being put on the buses towards the North of Italy. Again, the humanitarian organisations present could report these illegal and inhumane practices, but they turn their eyes elsewhere or they speak about the impossibility of opposing such practices.

In the off-limit areas of the hotspot on Lampedusa and at Pozzallo, the watchwords are ‘order and security’.

In Messina the plan for distinguishing the unaccompanied foreign minors from adults has never functioned, and so instead of being put in specialist* centres for minors (which are open again in Sicily and other regions in the country), a section are being put in the initial reception centres for minors in the province of Messina after having slept at the CPSA* (which now functions as a Hotspot) along with the adults.

In Palermo there was a landing, after around six months, yet we were not able to organise the landing area in a decent manner. After the rejection of the plan for a Hotspot, it almost seems a provocation to receive these 250 people in so uncivil a manner that they were left for a night on the ground at the port. Others remain on the ground in the police station while waiting the identification procedures, to then be put on coaches for Extraordinary Reception Centres* in the North of Italy. They remained in the same clothes, unable to wash themselves, continuing to be treated a mere numbers, even to the extent that each nationality now has an identification code. The Hotspot system selects migrants on the basis of their nationality and for many access to legal protection is simply a mirage. We read what happened in Palermo as a provocation: “You don’t want a Hotspot? Fine, then don’t complain when we leave people like this, you’re the cause of this inhumane treatment!”

There is a large number of evictions from the hostels, around 50 every week, while the army of invisible, desperate people exponentially expands, increasing the black market for residence documents in order to renew permit to stay. People leave the centres, losing their right to a place in the hostels and much more – becoming invisible even in death, in the countryside or in the mountains between France and Italy, where bodies buried under the snow are slowly becoming visible as the weather warms. But it’s better not to speak about such things for now, it would upset our politicians’ plans, who need to collect the next round of votes.

29-Jähriger stirbt in der Unterkunft Umberto I in Syrakus

Deaths at the Border. Control and Repression Replacing Reception

Fool’s Gold: A Night-Time Landing in Palermo, Migrants Left Out in the Rain

Deaths, Rejections and Vulnerable Detentions in the Pozzallo Hotspot: The Daily Tragedy of Those Fleeing to Europe