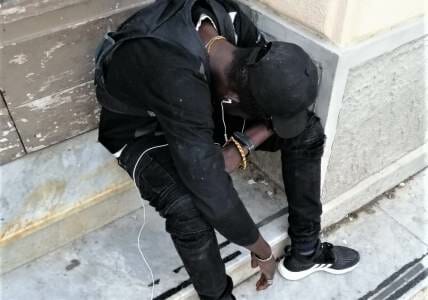 “You can’t live without water in 2018, it’s shameful. Even in Africa they have water every day. We’re a third world country, you can’t but feel ashamed”. And it goes on: “The bathrooms are filthy, we can’t even brush our teeth”, “even though there’s been heavy rainfall in the past days, we haven’t been able to distribute water to everyone, as we should be able to”, and obviously one cannot miss out on the “it’s the blacks fault, they’ve used up all the water, I’d like to know how it is that in their places they’ve always got water.”

Let’s start from here, from the comments of those in line at the water fountain in Palermo, a fountain laid siege to after the city faced some problems due to the strong rain in recent days, rain bringing death and disaster. We forget the dead so easily, we’re only concerned with our own backyard, and to lay the blame on someone, just like those politicians who throw the blame down on foreigners for everything bad that happens in Italy, making us feel tricked, abused, caught in the cross-hairs.

The political climate we’re living in is entirely detached from reality, created by monsters, by people who feel authorised to bellow words of hatred and the consequence is a rise in the number of violent attacks on migrants.

Aside from such abuse, the political climate is distinguished by the unconstitutional laws that are producing increasingly invisible, exploitable subjects, systematically stamping out people’s rights. Illegal practices are born from and multiply within such a climate, from prefectures and police stations that feel they are being given cover by the government.

And in this period of waiting on the fate (already written nevertheless) of the security law, many police stations have already blocked everything, awaiting indications from the Ministry, while many managing bodies are speculating on the confusion, spreading panic.
It’s not rare to hear an asylum seeker says: “they told me that the Minister doesn’t want us and won’t give us any kind of document so it’s better to leave, before they come and take us and send us back, that’s why I ran away.”
The need for psychologists is growing in the centres because anxiety and depression is only increasing among people who have already been severely tried and abused.

Incivility, prejudice and inhumanity are the words that migrants feel upon them.
The incivility in our country can be seen through the note sent by the manager of the central SPRAR* service on October 25th, that underlined how that in accordance with the application of the 113/18 decree, the central service can no longer proceed with the placements of asylum seekers or holders of humanitarian protection, even if they are considered vulnerable persons.

What kind of country are we becoming?
A country that does not only stop people who are fleeing from arriving here, and lets them die in the desert, the Libyan camps and at sea, but one that forced young people to flee from this country, those who have no possibilities of growing here. 114,000 Italians left for abroad in 2017, in comparison with 26,000 arrivals – an Italy that is increasingly fearful, old and decaying.
And the country’s incivility can also be seen through the lack of respect for the dead, as we saw some days ago at the Rotoli Cemetry in Palermo, where lot n. 220 (where the migrants who died in shipwrecks are buried) seems like a potato field rather than a burial site. But never mind, they’re the unnamed dead!

Those who do manage to arrive here (to the silence of the media) are held at Lampedusa in a centre with no clear juridical status, to then be taken to Porto Empedocle and from there to the detention centre* at Milo or other sites of detention and confinement. Few, very few people are taken to the Extraordinary Reception Centres, meaning that the number of residents in the hostels is decreasing across all the Sicilian provinces.

The other day we met Lamin (not his real name=, one of the young men who has fallen victim to racist Italian politics: he has a permit for humanitarian reasons in his hand but no response for months about a place in a SPRAR* centre. As in so many situations, the only option is the street – without a point of reference, without any money, with only a phone to stay in touch with his mum – though this too was taken from him, stolen by some upstanding citizen while sleeping rough.
Lamin is one of many abused by the system, a victim of the honourful silence kept by a society that no longer has the strength or courage to rebel against the pillaging of an inhumane politics, a society that think only about creating privileges for the few and hatred and poverty for the many.
“Now you’ve really taken everything from me, my life doesn’t have any meaning any more, what did I do so wrong?”— the last words Lamin says before silence and tears of desperation.

Free the Open Arms and the Iuventa: No One Should Be Sent Back to the Libyan Inferno

Lampedusa, drifting dinghy with 107 people aboard rescued during the night

The refugee reception centres in the Madonie (Palermo) – part 2

They are being taken for a ride – Part 2

The end doesn’t justify the means

The Mare Jonio arrives in Palermo