The barbarism which befalls the vast majority of migrants, people simply searching a dignified life, leaves deep and indelible wounds on their psyches, exacerbated by the violence which the Italian reception system so often inflicts upon them as well. Every day, people tell us about their tragic experiences in Libya, in the desert, on the crossing, all moments in which so many people lose someone along the way. These are journeys in which death is always present, burrowing deep down into these people’s souls.

All of this physical and psychological violence is entirely undervalued by Italy. In the Extraordinary Reception Centres (CAS*) and the centres run by the central service (SPRAR*), there are only psychologists for a few hours a week, and do not always manage to take responsibility for those who have need of them, due to the lack of mediators and the consequent lack of trust. Often there are not even any professionals working in the centres.

This failure, together with other factors, means that migrants are increasingly abandoned to their fate, which is frequently the street. We continue to see how this is all simply for the profit of speculators, thanks to policies which facilitate crooked dealings in the name of a false security: a flow of millions of Euros which simply helps out big corporations. States invest in security, while the multinationals which produce weapons and other instruments to protect the borders see their profits hurtle upwards, and the race to the bottom simply increase the number of deaths, and not only at sea.

Last week, more than 160 people died off the coast of Libya, people who died due to policies chosen by a Europe and an Italy which, entirely through their own pronouncements, have cancelled out any respect for human rights. There are so many deaths that the sea brings them back to the shore, as a sign of a limit which it reached long ago.

Recently the mother of a young Eritrean man contacted us, whose son very likely died in the massacre of January 16th, one of the many massacres which are no longer mentioned on the evening news, but which instead simply become statistics for the humanitarian organisations that count the dead.

The women asked us for any information about how she might bury her son, speaking of him as already dead:

“My son was called R., he was Eritrean, 27 years old. He was in Libya for 16 months. I didn’t have much money, and his father died from an illness many years ago. R and I decided to get out of Eritrea, we couldn’t live like that any longer, that’s not life. Despite my age, I decided to leave my own country because my son didn’t want to leave me there. So we set out on the journey, along with terrible people who took everything from us, along with the collaboration of the different police forces we met in the desert and at the borders. Everything we had saved up ended after a short while, and my son immediately began to work, telling me “Mum, you have to go to your brother as soon as possible, you can’t stay in this hell.” So R worked as a slave in Libya, and put me on a boat. That was the last time I saw his face, happy and proud to have done something for his mother. Instead, I just live in a state of anguish because R is dead. I cannot hold him again, I cannot even stroke him, they have taken this final wish away from me. R called me on January 14th telling me: “Mum, we’re going to be together again soon, we’ll hug again. Tell uncle to make up a bed for me, because I’ve been sleeping on the ground for so long, and I don’t want to do that in Europe.” His last words were: “They’ve put us on the boat with a gun point at our heads, the sea isn’t good, but they say we have to go. As soon as I get to Italy I’ll call you, bye Mum.” This was, unfortunately, the last time that I heard from R, because on January 17th another Eritrean boy, a friend of R’s, called me to say that during the crossing a huge number of people had died, and that only four corpses had been recovered. There has been no more news about R, I think he must be dead. But I want to embrace my son for a last time, I want to thank him for having saved my life. I’m alive and I have to continue living because of this huge gift he gave me, I want to see his body, tormented by so much violence, I want to take care of his wounds because giving him a decent burial. Can you please help me in any way?”

The only response we have been able to give is silence. A lump in the throat has stopped us from going further. We had to hold back the tears, the anger, the dejection, as we do every time we hear an account like L’s. We are in touch with the organisation in Trapani, from whom we wait to hear when they will bury the four bodies which were recovered. L. would like to come and lay a flower on the grave of one of these four young people, to whom she feels as close as to her own son, the only consolation left to a mother from whom we have taken everything.

Miss, I’m Sorry, But I Have To Inform You That Your Son Has Been Killed

So much hypocrisy and confusion, only one certainty: death – Palermo

Died at age 15 on a ship of Doctors Without Borders, “Beaten up in Libya and left without water and food for days”

Recovered or Saved? Criminalisation of the Sea Missions and Still More Slaughter At Sea 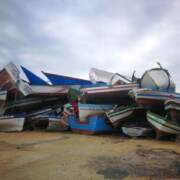 Women and migration between active remembrance and solidarity

The Dead No One Notices

Mediterranean tragedy, the last call before the silence: “Help, we are 600 and the engine room is full of water”