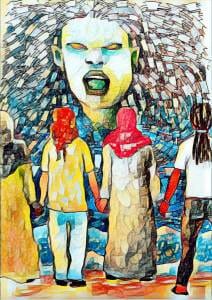 Tunisian women – mothers, sisters and daughters of young migrants who have died or disappeared trying to cross the Mediterranean Sea – constantly struggle to see the truth and justice against the crimes happening over and over along the European border, killing and denying lives, stories and rights.

Together, they challenge the border’s gaze and denounce – with their voice and their actions – the historical removal of these responsibilities: women are the custodians of a living memory that is opposed to the murderer frontier. They are custodians of a claiming memory that resists the reduction of these people to faceless numbers, disappeared in political and social indifference.

Precisely to reclaim the value of these lives and to denounce the murderous policies, Tunisian mothers have created the Couverture de la Mémoire – Blanket of Memory (Coperta della Memoria) from Tunisia, starting from the Coperta di Yusuf, originated in Lampedusa after the drowning of the baby. Yusuf, yet another victim of the border.

With the blanket, memory is built by intertwining the individual stories of the missing sons, daughters, brothers and sisters: yarn in hand, weft and warp, each “piece” that makes up the blanket represents the story of a person lost along the migration route. Each “piece” recalls a person who is still looked for and for whom truth and justice are asked. In this way the blanket of mothers makes the story a means against the violence of the border and makes memory an instrument of collective struggle.

At the beginning of next October, on the anniversary of the tragedy of 3 October 2013, the Forum Lampedusa Solidale will organize in Lampedusa an event for the joining of the blankets of memory that were born in the Mediterranean – from Lampedusa to Tunisia, from Val Susa to Bergamo to the Plain of Gioia Tauro.

The Tunisian mothers, invited to participate and to testify their struggle, will cross the border and arrive in Sicily and Lampedusa. In Lampedusa to tell and testify – through the Blanket and the stories it collects – their memory of what is happening on both sides of the Mediterranean. In Sicily to carry out the search and identification of the bodies of missing children, meet the lawyers and continue to report crimes through memory.

Through this fundraising, we want to support the expenses for the stay of mothers in Italy, to make it possible for women to travel and stay in Lampedusa and Sicily, in the places of disappearance, the reporting offices and the cemeteries where their loved ones are buried.

We therefore ask for solidarity donations to support this initiative. To support the caravan of mothers and their memory, alive and demanding, which will cross the sea. To consolidate bridges of solidarity in the Mediterranean that resists indifference. To join us in a struggle for the rights of migrants which is not only of the mothers, but concerns us all.

The Border Returns to Lampedusa

Messina: A Mega Tent-City for Migrants in the Old ‘Gasparro’ Barracks. The €1,932,000 Contract Already Announced in the Official Gazette. And that’s not all…

Palermo, march in memory of the Mediterranean victims