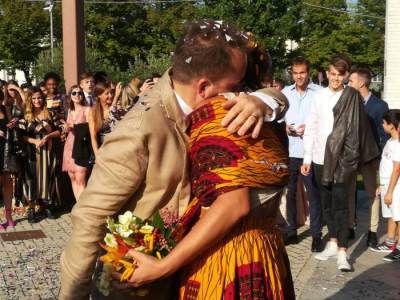 Chiara and Stefano come from different realities. He comes from the world of scouts, youth camps spent with a guitar in his hands. She is an activist, always present to demonstrations singing slogans and choirs. But there is one difference that doesn’t draw people away: they are both driven by a sense of solidarity towards the other, typical of both their worlds, which has made them meet and fall in love with each other.
They tell us their story during a hot summer morning in Palermo, saying that, despite the existential precariousness that persecutes the younger generations, they have decided to take the big step, to get married. But they don’t want to make their marriage a private event, or to share their joy only with friends and family, on the contrary they want their act to serve something bigger, something that could help others. Therefore, they have decided to donate part of their wedding gifts to an association that takes care of the most vulnerable people, the unseen, those who are often left behind.

So, they came to know Borderline Sicilia: by reading our website, seeing the results we have obtained, they have decided to bet on our little Sicilian reality that for years has been fighting for the respect of human rights and an adequate reception.

We were moved by their empathy and their intentions and flattered that two young people from Emilia Romagna had come all the way to Sicily to meet us, thank us and give us this gift.

We decided to go to Carpi, to the parish that would soon declare them husband and wife, to tell the local population about what is happening in Sicily and our difficult battles.

Unfortunately, as it often happens, the initiative and the intentions of Chiara and Stefano have been exploited by speculations typical of newspapers and media that try to sell with the usual propaganda arguments. One article in particular, which appeared in the ‘Gazzetta di Modena’, reported the information in a misleading way, asserting that a young couple had decided to give the money of their marriage to migrants. And immediately the jackals of the social networks unleashed the most brutal and typical insults of this xenophobic climate that now excels in Italy.

But solidarity is not defeated. The Facebook group #iosonoqui (I am here) has intervened starting to storm the post with positive and solidarity messages, making the comments of hatred disappear among the thousands of messages.

In the meantime, the big day is approaching. We travel away towards Emilia where a parish full of people is waiting for us, listen to us and truly understand what is going on on the island, beyond the slogans and the propaganda – the portrait of an Italy that resists and doesn’t let its mind be fooled by false information and lies. The marriage also presents itself as a celebration of differences that unite us. A party of African colours that are reunited with the classic ones of the Catholic religion. A mixed ritual which brings together music of distant origin with the most typical ones. A choice of readings and gestures that surprise for their originality but also represent the purest nucleus of the evangelic teachings.

We must thank Stefano and Chiara, not only for the gift, that will surely help us in our daily battles, but also for the spirit with which they welcomed us and for showing us that there can be communion even in diversity. Our gratitude goes also to the little Blue, who has chosen to celebrate his birthday by donating to our association what was intended for his gifts, involving in a gesture of solidarity his young friends and their families.

Translation from Italian by Francesca Cavallo

Migrants‘ assistance workers without being paid for months. Palazzotto (Sel): “But Sol. Calatino has received the funds”.

They were called the Lampedusans. They are still expecting

AN ATTACK ON FUNDAMENTAL RIGHTS