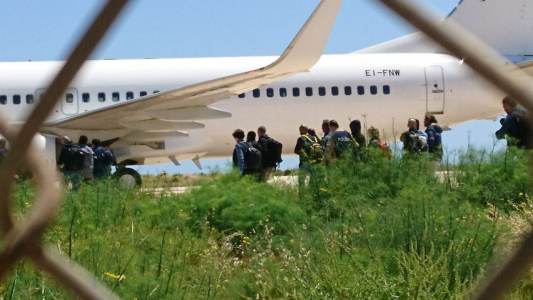 The Minniti-Orlando decree, now law, came into force in a deeply concerning way the past few days, with raids across Italy, rejection notices from the police stations and deportations from the Hotspots. The style is fascist, even if the law was signed off by two politicians who, in theory, ought to be fighting fascism. This government’s actions are nourishing a daily xenophobia and violence against migrants which increases by the day, just as the glaring security measures close in while the government gives the nod.

We are witnessing the violent repression of every kind of dissent, the inert in the face of those spreading racism and hatred. There is something in all this which I cannot fathom, and it scares me when I think of my children, of the children growing up in a Europe where fascism is returning with such power.

It is in this context of deep concern that the deportations are passing by unobserved, which have been carried out at a punctual rate, at least once a month, from Lampedusa. The other day a charter flight from the company Meridiana brought 40 Nigerians to Palermo or Catania, to then be taken to Rome, with Lagos as their final destination. It seems that two of them were then brought back and transferred to Villa Sikania, perhaps because there were not enough places on the plane. Thus there will have been 38 people who, on their return, will remain excluded from Nigerian society because they abandoned their own country, who will be rejected by their family who do not want to have anything more to do with someone who had made them send money, and who apart from that might risk finishing in prison.

People have often told us that they would prefer to die than eventually go back: at least they would be remembered among those who tried everything to find a better future for themselves and their loved ones. We wonder whether these people had information about international protection, and contact with the safeguarding organisations within the Hotspot. We wonder whether these operations are illegitimate in the eyes of the UNHCR and IOM. It seems evidently clear that these represent collective deportations of potential asylum seekers, handcuffed and escorted by police officers as if they were criminals – all of which is in clear violation of international laws and conventions which Italy is obliged to respect.

By now it is normal practice that once a month there is a deportation of Nigerians from Lampedusa, while deportations of Tunisians from Palermo are ever more frequent. The notification of rejection orders to Gambians is also ever more common. The Italian government is engaging itself in the search of new deals with African states, irrespective of whether they are dictatorial, corrupt and deprived of respect for people’s rights.

Lampedusa is an island of reception, exchange, of meeting – but for Europe it has to be only an insuperable border, where people’s dreams are smashed on the rocks. You won’t read the news about the 40 deported Nigerians in any newspaper. No TV program will talk about the underhand and constant elimination of people through the violation of their human rights.

The 40 Nigerians on Lampedusa, along with the others swept up in raids throughout Italy, will join the long list of invisible people we are creating simply to aid the racist propaganda based on nothing else than fear and manufactured insecurities.

This is the best method of cultivating hatred and division, a weapon utilised by governments to create social chaos. For this reason, I’m starting to be scared for my children.