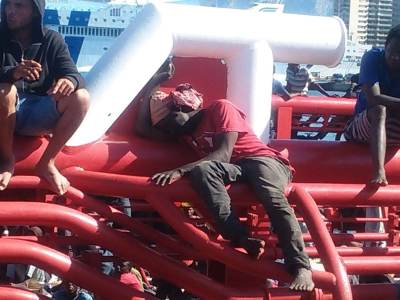 Borderline Sicilia is backing the call-out launched by antiracist groups in Catania against the proposed landing of the C-Star in the port of Catania. The ship has been hired froman British mercenary company by the far-right organisation ‘Generazione Identitaria” , as Andrea Palladino reported in Famiglia Cristiana yesterday.
The racist, xenophobic group’s aim is to carry out paramilitary actions in the Mediterranean in order to push back migrants attempting the crossing, escaping war, misery and the Libyan hell. They aim to intercept the NGO sea rescue operations, themselves the object of a fierce smear campaign over recent months.

To the Minister of Infrastucture and Transport

To the President of the Sicilian Regional Parliament

To the Prefect of Catania

To the Catania Chief of Police

To the President of the Catania Port Authority

To the Commander of the Captainry of the Port of Catania

To the Mayor of Catania

As reported by the press, the C-Star – 40m length, constructed in 1975, waving the flag of Gibuti – is expected to dock in at the port of Catania around Tuesday 18 July 2017. The vessel has been hired by the group Generazione Identitaria, racist and xenophobic by definition, in order to pushback migrants attempting the Mediterranean crossing, via paramilitary activities, and to intercept the invaluable rescue missions effected by the humanitarian NGO sea missions, ones which are increasingly criminalised.

The stopover in the Port of Catania and other Sicilian ports is mean to allow the ship to take on provisions for its “mission” and to allow volunteers” to embark, that is, those enrolled in its paramilitary operation.

The signing associations request that the authorities addressed do not allow the C-Star, currently staffed by the Generzione Identitaria the use of port infrastructure and to contact the relevant authorities. In our view it would be a serious and worrying sign to allow the use of public infrastructure to organisations intent on paramilitary activities in the Mediterranean Sea, intercepting migrant vessels and presuming the right to intervene by cosigning survivors of shipwrecks to the Libyan Coast Guard, thereby violating the legal obligation to accompany them to the nearest port of safety, which is certainly no Libyan port.

Furthermore, we are concerned that the presence of a ship which does not coordinate with the Italian Coast Guard might hinder rescue missions, putting shipwreck survivors at risk, as well as those working at sea. This is a racist operation, nourished by slanderous propaganda, which we cannot support with any form of logistical support or institutional silence.

The following associations communicate that on Tuesday 18 July they will be keeping watch at the Port of Catania aspart of an anti-racist and anti-fascist campaign.

A Young African Harassed and Followed in Via Etnea, Catania

Migrants died below the deck, those bodies we want to ignore