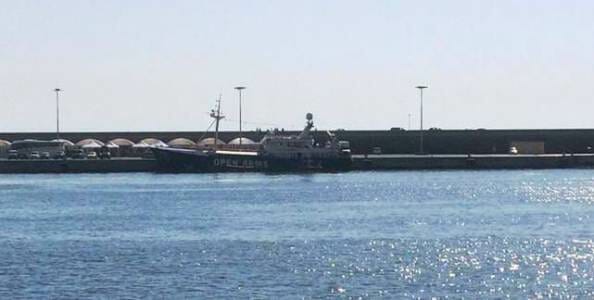 The Golfo Azzurro, the vessel belonging to the NGO Proactiva, arrived at the port of Catania on Thursday morning with 490 migrants on board, including a group who had survived a shipwreck. At least eight people died, the bodies of whom were transferred to the Vos Hestia (Save the Chidren) although there are strong suspicions that many other bodies have disappeared, swallowed up all too quickly by the sea.

In the moments of recovering the bodies and arrival at port, it is extremely complicated to reconstruct the dynamics of the events and manage to provide names and faces to those who have not survived, above all when none of this is particularly facilitated by the landing operations.

At the cordoned-off quay at Catania there was a group of journalists, and the attention seemed to be more focussed on the seizure of the ship belonging to the German NGO Jugend Rettetlast Wednesday, rather than on what has happening at the port.

We know that over the course of yesterday, August 6th, the Libyan Coast Guard pushed back 137 refugees, intercepting them around 40km north of Tripoli, and sending them back to those detention centres already tragically known for the abuses carried out inside.

Some manage, after months inside and at a high price, to flee from such horrors. Italy has decided to actively collaorate with those who send men, women and children back to this living hell.

Last week saw the proposal of a Code of Conduct by the Italian government for the NGOs operating in the Central Mediterranean Sea. Eleven points that, in essence, attept to reduce the activity of seach and rescue at sea, transforming them into simply surveillance and assistance for those carried out by military vessels, imposing the the presence of military personnel on board. This is an extremely serious step, one which gives a green light to the total militarisation of rescue operations, recognising the asbolute priority of investigations even during the search and rescue opperations. Talk of “humanitarian” activity truly no longer makes any sense, when those who are fleeing from Libyan prisons and manage to avoid being sent back to the inferno they have only just left then fin themselves on ships with machine guns pointed at them yet again.

We know all too well what awaits migrants in Italy, from the moment of the landing onwards: a long road of obstacles in which every refugee must first show that they are not a criminal and where every right to protection must be won in the field. From now onwards all of this will probably begin on board the ship managed by organisations that have signed the Code of Conduct: Save the Children, MOAS and Proactive Open Arms being among the first to do so. Those who have disassociated themselves from it might find great difficulties in carrying out their missions, emersed as they are in a climate of repression and criminalisation which seems only to be getting worse.

The episode of the Jugend Rettet and the accusations which have been made demonstrate just how strong the will and, unfortunately, ability is of those who want to put an end to exclusively humanitarian activity in search and rescue, when in reality it is Fortress Europe’s policies of closure that are truly criminal. Those who have no alternative will continue to flee, and the militarisation of the Mediterranean can only bring further episodes of violence and death.

The migrants who arrived in Catania on Thursday found the usual ranks of armed forces and Frontex agents awaiting them, as well as staff from humanitarian organisations who, in this organisational system, have less and less room to manouvre. “When we arrived them asked me lots of questions about my country, the city I was born in, the countries around it”, a Sudanese man told us a few days ago, who landed in Catania last month. We too are witnees to the fact that Frontex’s nationality screening operations are effected without any safeguards of protection and that decisions are made according to arbitrary and discretionary criteria, which result in mass rejections and expulsions. The moment of arrivals, after days at sea in extreme conditions, is one in which migrants’ futures are played with, rather than a moment in which they can, above all, be listen to and assisted.

When the Golfo Azzurro landed, the authorities even blocked the team from Doctors Without Borders (MSF) from entering the port, who had arrived to provide psychological support to the survivors of the shipwreck and their fellow travellers. This was an extremely serious step which clearly demonstrates the institutions’ direction: hindering the work of protection and cure by increasing the space and energies dedicated to procedures for controls, (often forced) identification, and arbitrary selection between those who have “won” the right to stay in Italy, and those who have not.

The inhumanity of government policies does not spare any migrant, neither those who drown nor those who sruvive, whether men, women or children. Thursday in Catania also saw the arrival of new orphans of the extended and daily war that Europe has declared against refugees, including a two year old girl.

Still more dead to be added to the list of 1,800 people who have died at sea this year alon. Their bodies arrived on Friday morning at the port of Augusta, on board Save the Children’s Vos Hestia, along with other Eritrean, Syrian, Libyan, Lebanese, Egyptian and Palestinian citizens. New victims but also new people who will need to find the strength to demand those rights which so many want to deny.

Those Who Die, Those Who Arrive and Those Who Remain: The Overcrowded Hotspots at Pozzallo

No One Is Meant To Know

Migrants died below the deck, those bodies we want to ignore

“They Leave As People, They Arrive As Ghosts” Shipwrecks And Push-Backs At Sea. Italy Closes The Doors, Including To Those Who Manage To Arrive

Migrants, little water and no breaks during the transfers. A policeman: “If there is any problem, we’ll take care of it”