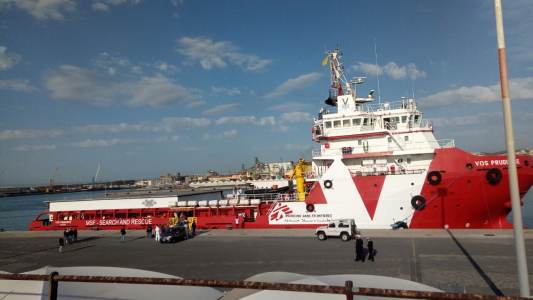 Yesterday morning, Médecins Sans Frontières‘ vessel, the Vos Prudence, landed the bodies of another six people who died at the border. Five of them are young women, whose bodies seemed to have remained at sea for around a week before being recovered from international waters, respectively 42 and 20 nautical miles from the Libyan coast. The sixth body belongs to a man, and was transferred by Save the Children’s vessel, the Vos Hestia.

The policy of closing the borders and pushing migrants back continues to reap its victims, even amid the deafening silence of the media, where the NGOs are perversely criminalised and denigrated – the very people trying to stop the massacres at sea. They have now become witnesses who are perhaps too uncomfortable to be “tolerated” anymore by governments working in international waters.

Since the start of 2017 there have already been 1,090 people who have certainly lost their lives while trying to reach Europe across the sea, not having any safe and legal methods by which to do so.

“We need to stop all the polemic over the NGOs working at sea for moment, and hold a minute’s silence for all these dead without names, those who represent the direct consequences of hypocritical, unacceptable European migration policies” says Michele Trainiti to the journalists gathered, the coordinator of search and rescue operations for MSF.Yesterday there were, however, yet again very few of us at the port to wait for the bodies, while the blue bibs of Frontex agents whirled around, along with Carabinieri and police uniforms. There was no sign of concern from the institutional agents, and very little coverage by the media. These are the dead who represent only uncomfortable witnesses, because they force us to come face to face with death and violence, the only possible consequences of policies of war and rejection supported by our government.

For this reason some people want to keep them invisible, while we will continue to remember them.