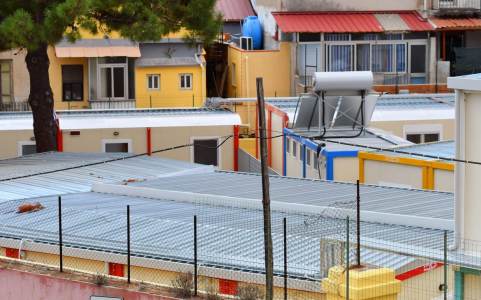 Taken from StampaLibera – An overcrowded shanty town made up of dozens of containers built out of zinc sheets, tents, fences and dividing gates. A few rickety toilets and three halls with a hundred bunkbeds, one attached to the next, packed together, suffocating. A modern concentration camp for the immigration policies of “containment” and control instigated by the EU and all Italian governments since August 2014, when the ‘initial reception centre’* was opened at the former “Gasparro” barracks in Bisconte, Messina, further expanded in Summer 2016 with a zoo-Hotspot area for the identification procedures, detention and expulsion of “unwanted” migrants, in compliance with the electoral-security campaigns of Minniti and the PD before, and of Salvini and the Five Star Movement today.

Unsustainable, inhumane living conditions; for many – too many, defeated time. Months and months waiting for a transfer to a livable, dignified centre or to know the result of their asylum request. An invisible hell, well concealed from the city’s eyes thanks to insuperable walls. Unknown to the power that matters in Messina and willfully forgotten by administrators, politicians and council groups.

It has been necessary to await the epilogue to the shameful odyssey of the migrants sequestered on board the Coast Guard vessel the Diciotti for the existence of the Hotspot in Bisconte to obtain a little of the media attention it deserves. The new council, led by mayor Cateno De Luca – a good emulator of the Fascistic, xenophobic father-in-chief at the Interior Ministry – thus managed to “discover” the Gasparro ‘hotel’ in order to request its immediate closure and the simultaneous transfer of all of the ‘guests’ housed in the countless shacks in the city suburbs.

In his chaotic demagogic rant, the mayor nevertheless made one good point. He managed to dig up a document in the council archives which had hitherto been inexplicably hidden away, that shows the inexcusable abuse in the zinc-shanty town erected a year ago in Messina.

The act in question was redacted by the council works department on 10 May 2017 (that is, two months before the beginning of the construction of the Hotspot). It bears the signature of the director (the architect Antonella Cutroneo) and is addressed to the limited company “Tomasino Metalzinco” based in Cammarata, Agrigento, the company that won the bid for the “realisation of a temporary structure for migrant reception” within the instructure of the former military base. “It is noted, in a preliminary manner, through the technical evaluation effected on the basis of the documents provided, that the intervention (proposed according to article 7 of the DPR, n. 380/01 lett. b) is in conflict with the city and building requirements of the Regulatory General Plan and the Regional Masterplan for the Bisconte area, the area falling within an urban park and green public zone”. These are the words of the comment by Cutroneo, who states that she is nevertheless available to meet the managers of the project together with the architect Salvatore Parlato, another agent of the council works department.

In support of the serious considerations laid down, the department head attached a specific note signed by the council technician, Ignazio Collura, sent to the department on May 9th. “From an examination of the documents provided, it is clear that the area identified for the intervention occupies an area of around 3,800m2 within the “Gasparro” barracks, in a part of section 218 of survey map 119 which, according the Regulatory General Plan and the Regional Masterplan, falls within public services or of public use, in a green zone according to article 22. One also notes this from the maps provided by the Planning Office”.

“The area will be divided into four zones through the use of metallic fences of 2 metres height, thus distinguishing between a zone for staff and other people; a housing zone; a dining zone; a technological zone. The works include: the internal installation of the area including the fence and the removal of a tree, implying the removal to another area to be determined; the moving of the entrance gate; the placing of pre-fab structures to house the migrants, constituting 22 housing modules; the placing of pre-fab structures for services (police, nurse, warden, wardrobe, showers, WC…) on single and double floors; a tent-structure for the canteen.”

The evaluation of the project was clearly negative. “One sees that inasmuch as a detailed relation on the works still needs to be realised, the documentation presented is not adequately supported by a detailed planning design”, explains the technician from the department of works. “The above comments in consideration, this kind of intervention appears incomparable with the zone falling within the Masterplan, which includes the maintenance of tree coverage. It remains to be evaluated whether this form of structure, hygenic rules aside, would respect standards relating to the rules governing area/service users, in order to guarantee people’s stability and living condition”.

It is precisely this issue of “living conditions” at the camp-Hotspot in Bisconte that the council technical relation expresses their greatest reservations. “The modular units presented in the project are laid out one next to the other, along the edge of the ground, next to a surrounding wall of around 4m-5m high and at a distance of around 1m (graphic measurements). This setting, aside from being in contradiction to regulations, does not allow for airing of the spaces”, Collura explained. “The modular living units are composed of a single block measuring 5mx6m for 12 beds each, deprived of appropriate openings for ventilation and natural light…”.

The works were thus in contradiction to planning rules and entirely “inhumane”. Who authorised the beginning of the works, and in what way? And above all, why did the former mayor, Renato Accorinti, and the council engineer Sergio De Cola (apparently against the Hotspot) fail to block the realisation of the Hotspot or bring to light the eventual problems and violation of minimal living standards and migrant reception? And why was the entire former administration characterised by a complete lack of desire to listen to the complaints of anti-racist activists regarding the sustainability and incompatibility of the project to expand the camp/centre in Bisconte?

Right from the start, the planning for Messina’s semi-detention mega-centre was characterised by torturous bureaucratic steps and unexpected u-turns. The tender for the “provision and initiation – including transport, installation, erection, maintenance and dismantling – of a temporary structure constituting a tent-structure and pre-fab modular units, fencing and gates, dividers, furniture and signing for the reception of migrants” was published in the Official Gazzette on 13 June 2016. In Autumn the first section of works was entrusted to a well-known company from Modena, to make wooden pre-fabs, followed by two appeals in the Regional Administrative Court of Catania by the excluded companies. This led to their re-admission in the tender, and a second process that was then suspended due to the anomalous bid made by the new winning company. Finally on 6 February 2017 the Official Gazzette published the definitive award of the tender to “Tomasino Metalzinco” with a lowering of the complete value of the tender of €1,932,000 by 35.3%.

The commencement of the works at Bisconte had to wait till the 1st July 2017; the majority of the subcontracted works have been handed out to other small companies based in Cammarata (Siciliana Costruazioni Srl and Focolari Srl) while the delivery of the zinc-shacks was made at the beginning of September 2017.

An inspection by Borderline Sicilia in mid-November provided a detailed view of the effects of the new expansion works on the living conditions of the migrants in the centre. “Despite the works having been compleyed only recently, it is nonetheless possible to see that the safety regulations are clearly inadequate. There is only one safety exit and if we take into account the fact that there are more than 600 residents, one can understand the impossibility of managing the centre in the situation of an emergency.”

“Finally, the inefficiency of the works is even clearer after speaking to many of the CAS residents: due to the serious flooding in many of the areas after recent rainfall, many of them were forced to sleep on cots laid out in large tents. The organisational precarity of the structure is obvious from the first glance from outside: there are no social spaces; the migrants are obliged to hang their clothes to dry on the dividing fences; some of the toilets are portaloos; and, as some of the migrants have told us, hot water is only available occasionally throughout the day. Furthermore, clothes and shoes are only handed out when people enter the centre and the situation usually remains as such for a resident’s entire period of duration there.”
“The old barrack’s residents, however, are forced to live every day under the pressure of a reception system which is slowly crumbling, and in a limbo of seemingly endless waiting. This waiting time appears to have no aim other than to incentivise the majority of the residents to escape this looming apathy by leaving the centre, making the process of requesting international protection and of social inclusion even harder.”
The current system is an widening vortex which only produces irregolarity on the one side and hatred, xenophobia and prejudice on the other. The mirror image of this situation is shown through the various protests organised both by some residents of the Bisconte neighbourhood as well as those by the migrants themselves, who have tried to make their voices and discontent heard on numerous occasions. Despite the media silence, the migrants’ latest protest, on 6 November 2017, followed the flooding of a part of the centre. The protest had no effect, inasmuch as the conditions have remained the same…”

Lampedusa: The transfers and deportations resume, and the protests continue