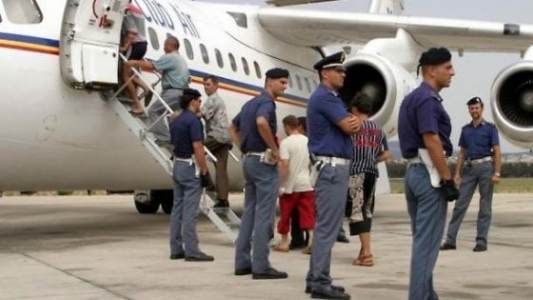 Africa-express.info – Nine ghost flights to deport hundreds of Egyptian citizens. We do not know their faces, names, age, hopes and shattered dreams. We do not know the real reasons for abandoning their homes and families and undertaking a long and dangerous journey across seas and deserts.

To tell the truth, we do not even know how many people have been rejected or deported in only six months because the accounts of the state bureaucrats are anything but precise and thorough. At least 180 Egyptians, but they could also be 350. People are talking about “repatriation and readmission” but in three cases the destination airport is not located in Egypt but in a third country three thousand kilometers away.

We do not know to whom and with which assurances the Egyptian citizens who illegally entered Italian territory were handed over and who and how, in Rome, has verified if they had not fled from the bloody repressions of general Al-Sisi’s regime. The regime enforces disappearances, extrajudicial killings, and torture – which everyone in Italy is aware of, after the tragic case of the researcher Giulio Regeni and the indefinite imprisonment of Patrick Zaki, a student if the University of Bologna.

The announcements of the contracts for the transportation of immigrants by air, issued by the Department of Public Security of the Ministry of Interior (Central Management of Immigration and Border Police) can be consulted on the website of the State Police. They outline an unprecedented and disturbing scenario: between March 19 and August 31, 2021, the Italian authorities spent 652.290 € to charter nine planes and deport an unspecified number of Egyptian citizens who were “addressees of deportation and rejection orders by the chief of police”.

These actions are despicable due to the climate of violence and oppression in the North African countries and the unjustified expenditure of financial and human resources. Between 650 and 1.000 police officers were involved in the ‘necessary removal and the escort services’ for the immigrants and potential asylum seekers. The costs of this (international) mission are unquantified, including for example the costs for transferring the Egyptian citizens from detention and repatriation centers to the embarkation airports.

“It is possible to carry out the repatriation of Egyptian citizens, who have arrived illegally on national territory, following the completion of the necessary procedures for the identification of the subjects, in accordance with the Cooperation Agreement between the Italian Republic and the Arab Republic of Egypt regarding the readmission on January 9, 2007”, state all of the nine negotiated procedures with which the State Police outsourced the air transport of migrants to private companies.

“The repatriation of foreigners who are the recipients of expulsion orders must always be carried out immediately, or if the person concerned is detained in a CPR*, as soon as the transitionary situations that hinder its execution have been overcome, regardless of the period of detention that may have already been validated by the Judicial Authority (…). It is therefore considered an essential need to ensure the repatriation of Egyptian citizens who have been ordered to leave Italy, by chartering an aircraft and related services”.

The first readmission flight took place on March 19, 2021, and included “20/30 Egyptian citizens” who were accompanied by “approximately 70/90 police force personnel”. The plane took off from Rome Fiumicino and after a stopover in Palermo Punta Raisi it unbelievably ended its journey by landing in “Hammamet (Tunisia)”.

The rental cost of 85.000 € was entrusted to PAS Professional Aviation Solutions S.r.l., a company based in Milan, which carried out five other transports of Egyptian migrants throughout the year.

On April 13 the police authorities repatriated another “20/40 Egyptian citizens” via a direct flight from Rome to Cairo, then again on April 27 (departure from Rome Fiumicino, stopover in Palermo and final destination once again Hammamet-Tunisia, cost 92.000 €) and on the May 21 (departure from Fiumicino, stopover in Bari Palese and Palermo and arrival in Hammamet, cost 53.900 €).

On June 21, another group of migrants was handed over to the Egyptian police authorities after having flown on the Fiumicino-Palermo-Cairo route. On July 2, with an aircraft hired from EgyptAir, the route for “readmission” to Egypt was Fiumicino-Bari-Cairo. On July 13, a flight departed from Trieste Ronchi dei Legionari with a stopover in Rome and the Egyptian capital as final destination.

The last “readmission” operation of around thirty Egyptian migrants took place on August 31 using the Rome-Bari-Cairo route. In the year 2000, there had only been two repatriation flights from Italy (January 21 and February 7) using the same route Rome-Palermo-Cairo, at a combined cost of 115.990 €.

The Cooperation Agreement on readmission and the prevention of irregular immigration, which was used as the legal basis for the increase in flights for ghost passengers, has unexplainable survived the “revolutions” and coups that have shaken Egypt during the last decade. The agreement was signed in Rome on January 9, 2007, by the then Deputy Minister Ugo Intini (Prime Minister Romano Prodi, Interior Minister Giuliano Amato, Foreign Minister Massimo D’Alema) and the Deputy Minister of the Republic of Egypt, Mohammed Meneisi.

The agreement remained in force despite the removal of President Hosni Mubarak on February 11, 2011, by the Supreme Council of the Armed Forces led by General Mohammed Hoseyn Tantawi, which was followed by the controversial election of Mohamed Morsi (Muslim Brotherhood) as president in June 2012 and the military coup on July 3, 2013, with the temporary presidency of magistrate Adil Mahmud Mansur and finally the rise of general Abdel Fattal Al-Sisi to power (June 8, 2014).

During the most critical phases of the relation between the two countries – after the Regeni murder – the Egyptian authorities threatened to unilaterally suspend the validity of the agreement. However, the high number of repatriations in the last six months confirms instead that “irregular” migrants are a fundamental business in the Italian-Egyptian alliance on an equal level with the import-export of weapon systems, gas, and oil.

According to Article 2 of the Agreement each contracting party must “readmit any of its nationals who do not fulfill the requirements of the immigration legislation in force, provided that it can be proved or reasonably assumed that they are nationals of the requested state”.

This counts for readmission requests to which the two parties reply within 21 days, otherwise a silence agreement applies. Article 7 includes the possibility of third-country nationals transiting through the territory. The agreement made here states that it is compulsory that there are no more than three people at a time, there must be a description of the transit route and the country of destination must be certain.

Article 2 in the attached executive protocol, states that the readmission of nationals of the contracting state and the procedures for the transit of nationals of third states shall take place at the border crossing points of the international airports of Rome Fiumicino, Milan-Malpensa, and Cairo.

Reading Article 5 generates a shock: “Whenever the parties assess, by mutual agreement, the existence of cases of urgency and necessity or humanitarian cases, the procedures to determine the identity of the person whose readmission is requested may be carried out on the territory of the requested party (i.e., the country to which the readmission request is addressed, ed.)”. “In such a case – it is added – both contracting parties shall agree on time and means of transportation as well as the guaranteed for the return of those found not to be nationals of the Requested Party”.

The migration policies of the Egyptian government are on the radar of major human rights organizations. Amnesty International notes that last year there were countless cases of arrest, illegal detention and mistreatment of refugees and foreign migrants in Egypt.

It is unimaginable that in case of discovery of any error in identification, the person will be able to return and will be welcomed back to Italy. Furthermore, it is difficult to understand why the Egyptian citizens were transferred to Hammamet, a south-eastern Tunisian town. A misprint repeated three times in different police documents? Or the concrete risk of deportations by the military to the neighbouring Libyan hell? Prime Minister Draghi and Interior Minister Lamorgese have the duty to explain this as soon as possible.

Translated from Italian by Clara-Marie Pache

Deportations From Italy, With Frontex’s Help

Quarantine ships, a model designed for repatriation. The testimony of a legal operator

Pozzallo, arrival by boat of 40 migrants from Central Africa. Currently housed in a gym, possibilty of repatriation.

The Right of Asylum becomes a Utopia

Relatives of the missing Tunisians, ‘We can’t believe in any of the information which arrives. The only thing we can believe in is fate.’