Last June 3rd we
were invited to the initiative in memory of Alexander Langer organized by the Green Party atthe European Parliament. With us were the friends of The Langer Foundation who
awarded Borderline Sicily their prize in 2014. Our intervention was centred on the urgent measures, proposed
by the European Commission to contrast the traffic of Human Beings, stressing the
necessity of using suitable means.

Human trafficking is,
first of all, a humanitarian matter, therefore it must be dealt with means that
safeguard and protect human beings.
Neither militarizing the
Mediterranean Sea, nor conducting military operations in Libia are possible
ways to contrast such a phenomenon that, on the contrary, would spread, rising
the risk for life of the many who are compelled to cross Libia in order to
reach Europe.

Alexander Langer asked for “ always keeping on mending the World”. But
a good mending needs the right tools, that are nursing, constructing, certainly
not declaring war! Aiming to the real protection of refugees—who risk their
lives crossing borders (they can die on all borders, not only on sea) in order
to escape from wars, starvation, dictatorships, due to the current national and
European politics—requires the immediate opening of humanitarian channels and a
conformity in the rules of right
of asylum inside the European Community.

The current protection and
hospitality system is too often marked
by a violation of the basic rights, in primis the one about self-determination.
Procedures for protection request last beyond the reasonable terms of law and
the most of people seeking Asylum are destined to spend their waiting time in
Centres of first Accomodation that – offering nothing else than food and lodging
– represent a serious limit to their independence and social inclusion. For
instance, in Italy the time required to examine petitions for protection
provided by law should expire within 35 days, or a maximum lasting time of six
months but nowadays it can be extended
up to 2 years.

This is the reason why it
is so urgent that national and European politics over the right of asylum and immigration,
intervene in current procedures and take measures towards the application of those
fundamental rights and liberties fixed in the ECHR*, at last realizing that democratic investment
that was in the words of Alexander Langer when urging all of us to open our
doors. 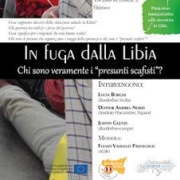