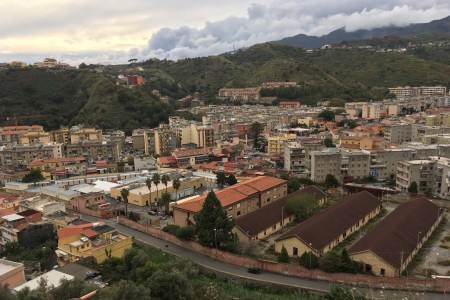 The situation at the former ‘Gasparro’ barracks in the Bisconte neighbourhood in Messina is only getting worse – especially now that, since the end of September, the extant Extraordinary Reception Centre (CAS)* has been joined by a complex of prefab containers, officially functioning according to the Hotspot approach.

Messina – the complex at the former barracks at Bisconte

There are two different structures managed by two different cooperatives in this area. In the centre there is the CAS, managed by the Senis Hopes cooperative, with a maximum capacity of 200 people, spread over three sections. The Hotspot lies beyond a metal fence which separates the two zones. It is managed by the cooperative Badia Grande, and is made up of prefab containers with a maximum capacity of 250 people. Only a single gate guarded by the police allows entrance into the zone of the prefab containers into which all of the identification procedures have been moved, procedures which used to take place at the port of Messina itself during the landing operations.

Contact between the temporary residents of the two centres barely exists, and in fact we found almost no awareness among the migrants of what was going on one or other side of the fence. The residents of the CAS are almost all men from Subsaharan Africa who have been classified as potential asylum seekers; the currently empty Hotspot, however, has previously been home to men and nuclear families from North Africa classified as economic migrants, destined to receive rejection notices.

Despite the works having been compleyed only recently, it is nonetheless possible to see that the safety regulations are clearly inadequate. There is only one safety exit and if we take into account the fact that there are more than 600 residents, one can understand the impossibility of managing the centre in the situation of an emergency. Furthermore, as many of the residents from the CAS have told us, the bunkbeds are placed extremely close together, making access slow and difficult, as well as blocking any possibility of privacy. Finally, the inefficiency of the works is even clearer after speaking to many of the CAS residents: due to the serious flooding in many of the areas after recent rainfall, many of them were forced to sleep on cots laid out in large tents.

The organisation precarity os the structure is obvious from the first glance from outside: there are no social spaces; the migrants are obliged to hang their clothes to dry on the dividing fences; some of the toilets are portaloos; and, as some of the migrants have told us, hot water is only available occasionally throughout the day. Furthermore, clothes and shoes are only handed out when people enter the centre and the situation usually remains as such for a resident’s entire period of duration there. In fact, we have seen for ourselves that despite the cold weather, many of the residents of the centre walk around the city in Summer clothing. Aside from being dehumanising, this also hinders personal hygiene: many of the young man have shown us rashes and hives on their body.

From the accounts we have gathered, it is also clear that there is a problem in the pace of filling out the C3 form (to request asylum). Without the initiation of this step, the asylum seekers cannot enroll in the national health system. As a consequence, their only possibility of accessing a family doctor is through “Temporarily present foreigner” code (STP). Yet the staff in the centre do not seem to help even with this. We have even heard that in order to deal with this serious lack of assistance, some of the young men with health problems have been forced to search for help outside of the centre of even wait for their transfer to another structure.

The waiting periods are extremely long and accompanied by a serious lack of legal information: according to the accounts we have gathered, the C3 form is not completed until after 3 months in the CAS and, furthermore, the only order given in the meantime is simply to wait, without any further explanation.

In the context of this environment of badly managed reception in which the residents’ wellbeing is always secondary to other priorities, even the method of distributing the residents’ pocket money is mismanaged. The Sicilian context has taught us that the managing bodies are ingenious in their methods by which they guarantee the famous €2.50/day: there are those who have chosen packets of cigarettes and those who use top-up vouchers which can only be used in the snack machines. Senis Hospes, on the other hand, has opted for meal vouchers. The consequence of the choice has been catastrophic: extremely long queues at the supermarkets, meaning that many shopkeepers have even refused to accept the vouchers; great difficulty in managing the €2.50 in vouchers and their consequent reselling in order to use the money freely. That is, a black market in meal vouchers, but also a form of begging once you realise that any other need has no other way of being met.

The old barrack’s residents, however, are forced to live every day under the pressure of a reception system which is slowly crumbling, and in a limbo of seemingly endless waiting. This waiting time appears to have no aim other than to incentivise the majority of the residents to escape this looming apathy by leaving the centre, making the process of requesting international protection and of social inclusion even harder. The current system is an widening vortex which only produces irregolarity on the one side and hatred, xenophobia and prejudice on the other.

The mirror image of this situation is shown through the various protests organised both by some residents of the Bisconte neighbourhood as well as those by the migrants themselves, who have tried to make their voices and dicontent heard on numerous occasions.

Despite the media silence, the migrants’ latest protest, on 6 November 2017, followed the flooding of a part of the centre. The protest had no effect, inasmuch as the conditions have remained the same.

The discontent of the locals was demonstrated on 19 October 2017, when some residents took to the streets to block the space infront of the former barracks with some garbage bins, leading to moments of fierce tension. The protest was organised in order to request greater protection and security for the locals who, among other matters, have requested the return of street lights given that they now feel threatened by the untolerated presence of the migrants.

The Hotspot and CAS have been established in a neighbourhood which has already faced various problems for some time: Bisconte is, in fact, an area which has been passed over by institutional bodies despite repeated, vocal requests for regeneration and, without any real response.

It is unacceptable that such paradoxical choices continue, ones taken without any thought or common sense, and which guarantee neither a functioning reception system nor integration. In this instance, the necessary assessment of the local neighbourhood was clearly absent: two kinds of centre have been introduced into a context of unease and abandonment, centres with further issues and difficulties which have simply added to pre-existing problems in the neighbourhood.

Remembrance by the Few, Silence of the Many. Three Landings and 29 Bodies at Pozzallo.