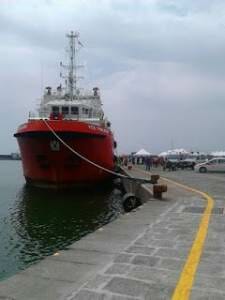 The week
just gone by is being singled out as “one to forget” by the TV and newspapers
which provide the continuous facts and numbers of disembarked migrants, the
dead and the lost at sea. We have to ask ourselves how it is possible, indeed,
that we continue to ignore, to have no memory of the thousands of refugees who
have died over years through attempting to reach Europe. In less than seven
days there have been three shipwrecks, with 70 victims verified but more than
700 people missing, and the possibility of establishing safe passage for the
fleeing is still not being considered. To be honest one can only feel anger and
shame to be part of a community so inhumane, one, which occupies itself only
with protecting its own interests and Fortress Europe’s borders.

On Saturday
884 migrants were brought to the port of Catania on board the Vos Thalassa, a
tugboat which was too small for transporting so many people in dignified
conditions. For “security reasons” we were forced to follow the landing
operation from a significant distance, along with the majority of journalists –
but the restricted size of the tugboat did not escape us, nor did the cries
from within. As the Prefecture confirmed later, there was a great deal of
agitation on board: the migrants, literally crammed together, pushed forward to
alight from the boat as soon as land was in view, evidencing their own
legitimate suffering with one voice. Among them were 120 women and as many
children, who had left Libya on four different boats and dinghies. Originally
from Eritrea, Ivory Coast, Mali, Bangladesh and Gambia, some of them had spent
four days at sea before being rescued.
They reach
the port at its furthest point; from far away, we can see the immediate
transferral of the pregnant women, and the way through the tents for
pre-identification. With the exception of the minors, all of the migrants who
arrived today will be taken immediately to centres in North Italy, via the
eighteen buses parked up on the quay. We ask ourselves if there will be an
attempt to carry out screenings of the most vulnerable cases, if there will at
least be a change of clothes for those who have arrived after a journey of
thousands of kilometres, if the organisations present have been able to provide
the information guaranteed by law to those who have just realised that they
have survived but must now attentively respond to questions which play with
their future. This week we have met more Eritrean migrants outside of the CARA*
centre at Mineo, to where they were taken following the last landings. Forced
to flee from the oppression of a military dictatorship, they now find
themselves in Europe, trapped in a system, which categorises and controls them
through techniques of government quite distant from those belonging to a
democracy. “We have all been transferred here, they have taken our fingerprints
– without any force – but then we didn’t understand well where we do or don’t
have the right to go to. We don’t even understand if we can stay in Italy or
whether we have to be transferred to some place we don’t know.” These are the
word of B., a young economics student who, like so many others, has fled from
the bonds of military service, which weighs down on so many young Eritrean men.
And like him, many of the companions on his journey now wait inside the CARA in
order to find out their fate, and above all their rights.
On Saturday
other migrants from Eritrea and Somalia were brought to the port of Augusta, in
two different boats, which arrived, exceptionally, within a few hours of each
other. The first group comprised 515 people, the majority of whom are
originally from sub-Saharan Africa who left the Libyan coast in four different
dinghies, while a Maltese coast guard ship rescued another 225 refugees who
left from the Egyptian coast. For this
last group, the voyage seems to have been extremely long and strenuous, last
around nine days. We can only imagine and listen to the future accounts regarding
the horrendous conditions in which the survivors – fleeing abuse and torture –
have struggled against almost certain death.

The ever-worsening
physical and psychological conditions of those who arrive are in fact he
embodied testimony of the ferocious violence meted out on those who are on the
run. The silences, the empty stares and the words, which begin to bubble up
become the direct proof of the daily massacre which is subsuming the sea and
beyond. Many of the 657 migrants who landed at Pozzallo have reconstructed the
horrific period of their journey, in which friends, relatives, children and
travel companions drowned at sea before their very eyes. These accounts speak
of hundreds missing, of death and desperation, before which only the truly inhuman
could remain indifferent. The particularly critical health conditions have
meant that 47 people taken to land on a speedboat the previous evening, and
brought to hospitals in Ragusa, Modica and Vittoria. Many more have scabies,
and around 500 people have been transferred, while only 270 seem currently to
reside in the Hotspot at Pozzallo. Checks, identification procedures and
investigations continue with the full rhythm of an attitude of repression in
the face of those who are forced to flee and die every day. These are massacres,
which we want to deliberately ignore so as not to fully recognise our own
complicity.