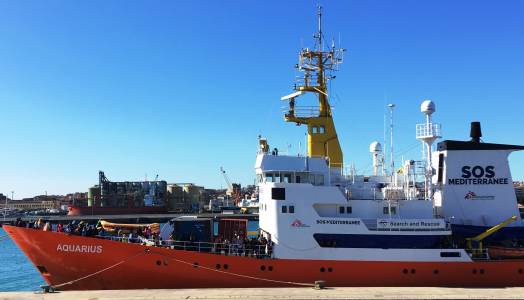 Many of the articles regarding the diatribe between the major of Messina, Renato Accorinti, and the prefect, Stefano Trotta, on the issue of unaccompanied minors have been published the last days. Two months before the deadline for handing over the management of the facility for unaccompanied minors in the structure of the former Ipab* ‘Scandurra Conservatori Riuniti’ to the cooperative Ahmed, the communal administration has been accused once again by the prefecture of being completely disinterested with regard to the reception situation of unaccompanied minors.

The Ahmad centre was opened out of exceptional circumstances through an order of the prefect last October because of insufficient places for the reception of youngsters from the disembarking. However, in the meantime, the administration did not comply with its responsibility to arrange facilities that are suitable for the reception of minors – and considering the deadline, the prefect is soliciting for finding an appropriate accommodation for about 200 minors who currently reside in the centre.

But the Ahmad centre is not the only facility set up because of exceptional circumstances. Since November 2013, Messina is hosting a tent camp of 32 tents for a maximum capacity of about 250 persons, which should have been an absolutely temporarily solution in order to address the increasing number of migrants arriving by sea. This so called ‘emergency’ involves the whole of Italy since the late ‘90s, but is still managed as a sudden emergency, without a long-term program and suitable places for the reception of people who arrive every year in search of help and protection after risking their lives in a long and dangerous journey.

At the dawn of the second birthday of the tent camp and with the increasing number of disembarkation, which concerned the city particularly this year, someone started to show indignation for the terrible reception testimony that the city of Messina has been showing, and for the injustice of such a situation. Winter is approaching, the cold and the rain will arrive also in Sicily and someone is thinking about those who will be forced to spend the next months in a tent – with the risk of flooding (as a result of strong rains in December 2013 the camp had been evacuated).

The tent camp is located within the 5th District of Messina and Paolo Barbera, councilor of the district, became the spokesperson for the precarious situation of migrants for almost a year. Last May a first interrogation has been presented to the mayor and the prefect for favoring volunteer activities among the asylum seekers. Barbera is of the opinion that similar activities can be an incentive for migrants, who are often not involved in any type of initiatives. Furthermore it would be a way for creating encounter opportunities with citizens and thus for reducing xenophobic feelings that are given by the mistrust and fear – which, in turn, result from unknowingness. He later manages to bring the whole district to decide for a new interrogation, again addressed to the mayor and the prefect, requesting the closure of the tent camp and asking for an alternative suggestion regarding the organization of migrants’ first reception. While portraying numerous critics on the management of reception of migrants in Messina, he addresses the authorities expressing his wish of a transition ‘from the camp form – i.e. a concentration of about hundred persons in single and precarious facilities – to a more diffuse reception that should be rooted within urban centres in a more capillary way’.

Paolo Barbera explains to us how such a diffuse reception, understood as the accommodation of smaller groups of people in smaller facilities, would be preferable on a human level and absolutely feasible in regard to the facilities. There are a lot of empty or abandoned apartments in the city of Messina that are suitable for living in dignity. These would be smaller places compared to a big centre and more spread within the social urban network. They would offer a more qualitative lifestyle to those who would live there, not only in regard to social relations but also to privacy, and they would favor a direct contact with citizens of the neighborhood thus diminishing the risk of ghettoization and social exclusion.

From an economic point of view, the advantages from which the city would benefit are the fact that currently empty houses would be inhabited and a rent would be paid. While regarding the urban décor there would be a requalification of places that are being abandoned.

The positive sides that would derive from the implementation of this proposal of the 5th District are evident and all would benefit from it, first of all the migrants, but also the citizens and the city itself. Necessary, however, would be the valorization of attitudes based on rights respect as well as the expulsion of attitudes of speculation and patronage, which are amply funding our current system of reception.

According to the communal regulations that followed the new interrogation, the mayor should respond within 30 days, but the 5th District already expects to not receive any response as they say has happened in the past in similar situations. In such a case, though, they are determined to continue pressuring until something is done about the tent camp of Pala Nebiolo, because that is not the reception that Messina has to offer.

Immigration. The call for reception centres in the province of Trapani and the investigations in the centres.