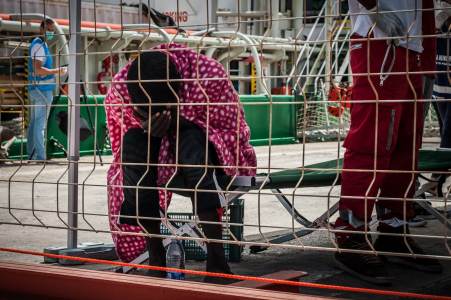 A new report reveals the daily brutality suffered by migrants in Libya at the hands of local militia, human traffickers and criminal gangs. It represents an urgent call to revoke the deal between Italy and Libya and for a change in direction of the EU’s policies on controlling the flow of migrants.

Rome, July 6th 2017 – Every kind of violence, illegal detentions, rape and torture. This is what migrants and refugees in Libya suffer according to the new report  “The Hell Beyond The Sea”, put out today by Oxfam, Borderline Sicilia and MEDU (Doctors For Human Rights) to coincide with the discussions between European Ministers of the Interior in Tallinn, and the “Solidarity and Security” conference organised in Rome today by the Italian Foreign Minister along with the High Representative of the European Union for Foreign Affairs and Security Policy, Federica Mogherini, and the Foreign Ministers from African countries of emigration and transit flows. The principle objectives of both meetings include the “closure” of Libya’s southern border and the strengthening of cooperation between Europe and North African countries.
In the “background” however, there are hundreds of people who have arrived in Sicily over the past year who  tell of having been beaten, abused, sold and illegally arrested by local militia, by human traffickers and armed gangs who “control” large parts of Libyan territory. Men, women and children fleeing from war, persecution and poverty in their home countries who have arrived with the expectation of finding a better life in Libya, the gateway to Europe – only to then discover that they have fallen into hell itself.
“You Don’t Feel Human Anymore”: Accounts Of Abuse Suffered In Libya
The quotation above sums up many of the accounts which have been gathered. To provide a snapshot: 84% of those interviewed claimed to have suffered in human treatment, including brutal violence and torture, 74% suffered deprivation of food and water, and 70% have been imprisoned in sites of official or unofficial detention.
“I was arrested by an armed gang while I was walking along a street in Tripoli.” The story of H.R., 30 years old, from Morocco. “They took me to an underground prison and told me to ask for money from my family […] They beat and cut me over and again with a knife. […] A muscle in my left arm was totally cut through […] I was about to die from the beatings […] They violated the men regularly. To make us afraid, they the screams from the violence the detainees were undergoing was amplified in the different rooms.”
“There were around 300 people in prison […]. They made me do all kinds of work […] They rarely gave me anything to eat. They beat me and sometimes tortured me […]” adds C.B., 28 years old, from The Gambia.
“[…] I left my country and joined my brother in Libya” recalls K.M., 27 years old, a woman originally from Ivory Coast, interviewed in the CARA at Mineo. “One day a group of soldiers came into our house […] They beat me and violated me in front of my brother and daughter. My brother tried to defend me and was savagely beaten […].”
“These are horrifying accounts which we can hardly even comprehend.” claims the Director of Oxfam Italia, Elisa Bacciotti. “Accounts from migrants who we have been helping for a year through the OpenEurope project, mainly in Sicily, who have provided us with a disturbing glimpe on what it going on on the other side of the Mediterranean. Faced with this situation we have to ask ourselves where Europe’s sense of humanity might finish, as well as that of many many member states. In the best of cases the members states seem open to offering Italy and African countries simply more help in controlling the borders, and not the protection of human rights.”

The Effects of the “Closure” of the Central Mediterranean Route
In the context of these clear violations of human rights suffered by migrants in Libya, Italy and the EU’s goal to strengthen control of the migrant flow is still more concerning. This is true not only of the route from Italy to Libya but also through financing countries of transit such as Niger, Mali, Ethiopia, Sudan and Chad to cover up greater collaboration over border control and in procedures for expulsion and deportation, without any stipulation to respect the protection of migrants’ human rights. These measures seem to be designed to close the central route of the Mediterranean, without putting in place any mechanisms for regular and safe entrance to Italy or Europe. The risk, therefore, is simply creating “new hells” for those fleeing conflict, abuse, violence, hunger and poverty.
“This would be a situation in which the lives of thousands of migrants would be left even more at the mercy of networks of human traffickers, operating not only across the Mediterranean but directly in Libya and the African continent. The number of deaths at sea would increase, which in2016 was almost 6,000 and already 1,985 since the start of this year. Bacciotti adds. This is an unacceptable situation to which would be added the effect of the first deportations to Libya.
“The deal between Italy and the Al Sarraj’s so-called Government of National Unity, if it is fully applied, would send people back to a country ruled by chaos, with systematic abuse of the rights of those fleeing war and poverty, and where the migrant centres are modern day concentration camps” Bacciotti continues.
“Already in 2012 the European Court of Human Rights condemned Italy for having carried out collective push-backs at sea towards Libya in accordance with the bilateral agreement signed under the regime of Colonel Gaddafi in 2008. Italy was guilty of violation of the ban on inhumane and degrading treatment under Article 3 of the Court of Human Rights” – states Germana Graceffo of Borderline Sicilia. “The International Criminal Court is currently investigating Libya for crimes against humanity. It is unacceptable that the Italian government is complicity with these criminals through this kind of agreement, an act to which sooner or later it will have to respond.”
Furthermore, such agreements, as well as being of grave concern in relation to human rights, are far from effective. Despite the training of the Libyan Coast Guard by the EUNVFORMED mission and the donation of motor boats by Italy, the arrivals from Libya by sea have only increased – 13% more than last year.
A Call To Italy And Europe For A Radical Change Of Direction
In the context of an extremely fragile country where, according to UN estimations, 1.3 million people require humanitarian assistance, Oxfam, Borderline Sicilia and Doctors For Human Rights are launching an urgent appeal for a radical change of direction for European and Italian policies relating to the management of migration. The priorities are:
The full version of the report, “The Hell Beyond The Sea”, is available here.
Project “OpenEurope” – Oxfam Italia, Diaconia Valdese, Borderline Sicilia Onlus
Translated by Richard Braude
https://www.borderlinesicilia.it/wp-content/uploads/2017/07/oxfamedu1.jpg 1065 1600 Borderline Sicilia https://www.borderlinesicilia.it/wp-content/uploads/2020/09/LOGO-NEWa-1.png Borderline Sicilia2017-07-06 18:21:402017-11-06 18:22:49Oxfam, Borderline Sicilia, Doctors For Human Rights: “Abuse, Torture and Illegal Detention in the Libyan Hell”