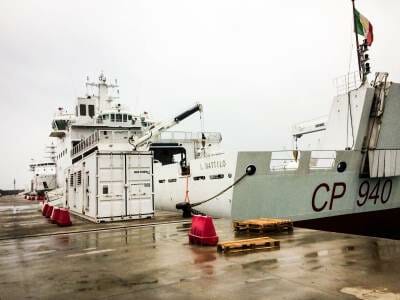 Are we really sure that we don’t want migrants? Are we sure that it’s better they stay at home and die of hunger of in the wake of a smart bomb manufactured by us and dropped by one of our allies?

No, we’re not sure at all. Indeed, we have very strong doubts, if we listen to the workers in the centres (especially those for unaccompanied foreign minors) who risk losing their jobs. Many have already lost them.
In this period of a strong drop in the number of arrivals, the Sicilian regional government continues to indiscriminately authorise new centres, in order not to make a dent in an industry that contains large sums of money. The cooperatives, for their own part, are doing everything to “find the primary material” necessary to not let go of their staff and lose their own work..

Unaccompanied minors are currently inserted (directly by Rome) into the new FAMI initial reception centres* and no longer by the social services of the local councils, along with the local police stations. The residents should then continue on to “second level” reception centres, or SPRAR centres* for minors. But there aren’t sufficient places in “second level” centres and so, even though the FAMI centres are meant to function according to higher standards, the minors are kept there for 6 or 8 months, the majority of them remaining there until they turn 18.

Given that today having a minor or a migrant in a hostel is fundamental for survival in this frantic competition, it is usually the same cooperatives who emerge – the big consortia who work with local bodies and wield not insubstantial political weight in comparison with the smaller organisations that are instead forced to back down. These consortia often change name after finishing under investigation and have to undergo a restyling in order to continue to make money off migrants’ backs. Cooperatives and consortia that have to close up shop in one province because they the prefecture finds them to be inadequate or insufficient, but manage to participate in tender processes in other provinces nevertheless.

The tendering processes by the prefectures are currently about to kick off all over Sicily, and the cooperatives will fight to the end to have their place in the sun, combatting with appeals and re-proposals. In Palermo around 2,000 places are still neeeded, because the 1,700 that already exist aren’t sufficient, even including the imminent Hotspot – despite superficial declarations by the Mayor. Apparently the prefecture has already identified a site in the north of the city.

Furthermore, many centres for minors in Palermo, no longer having minors to host, have transformed into Extraordinary Reception Centres (CAS)* for adults, carrying out a mere commercial operation, following the winds of business. This is the case at the structure on Via Monfenera, ‘Casa Marconi’, which hosts two communities for minors in the same building – Azad and Elom – but has now changed its stripes. In fact one side has become a CAS, while the other (at least for now) remains a community for minors, with the consequence that the minors and adults live in the same structure, even if on different floors. Everything is simply for tthe greater interest of the economy. Meanwhile, other CAS close because they have been deemed entirely inadequare, such as that in Ciminna.

Since January there has been a new prefect in Agrigento, Dario Caputo, who has taken over from Nicola Diomede, who ended up under investigation in the remit of operation ‘Girgenti Acque’. He finds himself with a series of impending tasks: first of all the tender for the Lampedusa Hotspot that needs to be rennovated. It will also be necessary to understand what it becomes, given that at the moment it functions as a detention centre* for Tunisians. Furthermore, he will need to find another 600 places in the reception system, doubling the current number of places, while also having to confront the fact that a large number of SPRAR centres have been closed due to inadequate conditions.

This business has no end, not even after we have raised up so many walls to block migrants from arriving. More than 200 Tunisians arrived last week between Trpani and Lampedusa. In Trapani, where two or three boats arrived without being intercepted, the migrants were brought to the Hotspost, although the humanitarian organisations were not present. Some of them were deported via Palermo. Others – those who go beyond the number of deportations agreed upon in the re-admission agreements – were left in the street with a rejection order in their hands: no one gave them the chance to ask for international protection, given that only Frontex was present. A gap in human rights, furthered by the scarce presence of UNHCR staff in the area. The UN agency, along with other organisations and NGOs, instead of coordinating themselves around a technical table to overcome the real gaps in the system, unfortunately end up re-enforcing them.

Only a few good workers with good will end up making the important leaps, even at the cost of combatting with institutions that have all too easy a fight. Rejecting or deporting a Tunisin citizens is part of the game, but if the Tunisian rebels or becomes violent, the newspapers don’t hesistate to brand all Tunisian migrants as criminals in order to justify collective deportations one more time.

Playing with people’s lives is by now a consolidated pratice, and even the UN had timidly admitted the situation of migrants in Libya, something that was already obvious to everyone: “Migrants have been subjected to arbitrary detention and torture, including rape and other forms of sexual violence”, write the Secretary General, based on the investigation by the United Nations Support Mission in Libya (UNSMIL) in Tripoli; “kidnapping for the ends of extortion, forced labour and illegal killings”, without any distinction between government centres and unofficial concentration camps. The torturers frequently wear uniforms pertaining to one of the armed forces financed by Italy and Europe. “The perpetrators” – the Secretary General establishes – “are state functionaries, armed groups, smugglers, traffickers and criminal gangs.”

We Italians are the not-so-secret organisers of massacres and violence. Last week several rubber boats ended up in Libyan hands, and the NGOs had to struggle with the Libyan Coast Guard to save the lives of their passengers, while two Coast Guard vessels were blocked in the port of Catania, one belonging to the Italian navy and another a German ship being used by Frontex. In the meantime, 180 Tunisians arrived at Lampedusa this weekend. They were transferred to a Hotspot that ought to be closed and has a reduced capacity of 90 places, and only for emergencies. Their destiny: one part of them will be deported today, and as always the excess will be left in the street, without any logic or protection.

These are illegal practices which are carried out in front of our eyes on a daily basis, while those who are left in the street are forced to put themselves into the hands of further torturers who build networks both North and South to continue their exploitation of migrants. It is enough to simply remember all of the ‘connection men’ who arrive in Northern Europe from Sicily, and all the Italians who sell the declarations of hospitality and local residence documents necessary for renewing permits to stay.

Between the tenders to open CAS, Hotspots and centres for minors, migrants represent important commodities to allow the continuation of an industry. While we continue to raise up walls in order to appease a public opinion which has been harnessed and directedby xenophobic, racist political forces, too many people are dieing in silence, buried in cemeteries without names or faces across Tunisia, Libya, Turkey or here in Sicily. The stakes are always higher, just as is the level of money made available to the same cooperatives and humanitarian organistions who play at the same table – even if on different sides.

SOS from boat, migrants rescued in the Sicilian Channel

The Messina Hotspot: Inhumanity and Abuse. An Investigation by Antonio Mazzeo

18 Tunisians arrive in Lampedusa aboard a sailing boat

Lampedusa, dinghy in difficult rescued. Coastguard and Marines save 70 migrants.