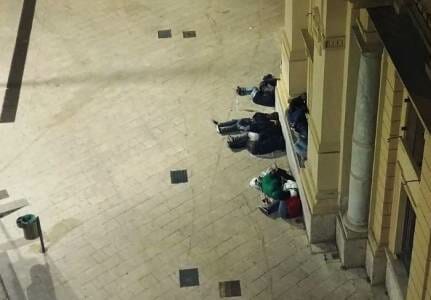 Castellana, Collesano, Geraci, Isnello, Palazzo Adriano, Ciminna, San Cipirrello, Villafrati, Marineo and Godrano: these are just some of the provincial wards where there are now Extraordinary Reception Centres, or CAS*, in the province of Palermo. There are centres dispersed among the hills of the Madonie mountain range, centres which follow on from a logic of hiding people away. Old and new cooperatives have opened their doors amid forests and agro-tourism hostels, far from inhabited centres.

It is always the migrants who are isolated in this manner who pay the price. And the isolation is not physical alone, but also – and perhaps above all – social. No one wants migrants around them, and the protests are growing in every city, town and neighbourhood. The most recent was a couple of days’ ago, where the residents in the neighbourhood of Acquasanta, in Palermo, took to the streets to stop the opening of a CAS for 80 people that had been entrusted to the cooperative La Fenice. As usual, after the news of the protest came the increasingly violent racist commentary. Comments by people who perhaps will find a carer for their own mother among “the Blacks”, or someone to help with their garden. But this is now unimportant: these are the “good people who are thinking about working, not the ones who come here to take €40 a day and then say they want Wifi too. The neighourhood can’t be safe with all of these nivuri (blacks) around, out children won’t be able to play in the street.” The Prefecture needs the new CAS in order to take the pressure of the hostels for unaccompanied foreign minors, by now full of 18 year olds who, for months now (and in opposition to the new Zampa Law*) have remained in centres of initial reception without any possibility to enter more appropriate parts of the hostel system. Thus once they turn 18 they are transferred to the mountains, with the paradox that at least in the initial reception centres they were near a piazza or some gathering place, only to then find themselves moved far away from the places where, with some difficulty, they had constructed some bonds. And it is exactly this which has provoked protests and problems which give rise to the same dynamics every time: people running away, losing their right to a place in the reception centre, and becoming invisible.

The above comment, made by a middle aged woman, is the result of a racist politics which has been used to create scapegoats, with the consequence that even among the more trodden down section of the population, the nivuri are accepted only if they know their place and make no demands.

The isolated hostels see the same dynamics as those in the cities, with the added problem of a lack of adequate professional staff. The paradox of the new centres in the Madonia mountain range is that they have excuse that no one wants to work there because they are so far away, because its not worth the effort and so they have to make do with a limited number of staff and all the consequences that entails.

Meanwhile the institutions do not give any thought to the wellbeing of those in the hostel system, but simply maintain a form of business which bulldozes human dignity. Last week 34 Nigerian and Pakistani citizens taken by the Prefecture of Syracuse to the San Carlo centre run by Caritas Palermo, which made itself available as an emergency solution for a few days. To the great surprise of the volunteers at Caritas, the migrants did not arrive from a recent landing but instead from a hostel in Rosolini where they had already been for some time, without nevertheless any procedure for documents being initiated. In the minds of the Prefecture of Syracuse, these 34 people were meant for a CAS which was about to open in Palermo, but without having communicated with there colleagues in Palermo to the slightest degree. And here is the paradox: the Prefecture of Syracuse, having understood their “mistake”, sent the staff from the hostel in Rosolini to bring the migrants back. Yet again it was only the mass presence of the police (seven cars and some high ranking officers) that convinced the men to get on the bus which took them back to their seclusion, to the kind of centre which so many Italians still like to think of as a “five star hotel”.

In this depressing context we cannot nevertheless forget that even the procedure for the recognition of international protection is constantly more difficult, both for adults and minors, and that the long waiting times simply mean that the option of running away from the hostels is just around the corner. The statistics speak clearly enough, with spine-shivering figures as far as minors are concerned: the fact that a modern country does not know what has happened to 12,000 unaccompanied foreign minors is a defeat in every way – juridically, socially and politically – but at the end of the day these are minors who simply do not count. These are horrifying numbers which correspond to the closure of Fortress Europe, a Europe that only raises up more walls.

To give an example, in 2016 the Territorial Commision of Trapani provided a negative response to 1,259 of the 2,307 requests for international protection made, and recognised only 17 as deserving refugee status. 463 people could not take the long waiting times and left the centres before a decision arrived from the Commission.

Migrants are increasingly on their own in our cities and train stations, because aside from those who flee bureaucracy, abuse and loneliness in the CAS, there are the Tunisians who continue to leave the police stations with a rejection notice between their hands, only to then sleep rough while awaiting a “lift” towards a murky future, ever at risk of becoming prey to traffickers and exploitation.

They are considered increasingly in the way and dangerous, discriminated against by laws which simply create invisible people. Those who have contacts are exploited to the utmost in the countryside, given that at this time of year the demand is high.

On the other hand there are those who undergo deportation: on October 26th, 40 Tunisians were flown back to Tunisia directly from Lampedusa, the latest instance of a direct deportation without any legal safeguards.

These policies on the one hand help along a political elite in Tunisia who can push for a deal to block and receive back their own citizens on advantageous terms, but at the same time they are waking up civil society, who are denouncing the forced deportations and the conditions of reception for irregular Tunisian migrants, conditions which are neither dignified nor respect their human rights.

And let us not forget that solitude kills.

This too is a crime with which to charge a broken politics.

* Zampa Law = the legge Zampa, an Italian law in force since February 2017 governing the organisation of unaccompanied foreign minors in Italy.

Porta Felice: Exception Or The Rule?

They are being taken for a ride – Part 2

We have lost even the last speck of humanity

They are being taken for a ride – Part 1

Visiting the highly specialized center for unaccompanied minors in Ragusa