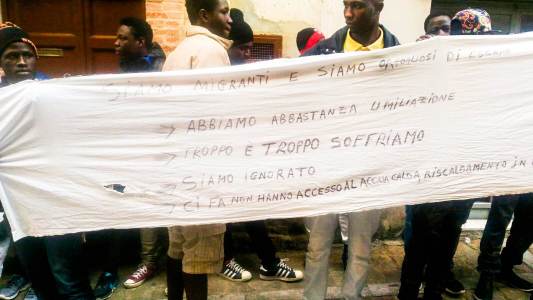 “We’re just following orders, we can’t make an exception, and these animals are liable to do anything. They’re so desperate they don’t have anything to lose. We can’t ask ourselves if it’s right or not, we’re paid to do this. We always see the same faces, they’re so desperate that they come back two or three times, risking their lives. We also here stories that leave us wondering how they do it. If you’re distracted for a moment, they hurt themselves – and like I said, they’re capable of anything. That’s why they call us in, because we’re a specialised team with very old military techniques, and our priority is to save our own skins. When we go into the Hotspots or other centres to get the Tunisians or Egyptians that have to be sent back, it always ends up in a battle, and we have to stop them from really doing some harm (we’ve asked to be given pepper spray they’re testing so that we can have a window of time when they can’t react, so we can work safely). They even throw themselves against the windows of the airport to hurt themselves so that they don’t leave. We’re experts and we’re sure to respect our superior’s orders, and the sooner we do it, the sooner we can go home to our families.”

These are the main points from an informal chat with one of the members of a riot squad that intevenes in centres throughout Sicily, mainly the Hotspots, the largest asylum seeker centre* and the detention centre* when there are deportations to be carried out or riots to be put down. These are normal procedures, while we remain entirely indifferent to the fact that thousands of people are sent back to their countries with violent, coercive methods to calm down the agitated, with handcuffs. Even the National Garantor for persons deprived of freedom maintains that: “the forced deportatons are witness to serious issues around routine procedures that do not always respond to criteria of necessary and proportionate use of force.”

It is normal in Italy to no longer be outraged by everything shameful and inhumane that is taking place: it’s increasingly rare that anyone even raises their voice to report the acts of violence and hatred against the weakest and most vulnerable. Politics utilises so much daily verbal violence that the most unacceptable behaviour has become normal. There are increasingly fewer journalists and newspapers who tell the facts. The system of information imposes its orders and those journalists who refuse to doff their cap are put under pressure and intimidatory threats. This is simply procedure.

Procedure etains people arriving on Lampedusa, especially Tunisians, in horrendous conditions inside a non-functioning centre that stays open thanks to emergencies.

Procedure means not admitting that a section of the Tunisians who arrive on the provincial coasts of Agrigento and Trapani are intercepted and deported after a spell in a Hotspot while, on the other hand, if the number of deportations are above those laid down in the bilateral agreements, they are dumped in the street with a refoulment decree or expulsion order. Thus what determins whether you are sent or home or can stay here to join the ranks of the invisible is simply chaos – or luck, according to your point of view. At the landing at Trapani last week, a young Tunisian man in fear of being deported threw himself off the Aquarius (the vessel of the NGO ‘SOS Méditerranée) as soon as it came into port.

Procedure means that the trafficking on unaccompanied foreign minors is activated by the authorities themselves – the case once one considers that it is now normal for a minor to pass through 4 or 5 centres over a short period of time, often not only in different cities but even different parts of Italy, with their documents being lost between one transfer and another, and appointments with the Territorial Commission skipped. It’s enough to simply note the countless transfers from Calabria to Sicily, and the centres in Sicily who send staff direcly to Calabria to pick up the minors in Calabria in order to not miss out on profit.

Procedure means that how the reponses from the Territorial Commissions are notified by the police changes from city to city. Often there are serious problems relating to a lack of notification. In some cases, the Commissions themselves call the managers of hostels directly in order to inform them of the arrival of a notice in advance, or verify the notification has been made by the police, in order to avoid problems and delays for the asylum seekers themselves.

Procedure means that in a reception sustem with a range of structural shortages and gaps, decrees that evict people from the hostels are often used to eject those who protest or who have made supposedly illegtimate requests. We believe that Italy has seen a sharp increase in the use of these decrees, and in the last two years alone there have been around 22,000: all bodies to be recuperated for exploitation and the creation of black markets in fake hospitality and residence documents.

People protesting against the revocations.

There is no planning here, simply business: but this too is normal procedure.

Deaths, Rejections and Vulnerable Detentions in the Pozzallo Hotspot: The Daily Tragedy of Those Fleeing to Europe

Pala Nebiolo in Messina: Forceful Fingerprinting and Lying to Those in Need of Protection

Lampedusa, 3 October 2013: The Shipwreck of Truth

High specialized reception Centre for minors in Mazara del Vallo: can it really be qualified like this?

Eritreans: placards and slogans on Lampedusa: “We are refugees, not fingerprints”