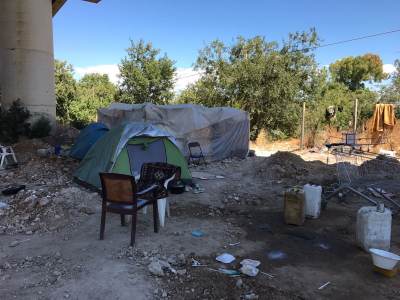 Living conditions are increasingly worse for the migrants living at the informal camp at Pian del Lago. After the last police eviction (26 May 2017) they have been forced to set up their tents in the remaining spaces between the big holes in the earth left by the diggers from Caltambiente. The attempt is of course the continual reconstruction of the tent city, only in a still more difficult situation, one which was already tragic.

When we arrived, together with staff from the Oxfam project OpenEurope, there were a dozen young men present, who told us that there are currently 25 people living there, the majority of them Pakistani, and a dozen Africans.

The situation is truly desperate: while we were talking with some of them, we saw ‘J.’, a young Pakistani man of 31 years, continually cutting himself with a piece of glass on various parts of his body. Seven months ago he was refused from having a place in the asylum seeker centre* in Caltanissetta because he had already been photo-identified in a reception centre in Ravenna. Yet at the same time he does not want to leave the camp here. And so he waits, in vain.

Or there is ‘S.’, a young 23-year-old from Chad, who tells use he is very ill and is simply waiting to go back to his country. The others present, all Pakistani, are all waiting for their permit to stay, after which they will move on towards Milan or Naples.

Yet again it is the slowness of bureaucracy which forces migrants into these precarious and frustrating conditions. Whole months waiting for just a piece of paper which allows them to feel free and independent in building their own lives and futures.

We are facing an increase in extremely vulnerable cases, whose physical and psychological conditions are getting worse every day.

In the context of the recent series of landings in Sicilian ports (over the past five months more than 50,000 people have arrived), we need to ask ourselves how the reception system can avoid collapse. Do we need to wait for more camps like that at Pian del Lago? The threats by the Minister of the Interior, Minniti, to refuse NGO rescue ships entry to Italian ports will certainly not solve the gaps and inefficiencies in the Italian reception system, nor building solidarity on a European level. The entire system needs to be revised, starting from an awareness that the phenomenon of migration is no longer an emergency issue, but something to which we can react with preparedness and strong political and legislative tools.