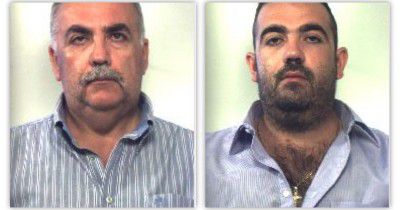 LiveSiciliaCatania – MASCALI. Big business in the migrant reception sector – particularly of unaccompanied foreign minors – is at the centre of an inquiry opened this morning by Operation Camaleonte. On request of the public prosecutor in Catania, an order for cautionary imprisonment has been made for Giovanni Pellizzeri – 56, employee of the provincial health service, former mayoral candidate in the last elections in Mascali – as well as his son, Mario Pellizzeri, 29, and Isabella Vitale, 48, the businessman’s right arm. They are accused of the crimes of corruption, abuse of minors and forgery.

The fact that there was something shadowy behind the cooperative, operating in Mascali and Giarre, emerged through a series of disturbing events. In October 2014, Mario Pellizzeri, along with an employee from Esperanza, a housing community for unaccompanied foreign minors, were involved in an investigation into an attempted murder (later downgraded to serious bodily harm) in relation to one of theThe young Nigerian man told of having been beaten up because he complained about the delay in receiving his permit to stay by the Italian authorities. A few months’ before, the extraordinary commissar at the Bonaventura di Giarre welfare office, Salvatore Iervolini, officially reported to the public prosecutor in Catania some anomalies in the hiring procedures relating to some properties in a building on Via De Gasperi,rented to the cooperative Ambiente e Benessere based in Mascali, traceable to Giovanni Pellizzeri. In 2015 violent fight between migrants at the Via De Gasperi community was recorded on a mobile phone, a community managed by the same cooperative, Ambiente e Benessere of Miscali. The video shows three migrants beating each other with sticks and chairs, without any intervention by the centre’s staff. In the same year, during a surprise visit by the council social workers, the community for minors in Via Paoli in Sant’Alfio, managed by the Miscali cooperative Esperanza – again traceable to Pellizzeri – a seriously concerning hygiene situation was disco But this is not all. Despite the harsh temperatures in the mountain town, the residents were nonetheless without Winter clothing and heavy blankets. The following year the necessary authorisation was removed and the structure was closed down.

From 2014 onwards the Carabinieri from the Giarre battalion at Aliquota Operativa began a series of taps, following the acts of violence within the community, and after reports by Save the Children relating to the serious negligence at the centre. The taps demonstrate the seriousness of the abuse perpetrated against the minors. Giovani Pellizzeri and Isabella Vitale called the young residents “pigs” and “gypsies”. The suspects even demonstrated their disgust when asked for basic necessities such as medicine. “Yes you can have the generic pills, but not these here! Absolutely no! He can spit blood for all I care…!” are come of the comments recorded during the investigations. Furthermore, the young migrants used to walk from Sant’Alfio to Giarre by foot in order to go to school, because the centre did not organise any other means of transport.

Among the ten people under investigation there are also two council employees, one from Catania (now retired) and another from Sant’Alfio, for whom precautionary suspensions have been requested. The investigations suppose that, in exchange for monetary payments, the former sent minors to the cooperatives managed by Pellizzeri refulatly, despite being aware of the serious problems at the centres; he even worked to prevent the community’s closure, even thought deprived of authorisation and other essential conditions for a reception centre. The employee in the technical office in Sant’Alfio, on the other hand, is supposed to have provided a positive report in order to allow authorisation of the centre, basedon clearly false material and opinions.