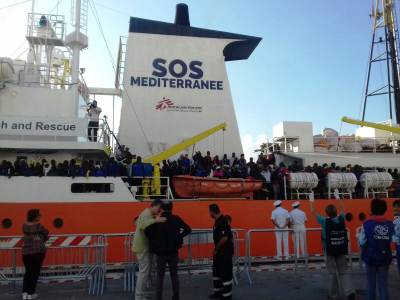 The war on migrants is claiming ever more victims. There is no pause: the victims are increasingly younger, victims of policies arising from Europe’s choice to be ever more closed in on itself. A Europe with a constant syndrome of believing itself to be under siege, rending people’s lives a living hell, as is the case for the 606 people who arrived last Friday in Palermo on border the SOS Mediterranee, a landing baptised by all of the newspapers as the “ship of children.” 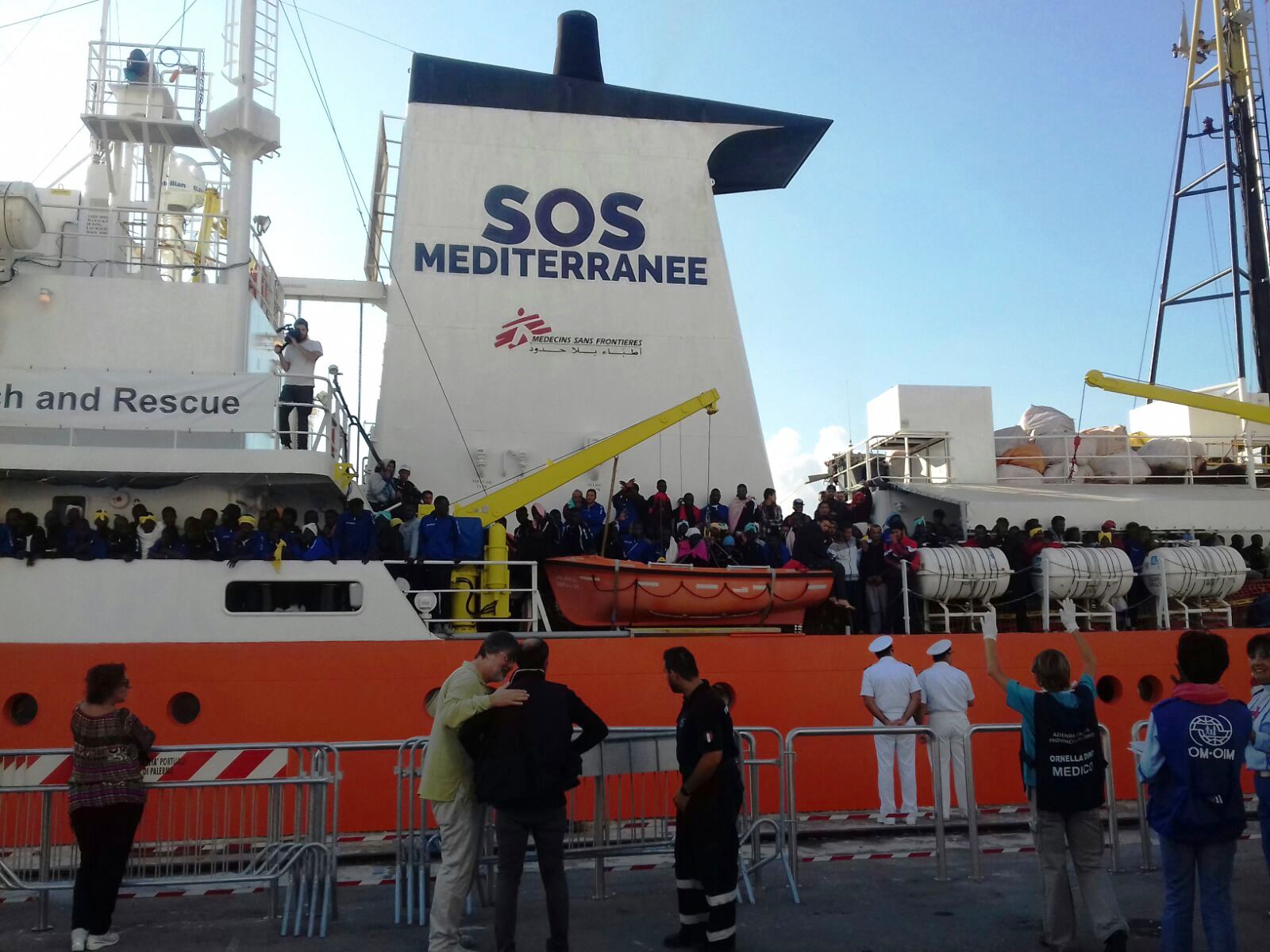 The SOS Mediterranee at the port of Palermo

This is one of the small ships which the NGOs still manage to operate at sea after the slander machine did its work, emptying the Mediterranean out of uncomfortable witnesses who might observe the policies of sending people back to the Libyan hell. The applause of the migrants who were saved and brought to Palermo, as a farewell and thankyou to the crew of the SOS Mediterranee, demonstrates the difference between the mood of those saved by the NGO ships and those who, on the other hand, are rescued by Frontex and military vessels. It is clear that the humanitarian vessels provide a sense of security and tranquility on board to those who have survived trauma and violence, the signs of which you can often see freshly marked upon their bodies.

Activists present at the landing told us of a mass presence of officials and journalists, who provided a moving service, splashing the children’s faces on the front pages without any shame, without any respect for their privacy, their only desire being to sell the news.

It is sufficient simply to take a glance at the headlines, all with the same figures, but without any precision regarding the presence of “unaccompanied foreign minors”, because the phrase would render the title clunky. In the end 114 unaccompanied foreign minors of different nationalities arrived in Palermo, young men and women who have been placed in the reception centres in Palermo and the province, filling up again the structures which till today were in a numerical “free fall”, given that so many unaccompanied foreign minors have turned 18 and been transferred to the Extraordinary Reception Centres* for adults. Thus for many Initial Reception Centres for minors* and a few housing communities, this landing represented a manna from heaven; a good example is the famous Initial Reception Centre for minors Asante, which now has around 180 minors yet again.

A large number of families with children also arrived, who had to undergo a horrific journey. Many of them have lived for some time in Libya after fleeing Syria, Egypt or Eritrea. Many people who used to work in Libya have now decided to emigrate yet again due to the never ending war, and because the militia are completely out of control, meaning that handing themselves over to the network of human traffickers is the only way out. And so they have packed their bags again in search of another destiny, the latest change of destination thanks to blind and murderous policies.

A vast number of those who landed are victims of torture, genital mutilation, machete cuts, beatings, physical and psychological wounds. All of this is quite clearly the result of specifically chosen policies designed for the sake of spectacle alone. And exactly the same happened in Palermo: as soon as the spotlights were off, everything changed. The red carpet is taken away, and the identification procedures start up, without any adequate attention to people’s vulnerability. A young men with serious wounds and a pistol shot to his leg had to wait in the port for hours, because the doctors could not assist him and the police did not allow him priority in the identification procedures. Another young man with a post-traumatic stress syndrome remained for hours in a tent structure without any medical attention. For the umpteenth time, once the landing operation itself is finished everyone packs up their bags and leaves the port – from the Provincial Health Office to the Red Cross, the mediators, the volunteers – leaving the port to the police officers whose only task is the identification procedure: they are not doctors nor humanitarian staff, and they only respond to very specific rules. These are rules that put security concerns above all else, even to the extent of splitting up families, as happened yet again at this landing.

We maintain that the management of the landings in Palermo is better than the more militarised landing operations in other ports, above all due to the presence of third sector organisations. Yet the presence of such organisations needs to be guaranteed after the landing operation as well, up till the final migrant has left the tent structure. Mediators and doctors needs to be there in order to focus on those problems which, hour after hour, simply increase with fatigue, stress and the fear of being yet again being controlled by people who have guns and sticks just like in Libya.

There were many young Libyans at this landing, with luggage in their hands almost like evidence that they had to flee their country. The Libyans had the chance to enter the reception system, while for the Tunisians, Moroccans and Egyptians their future is only a decree of deferred rejection. From Saturday onwards the train station was filled with men and women asking for help about where to sleep, eat and take a shower, and the help comes only from volutary associations, despite the city’s mayor continuing to provide interviews saying that in Palermo no one is a foreigner, that we are all Palermitans. There are also many people at the Palermo train station  who come from other cities, especially Trapani and Agrigento. There are landings there two, above all of Tunisians. The Lampedusa Hotspot is again full with 600 Tunisians, packed into an inadequate structure. 250 people were transferred to the Trapani Hotspot from the Palermo landing, joining the Tunisians who arrived directly on the Sicilian coastline. A young man even arrived in Palermo by walking along the motorway, only to collapse upon arrival.

Palermo too will have its Hotspot, by fitting out one of the city’s barracks, and in a rush, given that the work has been entrusted to company from Rome via the ‘Invitalia’ agency, through which the Ministry of the Interior has agreed all of the contracts for government-run centres. We would like to ask Mayor Orlando if those who currently guarantee the human side of the landings will be able to do so inside a Hotspot? Or is, as is always the case, these will only be political slogans, and Palermo will also be like other cities, militarising and hiding the abuses from indiscreet eyes, hiding the illegal practices which are perpetrated every day at the expense of those who cannot defend themselves.

Confusion reigns supreme in the relocation program as well. Entire families of Syrians need to be transferred to the Extraordinary Reception Centres* but due to a lack of places for families will be divided up. Where war did not manage it, politics will. Unfortunately these people should have left two weeks before, when there was still the chance to be location – a long and complicated procedure, but an option which today is no more.

We met some young men at the station who are living at the centres for minors in Palermo, who emphasise how confusion also reigns among those who have been here for some time, because they receive no support from anyone, other than some worker or other with good will, or a volunteer. The young men advise the new arrivals to go elsewhere “otherwise you’ll end up in some camp in the bush and they’ll abandon you there.” ‘A.’, a 16-year-old from The Gambia continues his rant by turning to us: “My camp is an hour and half from the town if you walk. We stay there the whole day because they never take us out of there. There’s no money for a car for more than a year.”

In the end, it is these young migrants you always pay the cost of this state of confusion, men and women who have been impoverished by an economic system, who either die on the journey or who we disperse across the country, in one way or another turning them into slaves to our greed and, at the same time, slaves to our fears.

The Prefecture of Palermo has published an exploratory notice in search of economic agents interested in participating in the commercial procedures for providing transport tickers for foreign citizens who have been handed expulsion orders, creating the necessary means for sending people back directly from our city. There are all the reasons to believe that the future holds nothing good.

Reception system, the new CAS* scattered between hills and mountains of the province. “Migrants increasingly lonely and isolated: this way they can be blackmailed”