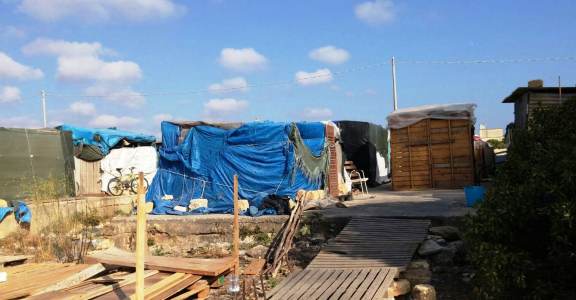 A few weeks after our last visit to Campobello, we returned to see our contacts living in the informal camp at Erbe Bianche. The tent city has grown hugely: more than 400 people now live there, awaiting the imminent commencement of the olive harvest. 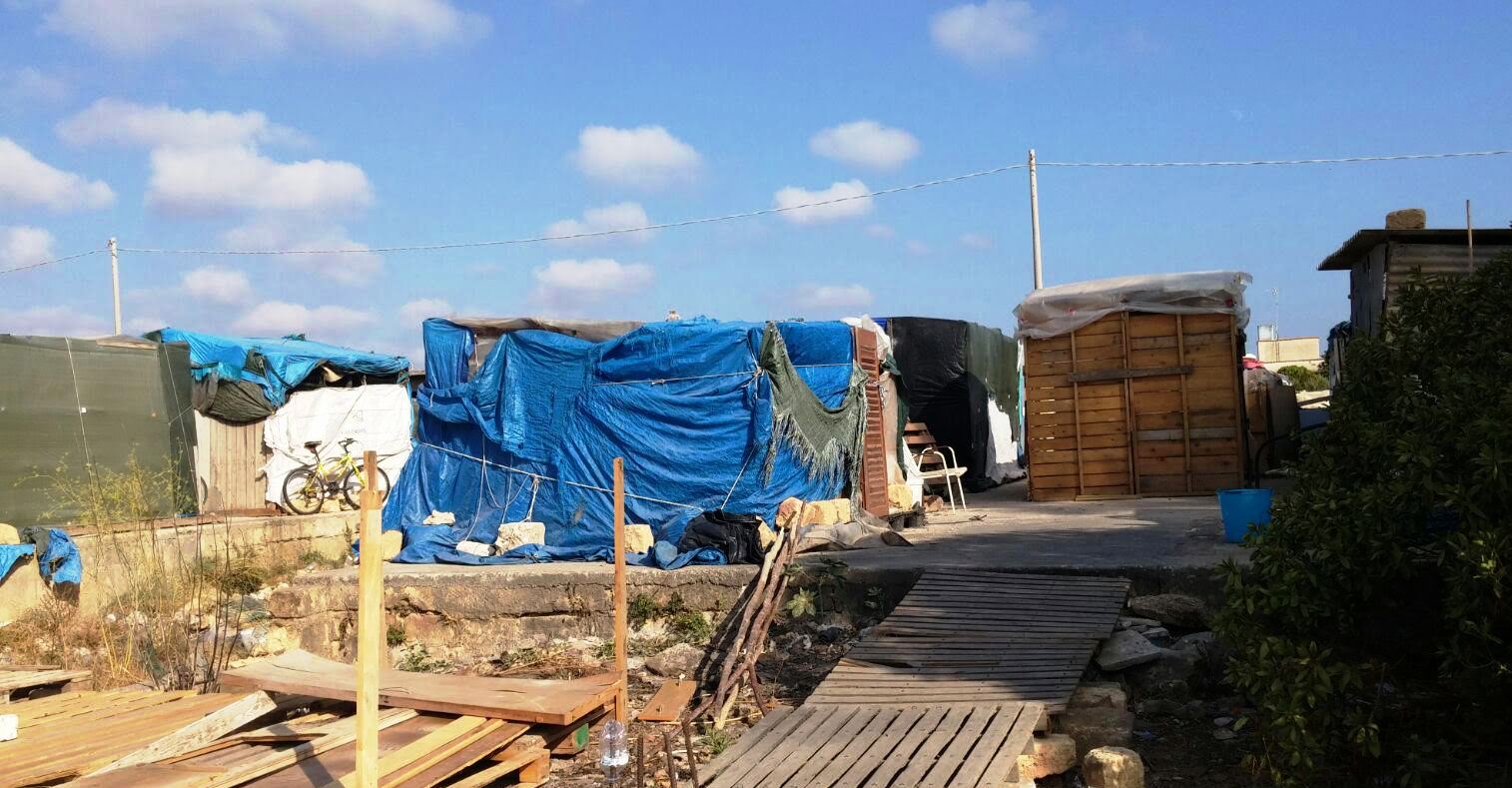 We arrived in the late afternoon, and almost everyone were at the camp site. Many brought plastic bottles with them to fill up with water, which they use for cleaning and washing themselves. Two years’ ago the local council had made a fountain available in order to make life minimally livable on site. “There hasn’t been any water for two days from our only tap, there’s no other water source out here, this is a big problem!” one of the young men tell us. “I tried again to rent a house here in Campobello, even though I knew there wasn’t any point. Either they tell you immediately that the house isn’t available, or they say it costs €500 a month. The truth is they don’t want to rent houses to us because we’re black.”

“When are they going to open the ‘Ciao Ousmane’ camp?” a Tunisian man asks us. “I can’t stay here, I came here a few days ago and you can see how I have to sleep!” He shows us sleeping bag wedged between two shacks. “I can get a bit of rest here, but soon it’ll be too cold and it’ll be really very difficult. I didn’t know Campobello was like this. For instance, if one of us is taken ill, what will we do?” The man has lived in Italy for more than 27 years and lives in Padua. He shows us all his documents, including a driving license issued in Padua and a long-term permit to remain in Italy. “My son tells me every day that he wants to come to Italy. When I showed him the photos of how we’re living here he didn’t want to believe that this is Italy. I might even pack up my things and go back to Padua. Not even the dogs live like this there.” The man is a builder. He has tried to bring his family over to Italy for years, but the conditions laid down for legal reunification continue to represent an insurmountable obstacle. “You have to show them your accounts for the whole of the previous year, and you have to earn a certain amount. Then they come to your home to check how big your house is and if it corresponds to the standards. If you’re 50cm short, they say it’s too small, and make this fact more important than allowing a son to live with his father!” The man is here because he finally wants to make the money necessary to bring his family to Italy. This all simply shows yet again the vast range of reasons that each person ends up at Erbe Bianche, waiting for the olive harvest.

Another statement comes from M, a young Senegalese man who spent two years living and working in Germany. He has had to come back to Italy to renew his permit to stay. He has been waiting for five months now, and does not know till when he will have to wait. And in the end, he had to support himself somehow, and heard people talk about Campobello. “I’m shocked by how we’re living here. No one takes any interest in us, the only good thing is that here, in this camp, we’re all equal.”

“Come in, come in!” T invites us into his home. The young man has managed to build a real little cottage over the last two days. Rugs and coloured blankets render it hospitable, almost elegant. Aside from two beds there are some shelves, a mirror, a small cupboard and some other furniture. “Even if they open the camp after a couple of weeks, the old olive factory, I’m not going there. It wouldn’t make sense. There I would have to sleep on asphalt in a miserable tent I take in with me. Here I have a beautiful home”, T explains to us, smiling.

Unfortunately the situation for many who arrive today is not clear, because even in 2017, at least 15 years since the harvest was first carried out by the “invisible” migrants, there is still no plan for hosting those who work for our comfort, our oil, our food.

Associations continue to pressure the local institutions to find a solution, but at the time of writing, only a few days’ before the harvest begins, the only idea is to make the space around the former olive processing plant (now a centre for asylum seekers and refugees*) available to 250 people.

We continue to ask, without any response, what the solution will be for the others – more than 1,000 people – who will arrive in this marginal zone, where whoever manages to find a tent or an abandoned shack and can sort themselves out, will then be exploited by some olive grower or other, land owners who continue to rejoice in a politics that allows the invisible to be exploited like this. 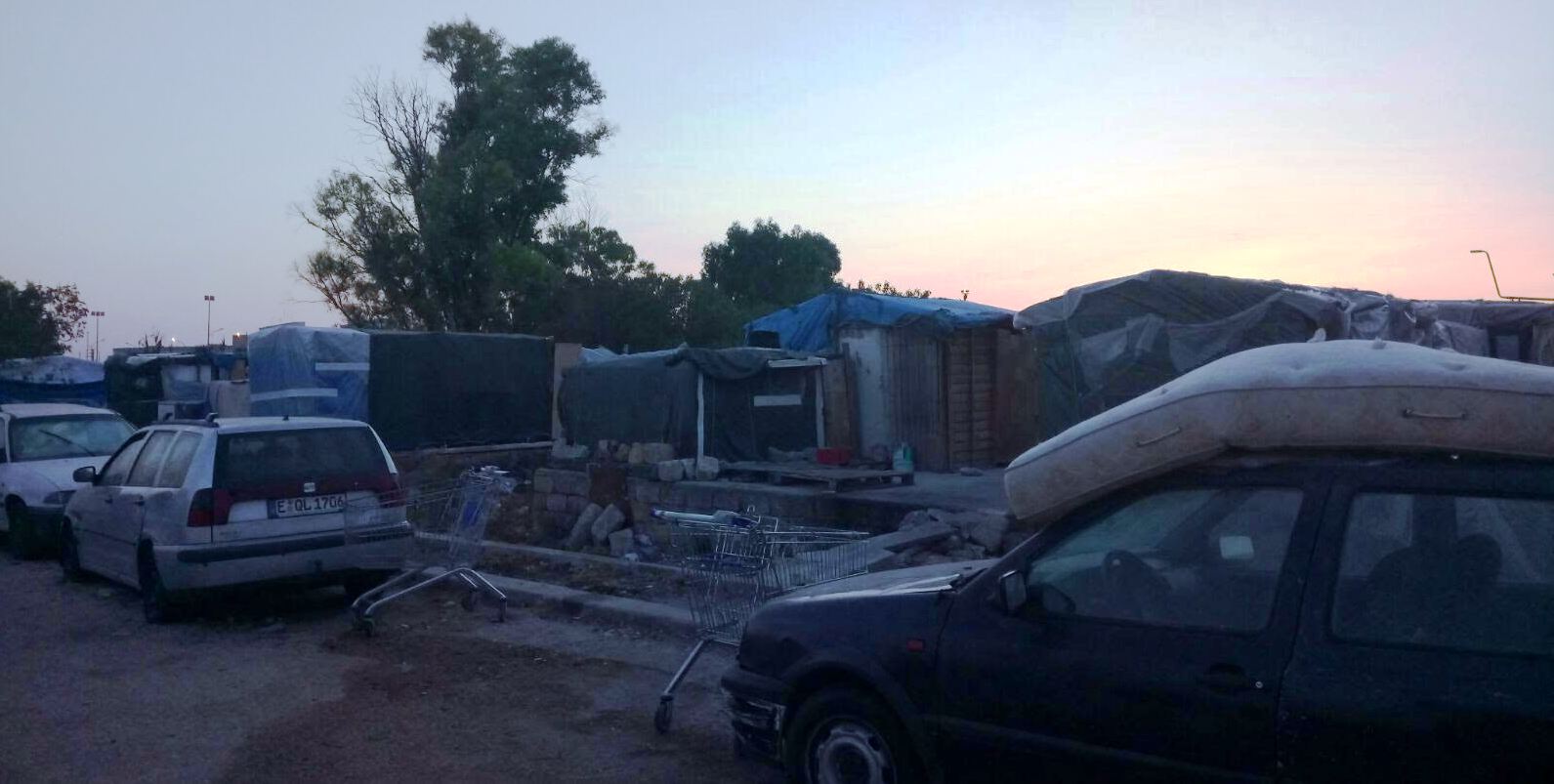 Unfortunately, again this year we will see the conflict between the workers (both adults and minors) who come from the asylum seeker hostels in the area, who will accept a lower wage, given that they have the possibility to eat at the hostels, while those coming from Padua or elsewhere have to ask a higher wage – and thus see their chance to work denied. Across the area we can also, again, see the presence of a large number of young women, mainly Nigerian, who wait on the roads around the camps for the benefit of their exploiters who have redirected them to the area over a period in which the demand has increased.

Some people arrive in Campobello directly from Alcamo, where the grape harvest was carried out from mid August till the end of September. For many of the workers we meet in Campobello, this is simply the next stop on their migrant labour route. Given that Alcamo also has the problem that none of the employers consider it necessary to observe the laws which guarantee housing to their workers, the local council made a gym hall available for the workers to sleep in. They can also eat there in the evenings, and take a shower. For those who want to stay the night their, however, bringing their own sleeping bad to throw over one of the gym mats, has to pay €2 per night, must be in possession of a permit to stay and have a valid work contract. Obviously these conditions exclude a large part of the workers. “You really think that in Alcamo they give you a work contract any more often than here in Campobello?” one of the young men we meet at Erbe Bianche asks us with a bitter smile. The management of the gym hall was given over to the cooperative ‘Badia Grande’, while the Red Cross, Caritas and ANPAS were partners in the project. The money gathered from the workers goes to the managing body and the partnering associations, instead of being invested in improving the hosting conditions.

The gym is far from the where the employers “pick up” their slaves, so whoever stays the night there has to get up extremely early. Over the whole season, only around 55 people decided to sleep in the gym. And the others? Those without documents or contracts? Or simply those without €2 to spend each day? This year yet again, as in previous years, they slept in the piazzas in Alcamo, under cardboard sheets to shield themselves from the cold.

These are people who are useful for our wallets, inasmuch as they allow us to purchase affordable oil, for otherwise the market would need to hike the prices – fortunately there are the “invisible” migrants.

‘B’, a young Gambian man greets us with a sad face. “This is just another stop. Then I’m going to Puglia, if I can manage it, year after year it’s always worse because I’m getting older and I can’t take the conditions like before. But I don’t have a choice.” He accompanies us to our car, emphasising yet again, clearly: “Don’t abandon us, tell people that this situation has been going on for too long.”

A Dog Is Worth More Than A Black