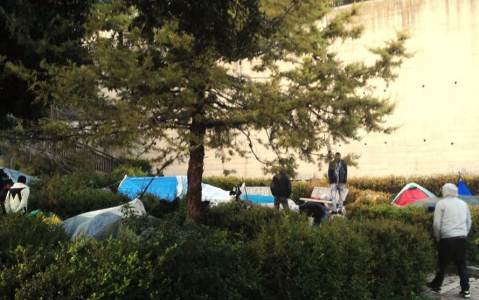 At Campobello di Mazara, a dog can be cured by a vet with the help of €2,000 from the local council, while at the same time, the money apparently cannot be found to guarantee some support – and a little dignity – for the 1,800 migrants who harvest our olives. This sliver of news found while scrolling online once again confirms that migrants are worth less than nothing: we can take away all of their freedom and rights because we see them as animals, less worthy than even cats and dogs.

There are reports of episodes of violence and abuse from across Sicily and beyond: people who are suffer the very worst during the journey from Libya and while in prison there, who are then abused in Italy by a system incapable of welcoming them, one designed instead to make money off the backs of migrants.

We reiterate that when this is also the case for unaccompanied minors, we really have reached the limit. Back when the number of arrivals was at its peak, the institutions explained to us that the difficulties in managing the reception system for minors was due to an insufficient number of places in second level reception and the Extraordinary Reception Centres (CAS*), meaning that people remained in the Primary Reception Centres (CPA*) for 12–18 months rather than the 30 days established by the Zampa law. However, now that the number of arrivals is in free fall, including in relation to minors, the timeframes have not changed because now minors end up being held onto by the managing bodies, who would otherwise be forced to close their doors due to the lack of new arrivals. Neither the local councils nor the Prefectures monitor the situation in order to put an end to this gross business enacted to the detriment of the very smallest.

From anonymous accounts which have arrived to our editors, we can say that this really is a business run for profit: some cooperatives ask for €100 per minor from the second level reception centres in order to organise a transfer. All of this is done with the blessing of the Regional government, which continues to indiscriminately authorise the opening of centres. Faced with situations such as this, often local social services cannot cope, or simply do not want to know. Sometimes this is even through fear of repercussions from the cooepratives, especially in the smaller provincial towns.

But there are also those who, as is the case with North Africans, have to become invisible simply to set foot in Italy. On Lampedusa, the migrants leave the Hotspot and hide themselves across the island. In attempting to arriva at Porto Empedocle, they have been hiding themselves in vans and other vehicles, hoping to disappear for a few days and that they will then be forgotten about. But in order to get off the island of Lampedusa they have to be either accompanied by the police, or put in a plane set for Tunisia.

For the Tunisians who do, on the other hand, get lucky and are not deported, often they are taken to the detention centre* in Caltanissetta, which was set on fire by some Tunisians recently in protest against their deportation.

Deportation means social and familial failure, leading to further isolation and the loss of one’s future. This is why people try to remain invisible in Italy in any way possible, perhaps living worse than a dog or cat in Campobello and elsewhere.

It is only by chance that we have come to know about other informal camps scattered across the area where the olive harvest takes place, such as Caltabellotta, a village of 3,000 inhabitants around 1,000m above sea level in the Province of Agrigento.

The situation there is perhaps even more dramatic than that of Campobello, not for the number of people present but because the informal camp has existed for around four years in an abandoned playground/car park on the edges of the village, in the cold.

The village appears not to even see the migrants, almost all of whom are adult men, with the occasional unaccompanied minor as well. In Caltabellotta there is not the same quantitu of olives as in other parts, meaning that some people leave as soon as they see the lack of work. There who remain sleep in ramshackle tents made from plastic sheets, cardboard and blankets attached between the trees of the small park. There is no water point nor electricity source. The workers go to take water from the petrol station. Until a month ago the nights were lit up by the council street lights, but this has now been switched off, avoiding the fear of seeing the ghosts.

In order to try and warm themselves up, the workers light fires, but they do not have enough wood to heat up the water, so they wash in ice-cold water. During the day the wind or rain makes the tents fly away or tear apart, and people are forced to remain drenched for entire nights.

Such a situation is, quite clearly, unlivable for anyone who falls ill easily: one middle-aged man was taken to hospital for an urgent operation at Sciacca, but after 10 days of admission he was discharged and retirned to his flapping tent.

Many of those present do not have a permit to stay in Italy: some of them have not managed to renew theirs because they no longer have a work contract. The only shops in Caltabellotta open in the same hours that the North Africans work (12 hours a day) and the prices are prohibitively high for people who earn €40/day. There is no interaction with the people of Caltabellotta other than those who own a shop or a piece of land. The paradox is that it is the residents who earn twice over, often unawares, through exploiting the workers. One time over because they pay less than they should, and a second time because the earnings end up returning to the village through the sale of food and attempts to warm up. One coffee barman explained that the only months in which he works and earns something are the three months when the invisible seasonal workers are there, and perhaps this is the reason he is the only person who offers the men the chance to charge their phones, setting up a multiplug in the bar. In the end, we want them like this, people who are rendered invisible and available to do anything, people who make the economy turn in a village by now abanonded by young people, living off the backs of the impoverished, an emblem of how the capitalist economic system functions.

The migrants present in Caltabellotta have many needs, above all heavy clothes and blankets to protect themselves from the cold: the only people who have supported them are activists from Palermo and the team from Doctors Without Borders (MSF).

Both great and small have lost hop, and even continue to lose their dignity, as “K” explained to us without shame, a Moroccan man who has not had the courage to go to the toilet for several nights due to the cold weather, “and in the end I wet myself.”

We also meet “A”, a 60-year-old Moroccan man who, after 15 years as a street vendor in Palermo, could not pay his taxes any longer and lost his permit to stay. In order to keep supporting his family in Morocco, he has had to take up “a dog’s life” here in Sicily.

Other younger men were rejected by the police as soon as they arrived – and were also rejected by society, they tell us. They tell us that even as the “Speranza and Carità” dormitory in Palermo they were not looked on with favour due to being Tunisians, and the Black African majority excluded them. They preferred to skleep in the street or on abandoned trains, and now they are allowing themselves to be exploited simply in order to stay out of criminal circuits. “If we wanted to live like that we would have stayed in our country, we wouldn’t risk death to come and steal in Italy.”

Like so many others, they have by now finished to harvest olives in Caltabellotta, and so are preparing for the next stop: they will come down from the cold of the mountains and find a less cold area, probably for the orange harvest, the most famous being in Ribera. Another circuit, another road to exploitation.

In Libya there people earn by selling migrants, but the business is no joke in Italy either. Truly we need to stiop and ask ourselves at what point we have come to when a migrant, a human being, is worth less than a cat or dog.

Our Constitution Buried In Depths of the Mediterranean

The Border Returns to Lampedusa

Crossing the ocean at age 12. Hundreds of minors have reached the Sicilian coast

Two boats with 226 refugees aboard rescued in the Sicilian Channel