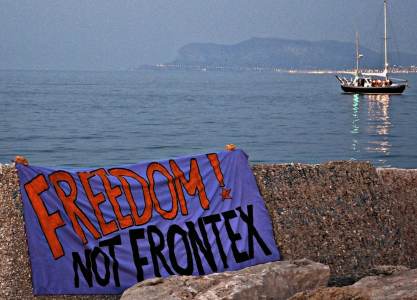 “The suffering of migrants detained in Libya is an offence to the conscience of humanity”. These are not the words of an activist, but of a representatibe to the UN High Commission for Human Rights.

What is taking place in Libya is that the unimaginable has become normal daily violence. In a clearly criminal approach, Italy and Europe continue to sign deals, include with people traffickers, to stop at any cost those who want to come to Europe, people who merely want to life a decent life. Decisions are left in the hands of a small and violent elite who control and are conditioning the lives of millions of people through policies and deals that decide if a country is good or evil, if a migrant is worthy enough to ask international protection of if they ought be considered a foreign body – and in this case, apparently they are worthy of being violated, tortured and abused in Libya and in Europe too.

In 2016 and 2017 a vast number of unaccompanied minors lost their lives in the desert or at sea. All of those who faced the journey, even though minors, went through the same attrocities that adults face during their transit through Libya, only to then arrive in Europe to become the slaves in our fields and on our streets. They represent a small army of the invisible, wandering in search of a goal, pausing at all the pit stops of exploitation. Out of the 18,500 unaccompanied minors who arrived in 2017, more than 5,500 volontarily left the centre in which they had been placed. The percentage of absences has increased over the last few months in the context of a large number of young Tunisians who fear being deported and run away at the first chance they get – an action which coul in all likelihood be avoided if clear legal information were provided.

The most recent figures on minors are shameful and yet again demonstrate a high percentage of people who have left no trace and who will no doubt have fallen into the hands of traffickers and others who would exploit them, people taking pleasure in the inhumane policies and illegal practices enacted by a range of institutions.

The failed regional policies regarding the reception and hosting of minors has unfolded in this context. The Sicilian regional government continues to sign off authorisations for the opening of first and second level reception centres without have any real awareness of the context in which they function. There are towns with an extremely high number of minors but without basic services such as schools, health services and social services. It is simply enough that proposal includes an available building – even if lost in the mountains – and the authorisation is given.

For some time now we have noted the problem of the very high number of first and second level reception centres that continue to open, despite the fall in the number of arrivals. The result is that many centres have a large number of places available thus, in order to keep the money coming in, the minors are not transferred elsewhere, blocking the realisation of their educational projects. Despite this problem being made clear in the relevant offices, no solution has yet been found. The ones who pay, of course, are the minors themselves, who lose hope and from whom we subtract that iota of humanity which they had kept hold off after passing through the Libyan hell.

On the other hand, there are those instances of hostels forced to close because the institutions fail to pay on time. To provide just one example, the Prefecture of Palermo has blocked patyments since January 2017. Over the past few days some hostels for minors have surrendered, with the very real risk that their residents will continue their stay in the city under a bridge or the arches of the train station. And of course people run away from these situations as well, looking for a future only to then find themselves in tent city or an abandoned shack, begging for a living.

As far as the 18 year olds are concerned, those who have a form of protection but for whom the centre has not managed to create a road to independence before they leave, the only option remaining is the street.

When we monitor centres, we frequently meet staff who are unaware of what exactly their tasks are, working on contracts deprived of any protection, who are underpaid and exploited in their turn. Workers who were taken on as mentors, but find themselves doing a range of entirely different tasks.

These are frequently recent graduates who the cooperatives can work to the bone, young people from whom we are removing the passion for their work and their future, and who are then forced to leave in order to not end up in therapy due to the stress they are placed under by their employers. These dynamics are well known to the institutions, trade unions and humanitarian organisations who have the chance to interact with both migrants and the staff, but are then undermined in order to support what is, for a few, the flourishing migration industry.

Finally, we critically report that, in the Extraordinary Reception Centres (CAS*) opened in the provinces of Agrigento and Palermo over recent months, the residents are abandoned in isolated structures far from inhabited centres, while the bureaucratic processes remain on pauise and legal information fails to be provided. We have been informed about problems in accessing basic services and lack of clothes. These are lacunae that often a caring member of staff will try and fix by bringing the residents to the organisations in Palermo that hand out clothes, such as Centro Astalli, and even accompanying them to the Caritas soup kitchen to eat, given the extremely low quality of the food provided in the centres.

The inhumanity of these politices is clear for the migrants too, who have to live through the daily consequences. The question put to a friend by one of the “invisible” Tunisians says everything about their awareness of the injustice of such a system: “Why can your pensioners and businessmen come to our country, but we are turned away from yours? Aren’t we just like your young people who are leaving Italy in their hundreds of thousands? Aren’t they also economic migrants?”

Landings at Agrigento and Palermo: “Where is my husband? Please help me!”

Prejudgment instead of due process: The case of Medhanie Berhe