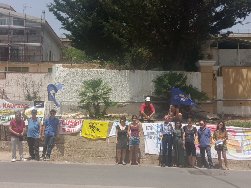 The situation continues to worsen for the people imprisoned at the Pian del Lago Detention and Repatriation Center (CPR*) in Caltanissetta. After the reports of beatings and lack of assistance received in recent weeks by the activist network, yesterday, on June 30, 2022, the parliamentarian Simona Suriano went for an inspection visit to the center.

While the parliamentarian was carrying out the inspection, accompanied by her assistant, a solidarity demonstration was held outside the CPR – announced in the previous days – calling for the definitive closure of the CPR.

After the visit, the parliamentarian reported to the demonstration the bad internal situation, the serious health problems encountered, and the presence of people detained with important vulnerabilities. Furthermore, because of the negligence on the part of the operators of the center, there have been several attempts at self-harm by the detainees.

Yesterday afternoon, confirming the serious situation, a new protest arose from the detainees asking for health care for a Tunisian citizen with important kidney problems who had been detained in the CPR for months. Once again, the police responded with violence: they entered the facility and beat two inmates, one of whom was the person who needed medical assistance for kidney problems. A very serious attack, yet another: in recent days from the CPR there had already been reports of police violence against a Tunisian citizen.

We ask for the closure of the CPR because it is a place of unjust detention where rights are denied and where violence against people continues to be the only response to legitimate requests – for health, psychological and legal assistance – expressed by the detainees.

As activists and solidarians, we demand immediate care for the claimants and the release of all those detained.

Translated from Italian by Alexandra Obermüller 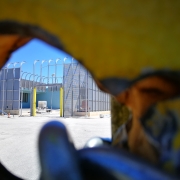 Against illegal and inhuman detentions. We say no to CPR*

The life of 18-year-olds* in eastern Sicily