Via Meridionews – The ship of Doctors Without Borders
that was moored at the harbor of Augusta today saved 300 migrants and brought
one body. It is the body of a fifteen-year-old Somali boy. When he was found
with the other refugees in the Sicilian canal two days ago, his condition was
severe but not critical. Aboard, he was treated immediately by the NGO’s
paramedics and seemed to respond well to the treatment. Yesterday, however, he
died of heart failure.

According to the staff of Doctors Without Borders, the fifteen-year-old
suffered from a chronic illness but was nevertheless forced to do hard manual
labor in Libya. He was left without food or water for days, beaten up and
abused. Some witnesses who arrived in Augusta today verified these facts. When
he went on board of the Dignity, he already had trouble walking. His physical
condition, however, did not seem critical enough to the doctors to legitimize a
direct transportation to Sicily by helicopter. Yet, this emergency means of
transportation was also used during the rescue operation to pick up two people
the ship of Doctors Without Borders. The boy, in contrast, responded well to
the drugs he received in the first hours. Then, suddenly his condition worsened
and eventually he died from heart failure. “Unfortunately, this is no isolated
case” said Giovanna di Benedetto, speaker of Save The Children, “in the last
couple of months, we heard the stories of many minors and all of them told us
of horrible living conditions in Libyan prisons or other places, where migrants
are cooped by human traffickers before they are embarked. The minors and women
of all people are those who suffer the most from the abuse because they are the
weakest and most vulnerable.”

Throughout the
day, two speedboats of the Lampedusa coast guard saved another 120 migrants.
They were on a dinghy that was found 40 miles north of the Libyan coast: Among
them were two children and 47 women, five of them pregnant. This operation,
which was conducted according to Frontex guidelines, was coordinated by the
command center of the coast guard in Rome in cooperation with the ministry of
infrastructure and transport. 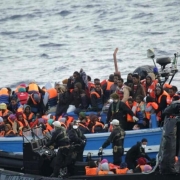 In prison for two years for human trafficking: In fact, they were just migrants in search of a better life

No One Is Meant To Know