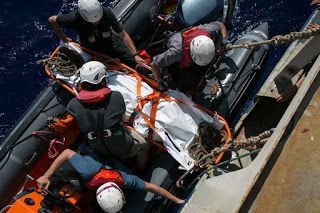 We learn of an
attack by the Libyan coastguard on a dinghy loaded with migrants
during a rescue operation by the crew of the Sea-Watch 2. The
following is their press
release.

During one of the
rescue operations carried out today, the actions of a motorboat
apparently belonging to the Libyan coastguard caused multiple deaths
in the central Mediterranean, 14 miles from Libya. While we were
providing first aid to a dinghy with around 150 migrants on board, a
Libyan coastguard vessel arrived and began attacking them, boarding
the dinghy and beating its passengers with clubs. Our two motorboats
were also violently threatened, preventing our crew from providing
lifejackets and medical assistance to those in need.

The violent
actions of the Libyan coastguard caused panic aboard the struggling
dinghy, and one of its air chambers collapsed causing most of those
on board to fall into the sea. Our crew immediately tried to save as
many people as possible, but for some there was nothing we could do.
Four bodies were brought aboard the Sea-Watch 2. Another four people
are unconscious and receiving medical treatment. 120 migrants should have been brought to safety on board our ship.

This latest episode by supposed Libyan forces not only endangered the crew of volunteer rescue workers, it caused the deaths of many migrants. At the present time it is unclear why the Libyan coastguard may have undertaken this course of action. Sea-Watch requests an immediate and detailed solution to this violation of humanitarian law.

The crew of the Sea-Watch 2 is currently working to rescue several migrant vessels in difficulty. All personnel are working at maximum capacity.

The Mare Jonio arrives in Palermo

Refugees at a Distance: New Victims Amid the Complete Silence of Fortress Europe