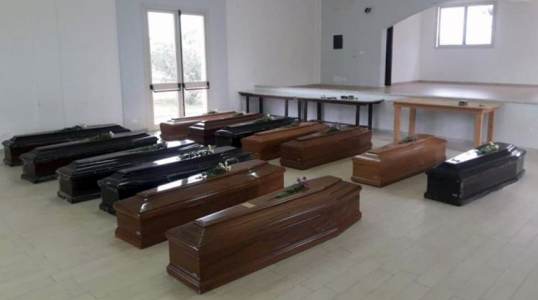 Redattoresociale.it – Memorial service for recovered victims on Lampedusa: 13 women, among them a twelve-year old girl. Search for missing people continues under difficult circumstances. Mediterranean Hope: “Lampedusa is again counting the deaths alone; general indifference.” Sea Watch: “Terrible that no one feels the duty to come here.”

ROME – The youngest of the identified people is only twelve years old, but there is also a ten-month old girl and a two-year old toddler that are still missed. Tonight the thirteen women are buried whose bodies were recovered after the shipwreck happening Sunday night at the coast of Lampedusa. While the aggravated meteorological conditions on sea make the search for the missing more difficult, the priest of Lampedusa, Don Carmelo La Magra, will hold the funerals in the “Casa della Fraternità” according to “the request of the survivors and the explicit wish of the congregation.”

At the same time, the first shocking reports of survivors surfaced. One of them tells that he was able to draw a baby close to him but when he was jostled by a drowning person he lost the child and saw it disappear in the waves. The number of the missing is uncertain: The 22 survivors have given differing accounts regarding the number of migrants on board – some spoke of 55, others of 60, yet other ones of even 70 people.

“At this point we are continuing the search from air; the sea is too stormy currently so that ships cannot leave the harbor. We are supporting the survivors, we have accompanied them to the identification, a harrowing moment. The relatives of the victim have tried to recognize the faces of their loved ones but not all of them were able to look at the bodies,” tells Alberto Mallardo of Mediterranean Hope, who has been living and working on the island for seven years. “The most shocking thing to us is that the shipwreck took place only days after October 3rd. Every year institutions meet on Lampedusa on this day, to promise to each other that the tragedies on sea should never again repeat themselves. Yet not two days later we have to count coffins again at the docks of Favaloro. The silence of the institutions is harrowing as well – Lampedusa is again left alone counting the dead, while the rest of the world looks away in indifference. Although these shipwrecks are happening only a few miles from here. For months and years people have been dying in the central Mediterranean, because the rescue missions, be they private or ordered by the state, are hampered and impeded by all means necessary. In these six years [since the tragic shipwreck of October 3rd, 2013; translator’s note] nothing has happened: there is still no safe passage and many people are losing their lives.”

The speaker of Sea Watch Giorgia Linardi also laments the absence of the institutions on Lampedusa: “It is absurd that no one felt the duty to come here and to commemorate the victims. Lying here are the dead bodies of thirteen women. We are here, as is law enforcement, the rescuer and all those, who have helped to recover the other missing people over the last days,” tells Linardo to Redattore sociale. “During the tragedy of Trieste [in the beginning of October, two officers were shot in a police station in Trieste; translator’s note] the institutions were moving immediately, but no one showed up here. Depending on the disaster, there are different protocols. All of this is even more incredible given that just during the last days the European ministers of the interior are meeting in Luxemburg to speak about this topic.” The NGOs have put forth an alternative draft for the Malta agreement, which codifies standards for maritime search and rescue and the distribution of migrants. “Our monitoring activities show day after day that generally it is being acted too late: it is paradoxical that the Mediterranean which is the most militarized body of water in the world cannot provide enough emergency workers. Law enforcement have enough means available and it is policy to prevent the presence of bigger ships at the coast of Lampedusa. In this context, the dying on sea continues and there is almost nothing that can be done about it.”

SOS from boat, migrants rescued in the Sicilian Channel

Lampedusa: Khalid Must be Transferred. The words of his Lawyers