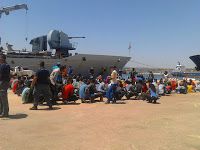 During the morning of the 29th July 453 migrants arrived in Messina along with the 14 bodies of those who did not survive the crossing. The first thing which those on the scene spoke of was the “the strong smell of death” . The fact that it could even be smelt from the sidelines offers an idea of just how dramatic the conditions aboard must have been throughout the journey.
It appears that the migrants used all available drinking water to make the motor work for as long as possible. Yet the lack of liquid for the hours that followed proved fatal for some, who didn’t make it. These few hours and few miles that were so definitive, along with a further 14 dead bodies have, nonetheless, left Europe unmoved. Europe continues to speak only about emergency and to think about the best way to militarise the Mediterranean in order to catch traffickers. Those present on the quayside included the institutional and religious authorities, Praesidium employees, an MSF (doctors without borders) team ready to carry out their new project of psychological support, the Red Cross and the S. Egido Community. Some of the migrants were transferred to the north of Italy, whilst others were sent to communal structures in Pala Nebiolo and the former service headquarters Bisconti- with the hope but not the certainty, that those who survived the crossing can at least go through a dignified reception process. Who knows?

The following day, the Spica, an Italian Marine Military ship involved in the Triton mission arrived in Augusta with 523 migrants aboard. The refugees, the majority of whom were Eritreans, were made to disembark very slowly from the boat. Awaiting them, in addition to the police, were also employees from Praesidium, the Red Cross, the Civil Protection, Emergency and MSF, and most strikingly a significant number of men from Frontex. The first group of migrants off the boat were mainly women and children but also included some young Eritrean men who could barely walk. They passed through the quarantine area where they were photographed and underwent another quick medical check to then be put altogether, sat in the sun to wait to be moved to the refugee camp erected in the port.

There they were accommodated by members of Praesidium and people from the Prefecture, but mainly it was members of Frontex who we saw approaching them and questioning them. The questioning continued right up until the refugees arrived, on foot, to the first tents. There, at least they were able to find camp beds and some shade from the day’s suffocating heat. As had already occurred on previous occasions, albeit few, the police asked us to stay away from the tents and to wait for the identification process to be completed before speaking to the migrants. After several hours and various attempts to exchange a few words with those who had already been identified, I received permission to have access to the tent where the Commissioner was based. He took my details and asked me to respect “the migrants’ private spaces”, in other words to call them out of the tent to speak to them. It’s a shame then that the migrants are not allowed outside of the tent as the police posted at the entrance to the tent reminded them continuously. The only possibility to talk to them was by going up to the edge of the tent. “Where are we? Is it far to Rome?” were the first questions posed by the migrants. Dozens and dozens of young men lay on camp beds or were crouched on the floor, most of them from Eritrea. They finished the lunch they had been given in two minutes flat. “It’s 25 days since I last ate so well,” said C. “A sandwich and an apple- a luxury for me. The journey was difficult, but not too bad. It was nothing compared to the five years I spent in Sudan and the last month in Lybia, where I constantly lived in fear.” Fear was the predominant common sentiment amongst the migrants we spoke to: “Most of us don’t actually want to stay in Italy. We have friends and relatives in the north of Europe. For this reason we are afraid that the Italian police will force us to have our fingerprints taken,” said J., who like many of the other Eritreans I met knew some Italian. “I want to go to Rome, I have an uncle there. And Rome is like Asmara, the city where I was born, because you Italians were in Asmara for a long time, it’s just that no one ever speaks about it.” J. managed to attend school with great difficulty for a couple of years. He speaks five languages and would like to become a journalist, “In Eritrea you cannot speak freely, let alone write freely.”

The conversation however always returns to the subject of fear and the consequences of being identified, “If one decides to stay in Italy, how many years does it take to get a document? It’s a big problem for me. On the one hand maybe I’d like to have a place to sleep, on the other I’d risk staying here, trapped in the system for years and then what? Those who arrived before me say that in Italy there is only Emergency, there is no future for refugees. And I am young and my journey has already been too long, I want to start living like a normal person.” Many migrants started coming over, each one with their own story to tell and their own requests. You would have to stay there for hours to hear all the stories of those who all too often lose even the right to be listened to, as a result of the sheer number of those in the same position as themselves.

There are hundreds of young men and women, like the other 241 who arrived in the afternoon of Thursday 30 July in the port of Pozzallo and were later transferred to the nearby CSPA*. The news of their arrival appeared in the press alongside news of the arrest of the assumed traffickers as happens almost every time. “Migrants and horror”, “Migrant Emergency” “New Emergency”, these are the typical headlines we are used to seeing, with the aim of them being transferred into the conversations of the general public. The media hypocrisy and mystification continues therefore. Fortunately, however, there are some who strive to expose it, I spoke to someone working at the port “they still say it is an emergency, but here no one is dying. It all depends on what the interests of those at the top are.”

Porto Empedocle and Lampedusa: The Final Result is indiscrimination