It seems
that the postal workers, when collaborating with the Ministry of the
Interior in relation to the “envelope” containing news of foreign
nationals’ leave to remain, see themselves as sheriffs. The directors
of the local post office branches, again in virtue of this agreement,
see themselves in turn as members of the government, with delegated
powers relating to immigration.

The
facts: a foreign national makes a request for the issuing of leave to
remain for family reasons. The kind of permit is regulated through
the mechanism of the ‘envelope’ which is, alas, sent via the Italian
postal service. As written above, here we are dealing with the
issuing, not renewing, of a permit. This means that the woman in
question lacks the analogous previous documentation. Consequentially
the postal workers at Piazza Roma (the only branch in Caltanissetta
to which this important work is assigned), refuse to accept the
envelope insofar as the woman
is missing a document. They are notified (in writing) that as she is
dealing with a first issuing it is clear that there is no preceding
document. Nevertheless, the postal workers are resolute in their
decision. The woman
and her child then attempt to avail themselves of more sympathetic
postal workers, with no success. They are as intransigent as stone.
She now asks only that they put the refusal to accept the envelope in
writing, so that she does not become – for the umpteenth time –
a ping pong ball volleying between Pian del Lago and Piazza Roma, but
still nothing. The attitude of the director of the branch resembles
that of Alberto Sordi in the The Marquis
of Grillo.
But not carried off so well.

And here
the director’s intelligence makes an appearance, our delegate for
immigration: the woman ought go to Pian del Lago, make them give her
a permit for three months, and return to present the envelope. As we
are no newcomers to matters of immigration, we ask if the woman must
come up with a reason for requesting asylum in order to receive a
functioning notice of leave to remain at the presentation of the
envelope. The director extends his arms. That’s not his problem. He
sends us away rudely. We call the 113 (the police hotline). They
forward us to 112 (the local police), who are responsible for the
area.

The
telephone operator tries to find a solution, to his credit. We
quietly note that perhaps a car could be sent to check if there have
been any omissions or abuses of approach. He calmly responds that the
logic of the reasoning is spotless. But in Italy logic is completely
out of the question, which means everything is fine.

The moral
of the story: the woman and her child will make the umpteenth trip to
Pian del Lago, where very likely they will be told, again for the
umpteenth time, that they have to present the envelope to the post
office.

For the
umpteenth time a call to an emergency number could have been avoided
over a cup of coffee, in the Sicilian way. And we’re lucky not to
have been invited, as has
happened in the past, to make use of a private investigator. But only
because, this time around, it wasn’t necessary as everything took
place in the light of day.

Peoples’ Court To Be Held in Palermo. The Accusation: Crimes Against Migrants By the Italian Government and the EU 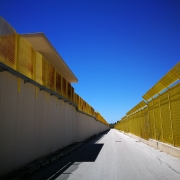 Chronicles of a serious law infringement in the Hotspot of Lampedusa