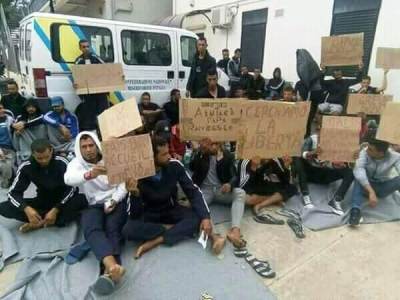 The Italian government has always used the most beautiful island in the Mediterranean as a place to experiment with immigration policies. And the Lampedusans have always been treated as guinea pigs by different governments over the years in order to see how much can be tolerated.

And Lampedusa, a symbol of the immigration issue, has always been used by Italy to put pressure on Europe. After six years, the sewn-together lips of the Tunisians have returned, protesting against the illegal practices adopted on the island and, more generally, to demand their freedom and everyone’s fundamental human rights. These are people who, in contrast to every international convention, are virtually treated as people without rights, criminals to be sent back or exploited.

Over the past few days, more than 500 people have been held at the impractical, undignified, shameful Hotspot on Lampedusa, almost all of them Tunisian. The migrants decided to protest against the conditions in the centre, the detention to which they are subjected and the concrete rusk of being sent back to sender, as has happened last month with planes leaving directly from Lampedusa, or via Palermo, for Tunisia.

This has been an hard hitting but peaceful protest organised by at least 63 Tunisians who have continued for several days:

“We are undertaking this hunger strike to defend our right to free movement and against forced deportation from a place which they call a refuge but is, in truth, a prison. Neither hunger nor thirst, nausea, sickness nor other hardships can pain us as much as the complicit silence regarding the violation of our right to free movement, unjust policies and being criminalised thanks to their laws. We will continue our hunger strike despite the difficult health conditions of some other hunger strikers who have been taken to hospital. This is a cry against those who fight us with injustice, who have forgotten us, those who pushed us into taking ships of death and those who violate international conventions. We are the victims of global economic and social politics. We are the victims of unjust migration politics. We thank everyone who has supported us and remains by our side. No to forced deportations. No to expulsions on the basis of nationality. Yes to the freedom of movement.”

These are the words of the appeal launched by the protesters on October 31st.

These young men have a very clear idea of what is happening, and are aware of being the sacrificial victims in a system which has lots its humanity and continues to murder. There are many, far too many victims created by homicidal European policies. The numbers of victims in the recent tragedies at sea are far too high – men, women and children in search of freedom.

Those who arrived at Lampedusa on the night of October 3rd, even those who were on their last legs, had survived the latest massacre. There were 29. Twenty-nine people traumatised and inconsolable, who told of at least 100 traveling companions who had drowned during the crossing, and of the 12 bodies that had been recovered. A count without end, death upon death lying on the consciences of politicians who perpetrate strategies of closing the borders via deals made with traffickers for purely economic ends.

Those who arrive are closed in the Hotspot, and if you are Tunisian no one listens to you, no one tells you about your rights. You simply have to wait your turna dn hope that in that moment there will be no plane ready to deport you. And if you are lucky, you will be transferred to Porto Empedocle with a rejection notice, and dumped on the street and join the growing ranks of the irregulars.

This is the destiny which was met by those Tunisians who had protested in Lampedusa recently, and who since Saturday have been abandoned in the street with a rejection notice in their hands. They are now destined to live in the shadows, and after the hunger strike this represents a perfect place to be killed by hunger and the cold. “They shouldn’t really have come here. They’re lucky that we didn’t send them back, and now they’ll settle down and realise that they shouldn’t have ever come.” These are the words of a police agent in replying to our question about these inhumane decrees, a response echoes by the stagnancy of humanitarian organisations who do nothing to support these people. Instead, they too remain complicit with unjust Italian government agreements. But what truly leaves us disturbed is the deafening silence from the church and civil society in Agrigento, who do not life a finger, with the simple justification of “but they’re Tunisians.”

Some activists on the island continue to strive for a world with greater justice and solidarity, and continue onwards, emphasising that “many people do not know that they can request protection and say that they want to stay here in Italy. But no one tells them about what they can do: this is the most serious problem, that Tunisians aren’t even listend to. Around 7pm, the police patrol the island and arrest them to take them back to the Hotspot and identify who has been in contact with them, especially after the meeting between the mayor, Martello, and the Minister of the Interior, Minniti.”

Humanity is being lost on Lampedusa, a victim of security and the violence within this system. It remains afloat thanks only to the activists and the desire for truth and justice shown by people who stand strong.

The Difficulties of the Reception System in Trapani

Western Sicily: A Week of Hell

Bereavement for the dead, collective refoulements for the living