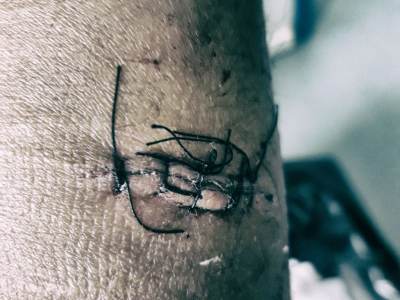 Taken from TerreLibere:  The charges brought by Tunisian family arrive in the European Court. Their rights were violated by Italy, yet again in the infamous Hotspot.

Over a few days, Aisha fainted due to the hunger and thirst she suffered in a boat leaving from Sfax; she saw a brute attempt to rape her mother before her eyes; she suffered a blow to the abdomen during a violent charge by the Italian police. She lives in a constant state of fear that has caused her to lose her senses.

Now the moment has come for payback. Over the last few days her case has arrived in the European Court for Human Rights in Strasbourg. On one side, an eight-year-old Tunisian child On the other, the Italian government.

“There were 40 of us in the boat, and we got lost”, the mother recalls. “We met with a fishing boat. We asked him to take us back to Tunisia. The fishermen refused.” Three days without eating or drinking. Then there was a light in the distance and another nine hours before they arrived in safety, on the island of Lampedusa. It was 2am at night on February 15th. Aisha fainted and was taken away in an ambulance.

The family wanted to claim asylum, but was not allowed to. “For the whole time they were there, they never received any document attesting to the reception of their request for protection”, claims Giulia Crescini, the family’s lawyer.

A woman with her eight-year-old daughter clearly count as vulnerable subjects. Instead, they remained in the Hotspot along with all the others. The “National Guarantor for the Rights of Detained Persons” – a state body – describes the Hotspot as “squalid and slovenly”. There are police and guard dogs in the courtyard, and dirty rubber mattresses. Hot water? Only an hour a day. And a night there isn’t even cold water in the bathrooms. In the morning the sewage accumulates in the bathrooms, “only a few metres from the mattresses.” There are no doors between the dormitories and the cubicles.

Everyone wants to leave. Some even take to extreme measures. One cuts his arm with barbed wite, another swallows a razor blade.

People still talk about ‘W’, who killed himself a month before. Detained for two months, he received the surreal command to leave Italy. It had a psychological disorder, and needed medicine that wasn’t available on the island. He would have been awarded humanitarian protection.

Every aspect can be discussed, but this is certainly not an appropriate place of a young girl who still carries with her the marks of the journey at sea. Instead, both mother and child sleep in a corridor. Together with the men.

One night, Aisha sees one of them get closer to her mother. He molests her, then tries to violate her. It is only her screams that manage to call her partner over, who stops the attack. There are no police present. Aisha is overtaken by a panic attack. She faints. For two hours she is deprived of her senses.

“A policeman pushed and beat with his baton whoever was in line to take their meal, without reason.” A tired group of people asked to leave. “While they were talking with security, three migrants remained back and set a room alight”, explain activists from the campaign “Lasciatecientrare”.

Everything happened on March 8th. “There was widespread panic and the security guards had their batons in hand, which only contributed to spread still more panic among the people who had started to run in all directions, while the police, kitted out in anti-riot gear, began violent charges. Some people managed to get out of the main gate, others got out through a hole in the fence. Others remained blocked and crushed at the entrance.”

“The police responded with force, indiscriminately beating men, women and children”, Crescini reports. A baton hit Aisha in the abdomen. The young girl ended up in A&E. On her bed, she cried out in desperation. “You’ll give me this video?” says an unidentified man at the person filming the scene.

IN the end, the flames worsened the conditions in the centre, rendering it defunct. But another week still passed by for Aisha and her fmaily in the half-burnt down centre.

“I was beaten many times by the police and other grown-ups. A police dog even but me and the police laughed while he bit me and they didn’t do anything.” Ahmed is a minor, interviewed by activists from CIDL, ASGI and Indiewatch, the three organisations that have produced a dossier about what has happened in Lampedusa over the past few months.

“Beatings of guests, arbitrary searches and threats happen on a daily basis” the lawyers claim.

This has been the same story for years now. Lampedusa is a pressure cooker. If the centre is used as a Hub for deportations, the detention times become indefinite. Sooner or later it explodes.

The migrants are only meant to remain for a maximum of 48 hours. But often they are detained for months. This is a “detention without crime”. And since it has become a Hotspot in the European model, everything has simply worsened.

When they arrive on Lampedusa, Tunisians cannot request asylum, even though this is established in international law. At the very most they can “demonstrate the desire” to make the request. Filling out the C3 form is practically impossible. They are considered “economic migrants”, people to be sent back home.

Providing asylum to Tunisians would break the only conveyor belt that works, along with that in Egypt: the conveyor belt of deportations, which every government wants to boast about.

These are the old agreements made with Ben Ali and Mubarak, dealt with not as bloody-thirsty dictators but interlocutors of secure countries. Countries to which anyone can be sent back, based only on their nationality, without considering their individual histories, without listening to what they have to say.

Aisha’s case is exemplary. Her mother and father are separated – a difficult situation in Tunisia – and the mother has a new partner, and wants a better future for her daughter. She accused her ex-husband of violence and left for Italy. She only throught she would need to overcome the sea, not the fortress.

“They gave me a small booklet about my rights, but it seemed like a joke, because they let you read about them, but if you ask for your rights they hit you”, says another Tunisian.

The voices of alarm are increasing on the island, given the Summer season. The “clandestini” keep the tourists away. According to La Stampa, there is supposedly an agreement to not alarm the island on the eve of the tourist season: the migrants have been “discouraged” from walking the streets.

It is the same discussion every year.

Even the status of the “closing/opening” of the centre is a constant.

On March 13th the Minister of the Interior announced a “gradual but swift emptying” of the centre, in light of the renovations.

But at the next landing, Lampedusa risks seeing the same gallery of horrors. Because it is not, and will never be, an prison island.

Landings at Agrigento and Palermo: “Where is my husband? Please help me!”

Lampedusa, drifting dinghy with 107 people aboard rescued during the night

Lampedusa: The transfers and deportations resume, and the protests continue

A Letter from Lampedusa