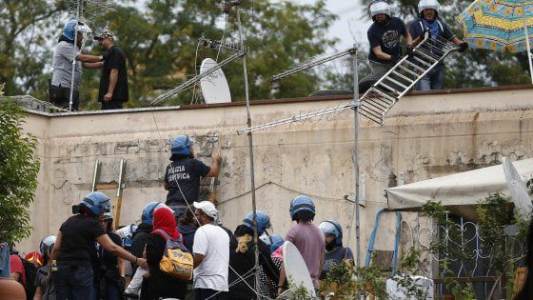 Several dozen vehicles of the security staff and fire brigade, a helicopter, and approximately 200 police officers, carabinieri, and firefighters – to vacate families with children. Among them many Italians, as this is not only targeting foreigners but first and foremost poor people.

For want of castaways that are saved by NGO ships, the government has focused its power and violence on children and old people over the last days to steer away attention from the scandals surrounding Russian money.

Pulling the wool over people’s eyes, distracting, refocusing attention. An Italian shame, a politics of lies, which in any other country with a minimum of democracy would not hold up for one week.

The whole governing machinery working against NGOs (which for more than 3000 arrivals have “only” saved 248 migrants in 2019) only serves to kindle a collective delusion that leads to an ongoing and tragically dangerous detachment from reality.

Catastrophes in the Reception System

Although numbers are low, the difficulties grow due to the ongoing dismantling of the whole first reception system. For a long time, the ministry of the interior has not disbursed the money for unaccompanied minors to the communities and no one knows what has happened to the money that was intended for the extraordinary reception centers. What a perfect excuse for those cooperatives that have always just wanted to make business and continue to provide only the bare minimum.

And in this way centers continue to close down and those that are still open are overcrowded. One has only to think of the situation in the hotspot of Lampedusa in which – while we were following along the news surrounding the Sea-Watch – the center of Contrada Imbriacola was in an inhumane condition, hosting 200 people instead of their budgeted 97 spots. Insufficient hygiene and too few sleeping spots so that many had to sleep outside under a protective roof for a couple of days. There were endless lines under the blazing sun in front of the food counters, the handing out of phone cards patchy, and the legal advice superficial. The irregular transit to Porto Empedocle and the unending arrivals of people docking independently result in a constant state of overcrowding of the Contrada Imbriacola center. This Sunday more people were arriving on the island during two different dockings as well.

In addition to the catastrophic conditions in the center, there is the illegal practice of keeping the arrived people for an unspecified amount of time and outside of procedures inside the hotspots.

In this climate of a war against the poor, the prefectures are calculating with the daily difficulties of the people accommodated in the special reception centers, which tend to be kept going with their old objectives as long as one is waiting for the new tendering.

In Palermo, the prefecture has renewed the extension that was supposed to run out end of July as the allocation has not taken place yet. The most important cooperatives that are still continuing to take in people are on a list for the 1800 spots in Palermo and its province. Two cooperatives – Umana Solidarietà and Azione Sociale – have made too low bids and are now supposed to be investigated by the main person in charge for the tendering process.

In Trapani, on the contrary, the tendering for the administering of the deportation center is currently set up, at the same time as restoring work with lots of public funds that are thrown out of the window for the sake of the umpteenth improvement/restructuring. The infamous Badia Grande cooperative is already taking part in the tendering together with a temporary network of companies, made up of Vivere Con and the consortium HERA (previously Gruppo Intime) and others, among which there is also the company Engel from Salerno that has already made bad press.

In Agrigento, the situation is still gridlocked due to their use of an old contract which has already been cancelled due to its being written according to old criteria. The new version is supposed to be there in September, but in the meantime the centers continue to close down, most recently the center Atfal, along with which the old SPRAR* was closed down. Centers like the Villa Sikania that is also accommodating people that have been displaced from the first reception center of Mineo are full and without any written extension but continue to be used and have declared an interest in the tending with new criteria and payments that have been stopped in December 2018.

In Caltanissetta, on the other hand, the tending for the administering of the first reception centers of Pian del Lago with 456 spots is in an assessment and evaluation procedure of the competing cooperatives, among which there are Badia Grande, Vivere Con, and others connected to the region around Caltanissetta as well as a comeback of the Cascina Global Service.

And while the cooperatives are playing Monopoly with the tendering, the Italian state continues to kill in accordance with the rest of Europe; last week again the bodies of 72 people were washed ashore on the Tunisian coast, but the news has been forgotten again quickly and no one feels guilty. The sea is an innocent observer. The representatives, however, are not innocent and it is them who are playing with people’s lives by selling forged working permits to get a residency permit. Predictably, the security decree has kindled the selling of documents. And almost unnoticed are the news of cases of bad first reception practices and exploitation of workers, cases we have also seen over the last years.

Last week, a migrant has lied down on the ground on Vittorio square in the middle of Agrigento to protest the circumstances of his reception and in Palermo asylum seekers of the extraordinary first reception center Marconi have blocked down everything due to them not having received their allowances.

*SPRAR – Sistema di protezione per rifugiati e richiedenti asilo: Protection system for refugees and asylum seekers, a communal reception system on voluntary basis (no federal obligation), approximately 3000-3500 spots in all of Italy. It is supposed to help with the integration of refugees.

Tomorrow, we will be the castaways

Street brawls on Lampedusa as migrants fight over who can leave

Migrants are arriving at Lampedusa directly