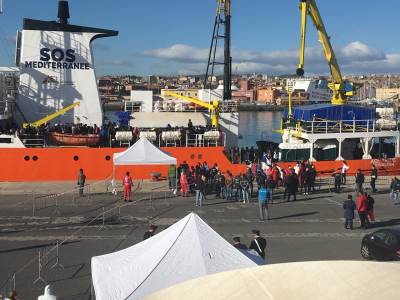 On Monday 27 November the Aquarius landed at Catania with 421 people on board, the majority Eritrean. There were also five men from Egypt, Bangladesh, Ethiopia, Pakistan and South Sudan. The percentage of women on board was very high – 40% – of whom 7 were pregnant. There were 98 minors, of whom 60 were unaccompanied. Three people had to be taken to hospital during the landing operation, including a woman in the ninth month of pregnancy whose waters broke.

These 421 people were rescued on November 25. The migrants had travelled on a small wooden vessel, the women and children packed in the hold with limited air. Fortunately there were no complications during the rescue operation: SOS Mediterranée was the only vessel in the area, who were given the order to intervene in the rescue operation by the MRCC in Rome.

The previous day had developed very differently. During the late morning of Friday 24 November, the NGO SOS Mediterranée identified two migrant vessels in international waters. Despite the need for immediate intervention, the NGO ship did not receive authorisation to undertake rescue activities, because the orders continued to prioritise the Libyan Coast Guard operations, even though they were in contradiction to the needs of the moment.

At the same time, the Aquarius received orders from the MRCC at the same time to remain at a distance and not intervene, even though it was extremely nearby, becausde the Libyan Coast Guard was meant to deal with the situation.

The vessels were reached only after 4 hours of waiting, leaving the migrants on board at serious and life-threatening risk amid the very real possibility of a shipwreck. The crew of the Aquarius were thus forced to look on, powerless, for four hours during the precarious situation of those at sea, and the following rescue operatioin by the Libyan authorities; the migrants were then shamefully taken back to Libya, the country were there had suffered attrocities and only just managed to flee.

The Reception System in Agrigento, Trapani and Palermo: Between Disorganisation, Chaos and Abandonment

What Remains of Welcoming