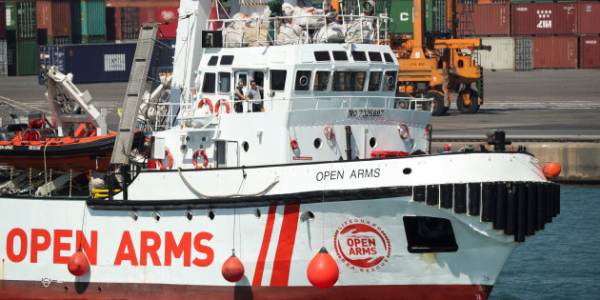 Bullying by power and massacred rights

Italy 2019: a professor got suspended because students used their critical thinking to interpret recent events, leaders of neo-fascist groups are authorized to threaten and attack Roma families assigned to social housing, banners that express dissent are removed, decrees are written that quantify fines for everyone being rescued, the state’s means and resources are used to persecute those who act in compliance with laws, international conventions and above all with human life. The fight against migrants, against poor people, the harassment of the most vulnerable is the propaganda of those who use situations of degradation and poverty to ignite a war between those who are worst off. All this happens in a country where unemployment and the flight of young people leaves entire areas of Italy empty. Political decisions aim to create chaos, impoverishing people and tying them on a leash, making them desperate, not allowed to think. This is a useful goal for those who do not have the faintest idea of what it means to govern a community in a responsible way.

And while no investigation against NGOs has had any substention (at the expense of taxpayers), people at sea continue to drown just to escape and find an opportunity for salvation. Neiba, mother of a young man who drowned at sea some months ago, points out and tells us with strength and despair “no mother would put her own son on a boat or make him cross the desert, unless life has become impossible in one’s own home, in one’s own country. We mothers die twice: the first time, when we do everything to save their lives by making them leave and the second, when there’s no news because the sea has gone along with the will of politics. The sea has kidnapped our children for being guilty of being poor and so, the life of mothers like me, ends there. No mother would ever do that, put it in your head, no mother. I have been dead for a while now, and you are happy with this.”

For those who do not die, hopes for the future do, like Amry: a Tunisian man with green eyes, who hoped to become a model in Europe. He arrived with one of the many so-called ghost landings last week on the Sicilian coast. Together with 20 other people he was intercepted and brought to the detention centre (CPR*) in Milo. A relative of his contacted us and was happy to know he is alive but at the same time worried about his future. Amry tried to cross the sea for the second time but he didn’t make it, last Thursday he was repatriated on a flight from Palermo to Tunis, with all the consequences that await him there: debts, high poverty, repudiation from his family who indebted themselves in order for him to leave, “for us he is dead, we do not want to know anymore.”

What happens to the reception system

While newspaper pages are full of declarations related to the propaganda of the electoral campaign, nobody speaks about what happens in the country. Inside the Sicilian prefectures the reduction of staff that works on immigration is constant, which leads to a scandalous slowdown of procedures, like payments that arrive one year late. But diligence and efficiency are not missing when it comes to the withdrawal of reception. The reception centres that are left are free to operate as they wish, firing operators and qualified staff, making life inside these structures impossible. In various prefectures officials and managers succeed each other, adding to confusion and slowdowns, as they often do not have any experience in the migration sector. For example, in Palermo, officials changed four times in four months. In Trapani a new prefect and a new head of cabinet, while in Enna a new prefect coming from Palermo. Changes and new modi operandi that, according to the operators, slow down the whole process. The extraordinary reception centres (CAS*) left open are full of asylum seekers whose hearings have been postponed to 2021, and as a result, a lot of them leave because it’s impossible to live in structures such as these for such a long time.

With regards to the tender offers, the prefecture of Sicily has different strategies: in Palermo and Messina they are progressing and now the CAS have gotten an extension within the old parameters, i.e. 30 Euros plus VAT per day. In Trapani and Caltanissetta, the centres got extensions because their tender offer was cancelled as it was formulated within the old parameters and now must be reprocessed. In Agrigento there have been no tender offers for years, the last being cancelled because the managing bodies accepted a proposal which brought down the tariffs to 24 Euros per day. Since March 2019 the actual tender offer is pending. For Enna and Ragusa there is no information and their official sites do not show any indications for a new tender offer. In Catania they keep closing the CARA* in Mineo, we therefore need to understand what the government’s campaign will be in order to secure votes, considering there are 1,200 angry people who have lost their jobs. In Syracuse the tender offer was completed at the end of 2018 within the old parameters and will now be revised, although the prefecture doesn’t say which route it’ll take. What we know is that in the meantime some CAS* have been left open, others have been closed. People have been relocated quickly without any care taken of their integration path undertaken up to this point, and with the threat of withdrawal of reception in case they refuse to leave.

A different situation exists for the detention centres in Milo and Caltanissetta as well as the hotspots in Messina and Lampedusa. The tender offers are ongoing while the management works in extension, and there is continuous restructuring: money is being spent to transform centre into carceral structures in the absence of rights.

The centres for unaccompanied minors stay open, waiting for payment from the municipality with two years of arrears. Some managing bodies are forced to sell credits to para-banking institutions that boast public administration as a way to move forward.

In this context people are abandoned, tired and become invisible within Italy or elsewhere. For example, all the people transferred from Mineo to Palermo and Trapani have stayed in the new centres for some days or weeks and then have left. Those who stay are desperate for their appeal hearings, which usually take place two years later. The few minors that arrive do not remain long in the community, especially Tunisian minors. We have yet to see the fate of the people landing in Lampedusa and Augusta, who are transferred to Villa Sikania and Messina.

They are taking away our rights and opportunities, they want us to become violent or desperate. For this reason, now more than ever, we cannot afford to give up and disembark on a violent path, on which they want to push us, arresting us and beating us when we try to have our say. We must continue to resist with our arms, solidarity and justice, remembering that the end does not justify the means.

Translated into English by Helena Hattmannsdorfer

Abandon all hope, you who enter here

Pozzallo. Riots in the Recption Centre

So much hypocrisy and confusion, only one certainty: death – Palermo