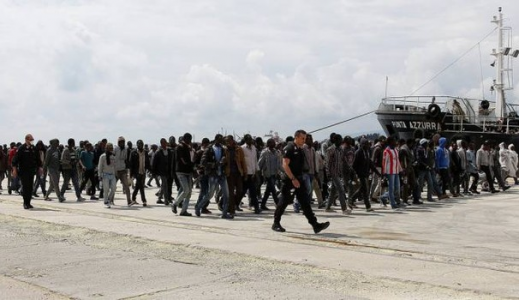 Mohamed and Ahmed (not their real names) arrived in Sicily on the first of July. The Swedish ship BKV 002 to which they were transferred while still at sea brought them into the port of Catania along with 650 other migrants and 9 bodies. “It was extraordinary to think that just one step more and we were in Europe” is the phrase they used on arrival. At least, it was in our first meeting.

Overcrowded buildings and invisible people
The landing operations lasted more than a whole day: Mohamed and Ahmed got to know each other in Libya some months before, and remain united through destiny, put on the same bus when it was already night time. After hours travelling “in pitch black” they arrived in a camp with another hundred people.

“Our camp is not good, we are more than 200 people”, they tell us as soon as we meet them in Pozzallo, together with a dozen of their friends. Just a few further questions and they confirm what we suspected, which is that like many other migrants here for a short spell, they are housed at the Extraordinary Reception Centre (CAS) at Rosolini.

The hostel is managed by the cooperative Alessandro Frasca SAS and situated in Rosolini, in the province of Syracuse. It was opened more than two years’ ago in the premises of the old Piccadilly disco, on the edge of town, along the road that adjoins the service cables to the next town. We have known for some months that the upper floor of the building has been renovated, and that the official capacity of 90 people is often surpassed, leading to situations of unpleasant overcrowding, as Mohamed reports: “As soon was we arrived they gave us a change of clothes, some shows, a towel and a toothbrush, but no toothpaste. If you want to have some shower gel or shampoo you have to ask the staff each time. We’ve now been here seven days, and we haven-‘t been able to wash our clothes even once, because we don’t have any others.” Deprived of their dignity and their rights ignored, they have run from Libya only to find themselves yet again as simply inhuman numbers in Italy. Mohamed and Ahmed are disorientated, confused and are at their wits end. Since the moment they came to Catania, on the same boat that brought in the bodies of those who did not survive, they have asked to make a phone call to tell their families they they have arrived here alive, but still no one has allowed them to do so.

Their excellent English means they can communicate without too much difficulty with the staff in the hostel, but the information provided is nevertheless scarce and insufficient. None of the migrants present with whom we spoke – from Pakistan, Afghanistan, Sierra Leone, The Gambia and other West African countries – were aware of what the next steps would be for them to obtain documents in Italy. Some of them were incredulous when we explained exactly where Sicily is in relation to other Italian cities, while others thought that the Rosolino finished at the end of their hostel, because they are still not allowed to go outside unaccompanied!

The fact that they are not allowed to move around alone, a severe limitation on their freedom of movement, is just one of many illegal practices perpetrated in the centre since it was opened. As we have continued to report over the years, on the pretext of not exposig the migrants to racist and xenophobic attacks by the residents of Rosolini, the managers of the centre are opposed to allowed the refugees to leave the building of their own accord. This is an entirely unjustifiable decision which the executive continues t maintain while nonetheless attempting to diminish the severity of this choice by organising bus trips with small groups of the “guests” to Pozzallo three times a week.

“We live in rooms of 20 or 10 people, sometimes more. The mattresses are arranged on the floor, covering the whole pavement. People sleep anywhere, and there isn’t even space to walk. There are around 8 showers spread across the 2 floors, but we spend most of the day queuing up: for lunch, for dinner, to go to the bathroom”, ‘C’ tells us, originally from The Gambia and hosted at Rosolini for a month now. “I’ve been asking to see a doctor for a week because I’ve got a bad cough, but they just reply ‘tomorrow, tomorrow’, and the pain is still there.” The young men confirm that some migrants have been in the hostel for many months with serious health problems, and it seems that medical support is provided solely by staff from the charity Emergency, who visit the centre three times a week with their “Polibus”.

From Landing to Reception: Rights To Be Won

There are a large numer of young men from Pakistan at the centre in Rosolini, who reached the Sicilian shoreline from Turkey, in one of those independent landings which are, by now, common on the coasts of Syracusa. “We were at sea for eight days before seeing Italy. We had very little food and even less water, treated like gold. When we were picked up by the police, many of us were babbling, but we were nonetheless left for several days at the port of of Augusta”, one of them tells us, who we met again in Pozzallo, some weeks after our meeting with Mohahamed and Ahmed. He’s the only man in his group who speaks English. “They put a lot of pressure on us at the port to give our fingerprints, without explaining anything. Will we be deported? Can we go to another camp? What happens if we leave Italy? Some of the guys who came before us received some information, but not us. Aside from them, no one has responded to any of our questions.”

Months have gone by since migrants arriving in the port of Augusta have been telling us about similar episodes, “There were families with small children kept without food until they had decided to be photo-identified”, C tells us, who fled from Italy a few days after his arrival, “even if I had left my fingerprints, I refused to submit to a law which tries to control every step in my life just because I’m not European, so I tried to run away all the same.” The majority of the migrants we meet in the hostels did not seem to have been adequately informed about the consequences of the fingerprinting and the Dublin regulation. Illegal practices are still the norm, and the opportunities for safeguarding increasingly determined by chance. While the situation at the tent-city in Augusta seems only to be getting worse, there is still no official reporting of the situation to the authorities by the “humanitarian” organisation that have been working here for years.

The word “deportation” triggers off a series of questions and alarms among the migrants. “We don’t understand our situation. Only that we have to wait, but we don’t know what.” Their conditions are at the limit of survival, and a state of constant instability and insecurity which has been goig on for months. This is the feeling for many of the “guests” at the hostel in Rosolini, where the Prefecture has sent them, even when the number of people goes beyond 250 people. Some of the migrants have even been transferred from the Hotspot in Milo.

“Two days ago a group of around 50 people, mainly from Pakistan, left the hostel of their own accord. They were at their limit. After less than 24 hours, when they had walked a dozen kilometres in the middle of nowhere, they came back to the centre. The managers simply called the police, and after some mediation by the officers and a night sleeping outside, they were allowed back into the CAS, in the hope of being transferred as soon as possible.” ‘C’ takes on telling us this episode and translating our conversation into Urdu for the other men present, just as he does for all of the communication with the hostel’s staff. None of the Pakistanis has had the chance to meet a mediator, despite some of them having arrived three months’ ago.

A week on, the situation at the CAS seems only to have got worse, combined with the terrible heat, new arrivals and the exhaustion of the staff. “We don’t want to just survive, we want to build a future here, like any Italian”, ‘C’ continues. “In the same way that I got here, I hope that I can keep going and try and find a better place. Because there’s so many of us here, no one listens to us, but on the other hand there’s a group of people who you can count on.”

Hotspots for Migrants, „an uncontrollable meat grinder that is soon going to be clogged.”