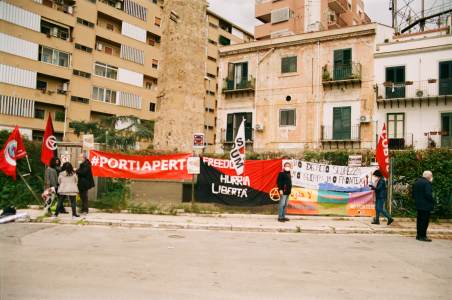 As it has been happening every month for the last year and a half, on Wednesday September 29 a quarantine ship, the GNV Atlas docked at the port of Catania.

Unlike to what we have been recounting over the past year and a half, however, this time the quarantine ship did not disembark its “passengers” in silence encapsulating them in buses headed for reception or detention centers scattered throughout Sicily and Italy. This time, the quarantine ship’s disembarkation was noisy. In fact, from Wednesday morning until the next day, more than a hundred people – mainly from Egypt, but also some from Tunisia and Morocco – were let go with a rejection notice indicating that they had to leave Italian territory within seven days through Fiumicino airport in Rome, although many of them had applied for international protection on several occasions.

The square in front of the station in Catania was filled with visibly tired and disoriented people who did not know clearly where they were but knew what they wanted: to leave. Thanks to friends or relatives in other parts of Italy and Europe the people at the station organized autonomously to continue their journey on the European continent.

However, they were confronted with the new hygiene regulations once they disembarked from the quarantine ship. As a matter of face, in order to leave the region by bus or train it is now necessary to have the so-called green pass or a negative swab done within the previous 48 hours. And, although they were given an antigen swab prior to disembarking from the quarantine ship, for those of them who failed to leave within the same day, the 48 hours expired the following morning.

It is in this context that the interests of Italian politics – to get as many people as possible vaccinated without having to announce a vaccination requirement – is transformed into yet another barrier for people in transit. Since a few weeks, in fact, for those who do not have a green pass, swabs – even antigenic ones – have been on payment. That constitutes a serious problem, especially for those who arrive from the other side of the Mediterranean often without money and documents.

As an association we have supported logistically ten people who needed to get a swab and who after more than five hours of struggle with the bureaucracy of the vaccine hub and the swabs were finally able to depart.

Actually, already during the summer people were reported at the Catania station, a sign that the migration management system that worked during the last year of pandemic is changing again. In fact, starting from May the constant arrivals on Lampedusa and all the coasts of southern Italy have put a strain on the rapid and silent passages from the hotspot of the island to the quarantine ships to the centers – reception or detention.

Overcrowding, poor hygienic conditions, protests, escapes and complaints followed one another leading the Italian government in full agreement with European plans towards “innovations”, always with the motive to accelerate the process of outsourcing the southern border. Subsequently, the government has refinanced the agreements with Libya and Tunisia, reinforcing both the coast guards that with the collaboration of Frontex try to stop boats crossing the Mediterranean before they can reach Italian territorial waters. These agreements are going ahead on a political level without any opposition, while several Italian courts have been declaring Libya an unsafe country for several years.

On October 14 the condemnation by the Court of Naples of the commander of the Asso28 who delivered the recently rescued migrants to the Libyan coast guard took place. It is within this strategy of externalization of the border that in the last few months – and in particular during last spring – hundreds of Egyptians have been repatriated to Egypt or, inexplicably, deported to Tunisia, a country three thousand kilometers away from theirs. An illegitimate practice that adds to the already disturbing and worrying application of the readmission agreement signed with Egypt in 2007.

The Italian government, in spite of the Regeni case, the Zaki case and all the denunciations of the serious violations of human rights in Egypt, continues to pursue a close and shameful collaboration with the country of Al Sisi. The fate of being repatriated to Egypt could have affected the hundred people who landed in Catania on September 29th – after a passage in CPR* – if it had not been for the mobilization of LasciateCIEntrare that has managed to galvanize the UNHCR. The pressure on the Ministry of Interior have served to avoid detention and subsequent repatriation but it was still a mass rejection, which denied these people access to the application for international protection.

Shifting the gaze: what is happening in North Africa

The effects of the shifting of the border to the south of Sicily are already evident and during these weeks there have been two emblematic cases. At the end of September four boats with sub-Saharan people on board and three with Tunisian people were intercepted by the Tunisian coast guard shortly after leaving the country’s coast. Immediately after the boats came ashore the sub-Saharan people were violently taken to the Tunisian-Libyan border and there, with guns pointed at their faces, they were deported across the border into Libya, abandoned in the desert, where one group was kidnapped and another arrested and one woman gave birth.

And in Libya the situation continues to be dramatic. In the same days as the events at the Tunisian border and the landing of the quarantine ship occur, a police raid led to the arrest of thousands of migrants in the suburbs of Tripoli in an alleged anti-drug operation. People were taken to several centers where there was violence and where six of them, in an attempt to escape, were killed by police gunfire.

Following this episode, hundreds of people – which in the course of the days have become thousands – have camped in front of the Community Day Center (Cdc) of the UNHCR to ask for immediate evacuation from a country where their lives are at risk. Without any concrete response from the international organization, the presidium has been going on for thirteen days and shows no sign of stopping.

It is important to recount episodes like these because it is not true that in North Africa people just suffer in silence. Resistance exists in Libya just as it does in Tunisia, as demonstrated by eleven Tunisian women who came to Italy between October 2 and 7 to continue the search for their missing children and to denounce the violence of the border that kills or makes them disappear in the middle of the sea breaking ties and leaving the lives of mothers, sisters, fathers and brothers in an infinite limbo in search of the truth.

They have come to seek the truth about the disappearance of their children and to weave the threads of a new bond between the different shores of the Mediterranean, which starting from a path of active memory that remembers the names and voices of the people who disappeared in the Mediterranean asks for justice and proposes an alternative. We met them and we understood.

Arrival of migrants in the port of Catania: all adults illegally deported back to Egypt

The Diciotti Case: June 22nd convention at the courthouse in Catania

The Diciotti Crisis. Interview with Prof. Mangiameli: “Migration Isn’t an Emergency, It’s A Constant Part of Our History”.

Who is doomed to pay?

The CARA of Mineo: The Ghetto Wanted by the Lega Closes Down after Eight Years