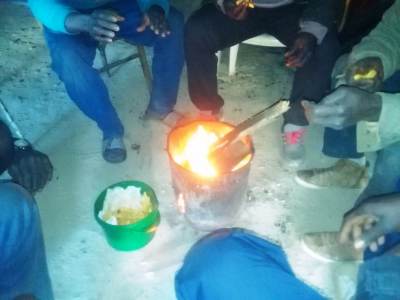 How would I tell my parents, who have been paying debts for me for six years, that I want to come back? You know, whenever I send them an amount once a month, even if it’s only 40€, they are so happy. That is the only moment when I am not feeling bad. They think that I live in a beautiful house with everything I need – that’s what I told them. How could I tell them: ‘Mom, Dad, I failed, I want to go back’? I feel bad,
I need help, and when I dial the [emergency number] 118, nobody comes anymore. Last week they came after six hours and they yelled at me because they are tired of coming here every week. Please, call them. Maybe they’ll come faster. Please.”

The words just bubble out of Tounkara. He lives alone under four corrugated iron sheets, in Campobello, surrounded by asbestos and old, bad smelling blankets. Every day he feels the humiliation of a criminal
system that doesn’t want him. The humidity, the lack of food, the hard work, but above all the neglect into which our society has forced him, are a threat to his health. But apparently not even the doctors can – or
want to – understand his suffering, because Tounkara is now a regular in the emergency room. That’s what they told me last night when the ambulance arrived 20 minutes after my call.

“You see, I was right. The word of a white man is enough to get them moving. I am an animal to them, if at all, because they don’t pay any attention to me. When a cat or dog is run over, people are more shocked and affected. Nobody stands up for me. Nobody sees me. For many people I am invisible. Alberto, nobody sees me anymore, and maybe it is better that way, because if someone would see me like that, I would only feel more miserable. I am deeply ashamed.”

When he apologizes to me for disturbing me during the night, I have the unpleasant feeling of being an accomplice to this system. The accomplice of a criminal society that destroys the weakest, makes the poor invisible, flexes its muscles, governs by force and that without hesitation shows fascist behaviour.

Unfortunately, only few of us understand that the current political decisions are an attack on everybody, not only on migrants, who in this moment serve as a perfect scapegoat for this Europe without memory.

How bad and stupid this policy is can also be seen in the abolition of good practices in the reception and accommodation system. The public calls for tender published in response to recent ministerial decisions
favour only those who are known to offer poor accomodation. The abolition of decentralised accommodation eliminated the only practice which could bring real benefits to those concerned and which took account of the professionalism of many – now unemployed – social workers. This radical cut in services basically affects those who were concerned about dignified reception practices. Instead, only inefficient one-way measures are being created today, which make any form of integration impossible from the beginning and create the best conditions for the exploitation of both migrants and employees.

The young precarious workers and the young migrants who have come across the sea are well suited to be exploited in agriculture, in call centres, as bicycle couriers or in other underpaid jobs. In addition, the bad reception practice can currently triumph without any control, because only the dear friends from the cooperatives have remained, who get their hands dirty at the expense of their own colleagues, at the expense of those who have a sensitivity that is difficult for the associations to digest and who are always the first ones to lose their jobs. And if you do not adapt to this logic, you will be punished. That’s what happened to the organization “I Girasoli” from the Sicilian town of Mazzarino: Its minibus was probably set on fire because its members have been trying for some time to work with passion and attentiveness for their neighbors, whether they were workers or guests.

Unfortunately, it is becoming increasingly common that a young man calls and says that he has left the accommodation assigned to him (and thus the reception system), because it is empty, isolated and offers no perspective at all – exactly as the government wishes. Lamin, for example, did not even wait for the decision of the territorial asylum commission, but immediately decided to leave the centre in Partinico. He had been brought here although he had attended secondary school in a completely different city and was unable to continue his studies due to the relocation.
Pushing people back and forth like packages. Brainless decisions such as the one to set up a reception centre for Nigerian women, many of whom are potential victims of human trafficking, in the centre of the city of Palermo, which, due to the high density of people involved in human trafficking, is really the most inappropriate place for that.

In this race to hide the poor and to destroy workers’ rights, there are still many who lose their lives and many who desperately search for their relatives. Like Moustapha, who has been looking for his brother for two years now. He has not heard from him since he got on the boat. He continues to search everywhere, calls every international organisation and receives no reply.

Tounkara has slept on a bed for a few hours, which for him is already a miracle … “The doctors are convinced that I’m doing this only to be able to put my head on a stretcher, but believe me, this is not how it is. I feel really bad.”

A Dog Is Worth More Than A Black

The end doesn’t justify the means

Borders, Reception and Rights in Sicily and Europe: Workers, Legal Experts and Researchers in Conversation