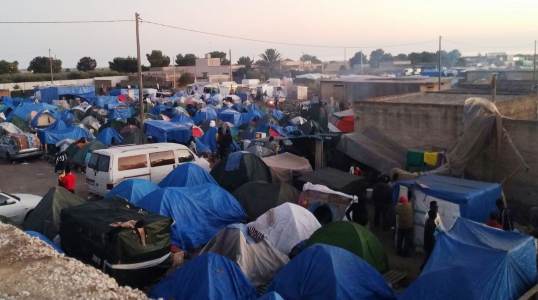 “A friend told me that I’d find work here, that I’d earn some money, given that I need to put something on the table for my wife and daughter, and I’d lost my job in Rome, where I’ve lived for many years now. They didn’t tell me that I’d be coming to a living hell.”

“I’m ashamed to live in this place, and I’m ashamed to tell my wife about it, so I just laugh when I’m on the phone. But I want to go back, even if I can’t. So let myself be exploited, I allow you Italians to humiliate me for a few Euros, at least that way I can give something to my daughter at Christmas. We’re Muslims, but she’s born here so she wants to celebrate it like the rest of the children. To me she’s Italian, but for you we’re only “non EU”, which means we’re simply slaves. Please, don’t take my photo, I don’t want my daughter to see my by mistake, or the mother of one of her friends, not like I am right now. It would just make her even more marginalised.”

The words of a father, one of many who we met in the township which has grown up on the edge of Campobello di Mazara. A town where the air is unbreathable and the hygienic conditions are the same as a rubbish dump.

Like other non-places, it is permeated with a sense of humanity’s defeat. And like other sites, Campobello follows the rules of criminal laws that “produce” invisible people ready for use, in order to maintain an agricultural economy that by now survives thanks to the new slaves – people who are relatively young and relatively integrated into Italian society, but always nevertheless slaves.

You get the feeling that we have killed Ousmane a second time round, because the living conditions in the shanty town around Erbe Bianche are even worse today than when Ousmane was killed thanks to the politics which only looks after the interests of the producers and the multinational olive and olive oil businesses.

After three years of the camp on the grounds of the old oil factory at Fontane d’Oro, this year the Prefect and other actors engaged in the harvest made a shameful decision: everyone waited for the workers’ arrival, while civil society attempted to find some form of dignified solution. In the end they decided not to decide and thus to end the utilisation of the old oil factory, risking the creation of conflicts among the migrants arriving for the mere 250 places authorised inside an area which, for three years now, has been the olive pickers’ home. And even this policy failed miserably while the migrant workers, through a kind of solidarity (a kind which is by now unknown even to the ghostly groups of radical struggle, always looking for notoriety and visibility) decided that no one would enter, and left the entire space empty.

They came to the decision based on the fact that only a certain number of people would be able to enter, leaving more than 1,000 people outside. In any case, the criteria of entrance set were, for the majority, unrealistic. We would like to ask the mayor how the €52,000 of public funds were spent, received for the reception of the seasonal workers, given that the former oil plant – when we entered it – was completely deserted, with the toilets and showers filthier than ever and the water as cold as always. €52,000 for a fence? The fence that surrounds the building, separating from a refugee and asylum seeker hostel,* was the only thing visible.

We have many other questions which remain unanswered, because the entire scene of the shanty town leaves us speechless, amid the knowledge that this is down to a matter of institutional will, a fact which leaves a bitter taste. Humanity ends at Erbe Bianche, the now infamous field of Campobello, and we wonder how these men and women many to tolerate this level of abuse after everything else they have passed through.

“I’m an engineer, I’m 58 years’ old. I’m Sudanese and I’ve lived in Rome for 19 years now. As you can see, I live out of my car, which I use to collect wood and heat up water, which I then sell for 50 cents per bucket. I can’t do the olive harvest but I’ve come up with this service, otherwise my friends would die from the cold. We don’t have water, we don’t have electricity and with four sheets and four bits of wood I managed to make a shower, and its better than the ones provided by the local council, first because it’s clean, and the water’s hot too. And then there’s the smell, those portaloos have been there for over a month and no one has ever come to clean them. There’s the risk that we’ll go home with diseases. How do you people think 20 portaloos are going to stay clean with 1,800 people who come here all dirty from the fields? That’s 90-100 people per toilet. It’s not civilised.”

We cannot say otherwise. We continue our tour around the shanty town of Erbe Bianche, within the precincts of Campobello, where we find the tobacco shop, the ethnic restaurants, the green grocer, the shoe and clothes shops, the butcher and a barber too. A small dirty city, with a bad smell and abandoned to itself in which we find plenty of unaccompanied foreign minors who have run away from the hostels they were parked in, or minors who have come down from the north of Italy to lend their parents, who have lost their own jobs. The majority of the workers are Senegalese but there is a strong North African component, and someone even still has the small bag he was given at the landing, when he received a “seven day paper” (a rejection notice). Everything is here, nothing goes amiss: not even the young Nigerian women who are prostituted in the tent of someone who has thought to use even this occasion to make some money. A city entirely in the dark, where night time descends rapidly and where discrimination is simply everyday life.

The locals have a curfew in the late afternoon, so the migrants are the only people who wander Campobello itself, spending their small earnings in the local cafes and stores – and despite this, racism thrives.

This year, once again, there has been a definite refusal to rent rooms to Blacks. There is no adequate medical service and the ambulance does not respond promptly if called. The young men tell us about many ugly episodes, and we were present for one of them: we saw for ourselves that the ambulance did not respond to the migrants’ own call, while they responded immediately when the call came from us. The ambulance arrived in 10 minutes (they had been trying for at least 2 hours). As soon it arrived, the driver and the nurse made the woman who had been taken ill get into the ambulance, and said they were tired of being a “taxi service for these penniless niggers.” It was our presence alone which managed to calm down the exasperated and tired people around us, by asking the diver to simply do their job and leave the evaluation to the doctor. For the record, the woman in question was admitted for blood pressure problems.

F., another Senegalese man, tell us: “I’m not coming back here anymore. I came here from Borgo Manero where I was working on a farm, and I thought that, as there’s no work for the moment, I would come here for the first time to work. But three Euros per crate isn’t work, it’s slavery, and living in these conditions is simply impossible. I’m going to do one more week and then I’m getting out of this hellhole.”

“I’m here while waiting for my ‘permit to stay’ to be renewed. I’ve been waiting two months now, and they still haven’t called me, and I need to survive. Why do you need to wait for so long to renew a permit? It’s not possible, I’m feeling ill, it’s cold, we’ve living in the mud and I still have to keep on waiting.” Institutional abandonment, bureaucratic delays that simply alllow other forms of hidden economic exploitation to grow within the new shanty towns, like fake contracts and forged residence skips, in order to be able to renew a permit, and all sorts of other methods which simply favour the business surrounding migration.

As we were about to leave, we picked out way through the asbestos, carcasses and mud once more, passing between Nigerians, Senegalese, Tunisians, Gambians. All of us asked for help with their permits, and someone who did not know us offered his labour: “I want to work, I’m young and I’ll take anything.” Unfortunately we had to disappoint ‘S’., an 18-year-old Senegalese teenager from Milan. He has finished school and has no way of progressing to university. We speaks excellent Italian and wants to help his mother and two younger sons. ‘S.’ has not told his mother where he lives and what work he is going, he simply told her that he is surrounded by friends.

No doubt: 1,799 friends, who help and respect each other, but who are not respected by us, because we want slaves, the new slaves.

And while we were leaving, people were coming back from the fields by foot or on the farmers’ pickups, making appointments in the piazza of the new little town, for another 14 hours of hard labour for three Euros per crate.

We remember when we go to the supermarket how often our oil is infused with the blood and sweat of the new slaves.

AN ATTACK ON FUNDAMENTAL RIGHTS