The Mediterranean returns the bodies of the victims of another shipwreck that occurred in mid-September off Zarzis in southern Tunisia. The families of the drowned and citizens of Zarzis fight for human rights and a binding commitment from authorities to recover the other bodies lost at sea – they demand dignity and justice.

On September 21, two women with a one-year-old girl and a two-month-old infant as well as 15 other people (of whom the oldest was just over 25 years old) departed from the coast of Zarzis towards Europe aboard a boat. Two days after their departure, receiving no signs of life, the families alerted Tunisian, Italian, and Maltese authorities along with civil search and rescue vessels. Faced with the mere passivity of national authorities regarding the urgent demands to find their missing relatives, the local Fishermen’s Association carried out four search and rescue operations autonomously.

On October 2, the shipwreck was confirmed as the body of a woman, Malek, was found on a beach in Djerba. Photos of other people whose bodies were cast up on the Tunisian coast, began to spread. Bodies that, only shortly after, were buried in the Zarzis cemetery without prior DNA testing. On October 12, one family’s suspicion that they had recognized their loved one, Aymen, from the clothes he was wearing at the time he left, was confirmed by DNA testing conducted after the body was exhumed.

To date, seven bodies have been identified. However, for the families, the confirmation of the shipwreck is by no means their final step in this tragedy, nor does it equate to salvation from their despair. It is utterly important to identify the bodies through DNA testing right after they wash ashore so that families can ensure a dignified burial for their loved ones.

For several days, the city of Zarzis had been the scene of protests by families, students, and social associations. They demand the truth about the disappearance of their fellow citizens and condemn the practice of the authorities – which has been taking place for decades and not only in Tunisia – to bury bodies found at sea without prior DNA testing. In our view, however, the mobilizations of anger and protest are evidence of a much broader denunciation of the increasingly harsh policies of externalization. By criminalizing Mediterranean rescue routes, the crossings become even more dangerous and life-threatening.

This tragedy took the lives of 18 people and is not an isolated case. In this racialized geography of contemporary Europe, more and more people lose their lives. In 2022 alone, at least 544 people went missing off the coast of Tunisia. Recently, more bodies were recovered from the Mediterranean following the Teboulba shipwreck in the province of Monastir. These tragedies shed light on the racist and securitarian matrix of border control and the visa regime and expose the disregard for human life.

Shocked by another tragedy that affects each of us, the signing organizations:

This appeal has been signed by:

Translated from Italian by Marah Frech 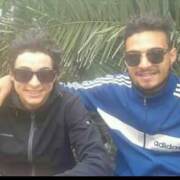 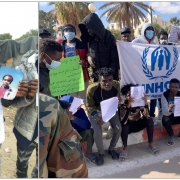 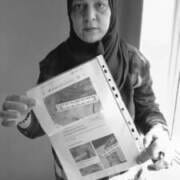 The Unbearable Weight of Indifference 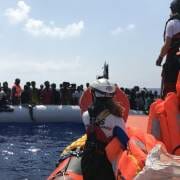 A boy from Chad behind bars: Is this justice?

When UNHCR in Tunisia throws refugees out on the street, as if they were trash