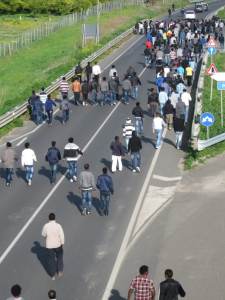 by Leone Venticinque, for the Citizens’ Committee of the Mineo,
Caltagirone Support Group. And so this most recent manifestation which has
been carried out since the Mineo Cara (Hosting Centre for Asylum Seekers)
became fully operative, brings the total number of protests to nine. Is it a
lot or a few? What is certain is that the continuation of the root causes of
what is leading to these protests has not been addressed by those who, as it
would seem, have so many more important things to do than
listen to the legitimate reasons for this disaster which has been created by
those who are being paid to run the structure. Just to make it clear, here not
only do we intend those running the centre but also those who are paid to
prevent rather than comment on the problems when they become visible and can no
longer be hidden.

Up until today, the migrants have been referred
to as “guests”, but if we care enough to actually listen to their
point of view, the more appropriate term would probably be “semi-
detainees”. I am using this term because even those in prison have the
right to food and lodgings yet it still means they are prisoners. In this case,
the refugee asylum seekers receive food and lodgings but yet this does not take
away from the fact that they have to wait months or even years to have the
freedom to leave the Cara and their living conditions remain indefinite all the
time it takes for their asylum applications to be processed, at which stage
many of them will be returned to their countries of origin. The only liberty
available to them at the moment is that of being able to mix with illegal
employment rings or to prostitute themselves on the streets.

Having received information via the Catania
Anti- Racist Network, as a member of the Citizens’ Committee of the Mineo,
Caltagirone Social Group, I arrived at the manifestation at about 13h00. It had
started an hour previously. I had to find a way to get round the road blocks
which had been put up by the police. Their function being to prevent anyone-
especially the media- from having access to the area which had been declared
dangerous and a risk to public safety. Amongst the hundreds of protesters which
lined the main Catania- Gela road, heading in the direction of Palagonia, I met
some people who I had already met through the legal advice service which is
offered for appeals against asylum rejections and also at other events such as
the meeting organised two days ago by the Catania Anti- Racist Network in front
of the Cara and similar, organised by others who are active in the fight for
human rights. The migrants accepted my presence and so I felt at ease to move
amongst them. There are some videos showing conversations and short interviews
in English. Some of the migrants openly show their faces while others choose to
remain anonymous in order to protect their identity should there be any
negative repercussions.

After walking several kilometres,
during which obstacles of all types were encountered along the way, the
procession stopped at the Ramacca- Palagonia junction. Here, the protesters
split up into smaller groups which proceeded to block the main street in both
directions, as well as all the slip roads leading to the flyover. The road
block held out as long as was necessary for the press and the media to arrive
and hear the heated declarations of the protesters. As far as possible, I tried
to stay faithful to my beliefs as far as, not only the forces of order were
concerned, but also for the drivers and the workers who had found themselves
blocked, unable to go anywhere- neither forward nor backward for who knows how
long, and the obvious exasperation which the situation generated. Nonetheless,
the resentment felt on both sides did not degenerate into fighting. If this had
been the case, the protesters were ready with stones, bottles and iron bars in
their fists, ready to get their point of view across by any means.

In the middle of the afternoon, many hours
after the protest began, the first television journalists arrived to report on
what was going on and to interview those in charge. It should have gone some
way to satisfying those who for too long have suffered and continue to suffer the
institutionalised indifference and the superficial interest of the opportunists
who in each and every asylum seeker see a source of money which is to be kept
and held in one place for as long as possible, because otherwise for the entire
Caltagirone district, “without the Cara there would have been total
disaster.”

For the rights of the asylum seekers who once
again today have shown their enormous courage; for a land which does not accept
being stuck with the image of a miserable parasitism that others want to tarnish
it with but one which is still ready to bet on its own ability to produce and
to live from dignified work; in the name of the Citizens’ Committee of the
Mineo Caltagirone Social Group, I will be ready tomorrow as in the near future
to report on the will and the actions of the asylum seekers fighting for their
rights, the only way to make themselves heard by the institutions responsible. I
stand against all outspoken and hushed up propaganda attempts made by all of
those who exploit be they large or small. May 2013 be the year in which the
Cara closes, substituted finally by a real type of reception present in all
boroughs in the Caltagirone area, with manageable numbers based on concepts of
solidarity and integration as well as providing the possibility of creating
jobs especially for those who live in this part of Sicily.

„The hotspot does not affect our work“. Der Hotspot beeinträchtigt unsere Arbeit nicht

Report from the Mineo Cara (Hosting Centre for Asylum Seekers)

“They Leave As People, They Arrive As Ghosts” Shipwrecks And Push-Backs At Sea. Italy Closes The Doors, Including To Those Who Manage To Arrive